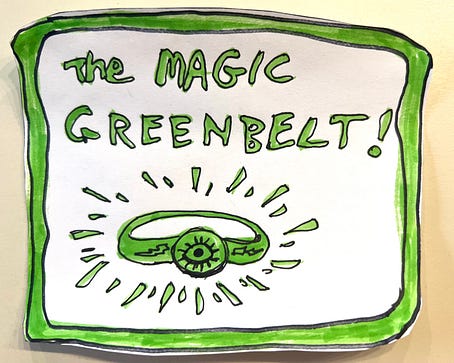 Will Douglas claim riches and power by seizing the Magic Greenbelt, only to lose his Superpowers? Thrills! Action! Amateur drawing!
By Margaret Atwood Jan 22 2023

Yes, kids, it’s Comix Time! The backstory: Our Hero, Douglas (admonished previously in these pages, more than once, scroll down) wishes to claim the Magic Greenbelt as his, all his.

(Translation for those living elsewhere: Douglas Ford, through a strange series of events, found himself the Conservative Party “Premier” (chief honcho) of a province called “Ontario” in a country called “Canada.” He then ran an election, winning in part by promising not to touch the Greenbelt, a tract of land comprising wetland, valuable farmland, First Nation sites, and forests, which had been “protected” for “perpetuity. Voters believed him. But then..

He was sorely tempted. In the hands of developers, think how valuable that erstwhile “protected” land would become! Why respect either previous “protections” or his own solemn promises? Why not say he’d build a new highway, and justify the broken promise to voters by saying this would cause much-needed “affordable housing” to be built? (Real affordable-housing experts and advocates quickly pulled the stuffing out of that one.)

Is there really a Good Angel debating with a Bad Angel for the soul of Douglas? Hey. It’s a comic.✓

But some folks smelled a fish in the woodwork. Voters were more than annoyed that Ford had broken his solemn promise – not only voters in irritatingly urban Toronto, but those in the small town and rural areas — traditional Conservative ridings — who had brought Ford to power, and who felt they’d been suckered because they’d believed him about the Greenbelt. (A poll of a few weeks ago found that 67% of Ontarians disapproved of Ford’s Greenbelt grab.) And a bunch of Conservative MPPs (members of the provincial parliament) had been elected by very narrow margins: they were now vulnerable.

In addition to that, journalists at (initially) The Narwhal and The Toronto Star began commenting on the fact that a bunch of land in the area to be grabbed had changed hands to developers Before Bill 23 Was Announced. Buy low, develop, sell high: nice work if you can get it. Were these developers tipped off?

The Integrity Commissioner is doing an investigation – was the fix in? As is the Auditor General: who spent what on what, and how much public money is this highway going to cost anyway, and are private enterprises about to make a killing off the taxpayers? Cui bono? Who profits? The best detectives always ask that! The Ontario Provincial Police are said to be taking an interest, as well.

To quote Mike Schreiner of the Greens: “There are serious unanswered questions about how certain Conservative connected land speculators knew to buy the parcels in question – some of these transactions occurring mere months before the government’s announcement. We need to know how much this deal is costing taxpayers and why the Ford government is putting private interest ahead of public benefits.”

There have been protests all over the province. They show no sign of letting up. There’s another one tomorrow at Queen’s Park (Q.P. translation: the place where the Ontario Parliament disports itself).

That’s The Magic Greenbelt Comic, as far as I’ve got. T.B.C. means To Be Continued✓

Should the caption below be Over My Dead Body? Just Asking.