‘Lots of concern’ about planned development near Casino Rama 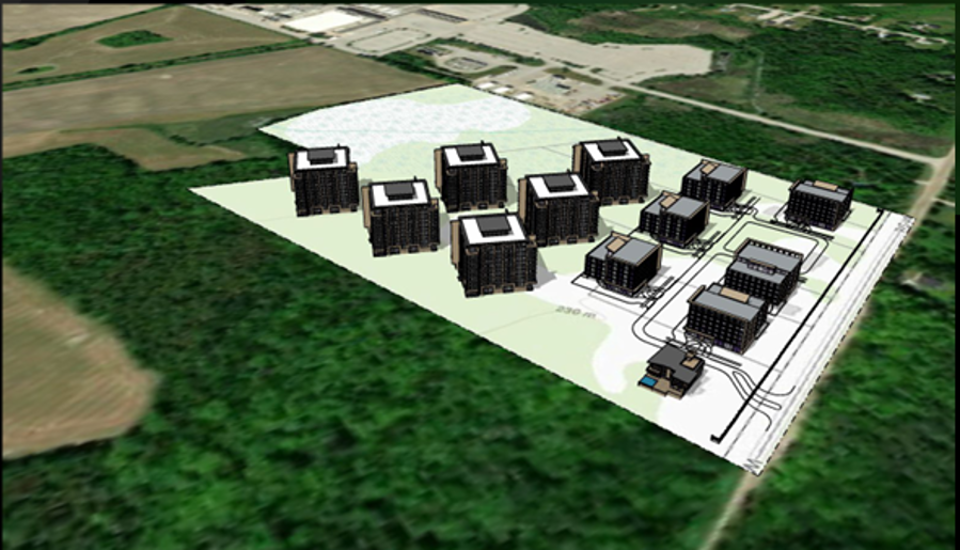 Al Soorty Developments is seeking a minister’s zoning order (MZO) to move forward with the project, which would bring hundreds of senior and residential suites in a mix of six- and 10-storey buildings.

Representing the developer, consultants John Mutton, of Municipal Solutions, and Melanie Horton, of Escher Planning, presented their request for an MZO at the Dec. 12 Ramara Township council meeting.

“The opportunity here is a fairly unique retirement and residential development, right near Casino Rama,” Horton said. “There’d be over 500 senior suites, as well as 900 residential suites, and there’s 12 buildings in total, some six and (some) 10 storeys.”

An unevaluated wetland sits on the site.

“There is a natural area, an unevaluated wetland, (on) the western part of the site … and we have looked at this with an ecologist, who indicated there’s plenty of room … to accommodate servicing and parking outside of that,” Horton said.

The developer is seeking a zoning change from destination commercial to allow for a mix of residential and commercial developments on the property.

As the site’s current zoning was the result of an MZO in the 2000s, an additional MZO is required to change the zoning, Mayor Basil Clarke explained at the meeting.

“Normally, if we want a change in zoning like this, we would have a public meeting and change the zoning,” he said. “The problem is it’s an MZO … that created this destination commercial. We don’t have the authority to change it.”

At the meeting, council directed staff to draft a report considering affordability, servicing costs, and environmental concerns regarding the project and the MZO request for consideration at a future meeting of council.

However, several members of council raised concerns about the proposal.

Coun. Dana Tuju took issue with the powers granted to developers through MZOs.

“Considering the recent passing of Bill 23, an MZO removes most municipal oversight and reduces environmental assessments to the point of being meaningless, since they happen after full approval has been given,” she said.

“While we do need affordable housing for our aging population, we do not need to surrender oversight to the province. This MZO would give the power to the premier with the stroke of a pen to allow the developer to do whatever they want, no matter how irresponsible or unsustainable, and it would be irrevocable,” warned Tuju.

Horton assured the municipality would still play a part in approvals for the project.

“There are further municipal approvals, such as a plan of subdivision and subdivision agreement, that would follow the typical planning process, including all the requisite studies,” she said. “I don’t want there to be any misconception that an MZO provides a blanket (to) do whatever you want.”

Tuju also cited numerous environmental concerns about the property, due to the nearby wetland and its proximity to Rama First Nation.

“Emails sent to council over the last two weeks demonstrate that the residents feel very strongly about this, and as someone who is elected on a platform of environmental sustainability, I cannot in good conscience ever consider being part of requesting the MZO,” she said.

Coun. David Snutch asked for pricing on the units in the development, but Mutton said he would have to get back to council with those figures.

Clarke requested a timeline for the development be part of the MZO, should the municipality pursue one.

“I don’t want to change it, and then nothing gets built, and 20 years from now somebody puts something totally different. There would have to be a timeline,” he said.

The report requested by council at the Dec. 12 meeting will be brought to the Jan. 16 meeting of the committee of the whole.

Ramara resident Judy Mitchell-Wilson worries MZO approval would strip the municipality’s power to determine the outcome of the project.

“They can flip it, or whatever they decide to do, and we have given away the control of what goes on in that property,” she said.

Should the project go through, she worries taxpayers will be stuck with the bill for servicing hundreds of units.

While Mitchell-Wilson is not against development along the Rama Road corridor, where the municipality is pushing for development, but she feels the MZO would remove due process from the equation.

“The taxpayers are the ones that are going to be on the hook for the cost of servicing this whole complex. The Rama Road corridor is not a bad idea, but let’s go through the due process to protect taxpayers rights,” she said.

“It’s really, totally undemocratic and muzzles … the taxpayers. It takes us right out of the equation, and yet we’re the ones who are going to pay. There’s lots of folks in the community who are writing about this to the council because there’s lots of concern.”

She is also worried the project’s proposed 10-storey buildings deviate from the township’s official plan, and wonders whether the seniors’ units would be affordable for anyone local.

“It’s being sold as a retirement complex, but is this really going to help anybody in our neighbourhood?” she asked. “What is it going to cost to live there? It might be totally out of reach for our local seniors. There’s a whole lot of questions that aren’t answered.”