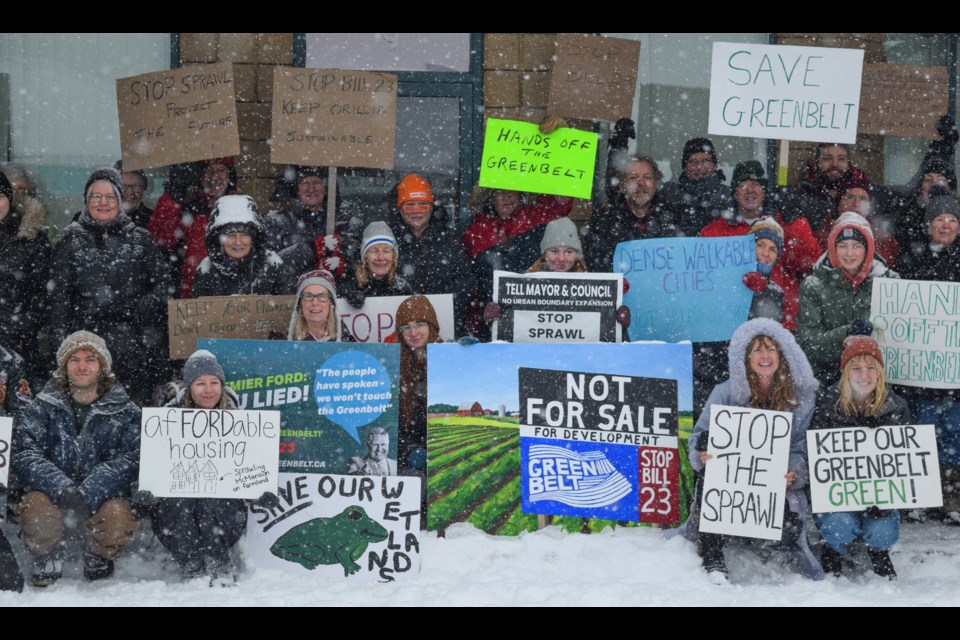 If the proposed bill, also known as the More Homes Built Faster Act, becomes law critical environmental protections will disappear, municipalities will lose revenue and property taxes will increase, say critics. (Read our story about the potential impact of the bill, locally, here.)

“This bill is a crisis!” exclaimed Madeleine Fournier, one of the organizers of the Sunday morning pop-up rally.

Ever since The More Homes Built Faster Act was introduced, it has come under attack across the province from the public, environmental groups, and elected officials, Fournier noted.

“This bill is disgraceful and downright ridiculous! It’s honestly a slap in the face to all of us,” said Jay Fallis, who was recently re-elected as a Ward 3 city councillor.

At Sunday’s rally, Fallis noted that Orillia city councillors are writing a letter to Premier Doug Ford and Dunlop asking the government to scrap Bill 23 due to the damage it would inflict on the area.

Of the people attending the rally Sunday, there were about 20 people under the age of 30, organizers noted.

“This is the generation whose futures will be profoundly impacted by the climate and housing crises, so we have to work to protect them now,” noted Fournier.

“I don’t enjoy (protesting), This is my third one in the last three months here at Jill Dunlop’s office … I don’t enjoy it, but it needs to be done,” Fournier said.

Bob Bowles, an Orillia resident and well-known local naturalist, was also in attendance at the Sunday morning rally. When speaking during the opening remarks, his message was clear: “It’s an attack on us! Doug Ford imposed the bill before doing any research on the topic.”

Bowles noted this bill would negatively impact the entire Greenbelt and destroy precious wetland and wildlife habitats, which need to be saved.

“We’ve passed 8 billion people in the world; we only can sustain 10 billion, so what’s going to happen when we build houses and destroy the Greenbelt? … consequences beyond what we can imagine,” he warned.

A potential side effect of the bill and the creation of many more homes would be the impact on critical services in communities far and wide.

“This bill will reduce the funds needed for other critical services in our community like social services and affordable housing,” said Paige Jakobczak of Couchiching Jubilee House.

Right now, there are 4,400 people on the affordable housing waitlist in Simcoe County and the average person waits three years, according to recent statistics from the Couchiching Jubilee House website.

This bill, if passed, would only increase those numbers and add more strain on the housing sector and other critical services Jakobczak warned.

Today’s protest was just one of dozens happening across Ontario, all in support of scrapping Bill 23.
Read article here