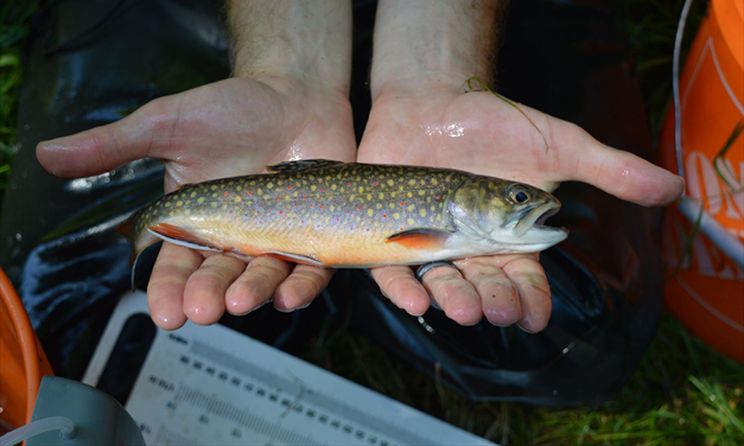 One of the fish that was counted during the Nottawasaga Valley Conservation Authority’s fish population survey conducted Aug. 31 in the Nottawasaga River near Loretto. – NVCA photo

From Simcoe.com, September 6, 2022
By Brad Pritchard

Staff and volunteers with the Nottawasaga Valley Conservation Authority had a special piece of equipment at their disposal while conducting some field work Aug. 31 at two sites along the Nottawasaga River in Adjala while checking up on the local fish population.

The electrofishing equipment, which was borrowed from the Credit Valley Conservation Authority, emits a current into the water and temporarily stuns the fish. This allows crews to capture them in nets so they could be identified, weighed and measured, and then released back into the water.

“In order to do performance monitoring of fish communities, electrofishing is the standard,” said Fred Dobbs, the NVCA’s manager of stewardship services.

He said the electrical current brings the fish out from the roots where they shelter, allowing them to be collected in nets and counted. Without this equipment, he said it would be very difficult to get an accurate assessment of the fish population.

“The electrofishing gives us performance data, not only to see if the sites we are working on are improving, but also to see what the bar is,” he said. “What the fish community looks like in the healthy part of the river, at the Village of Hockley, sort of sets the standard for the situation we are trying to recreate by restoring the river further down stream.”