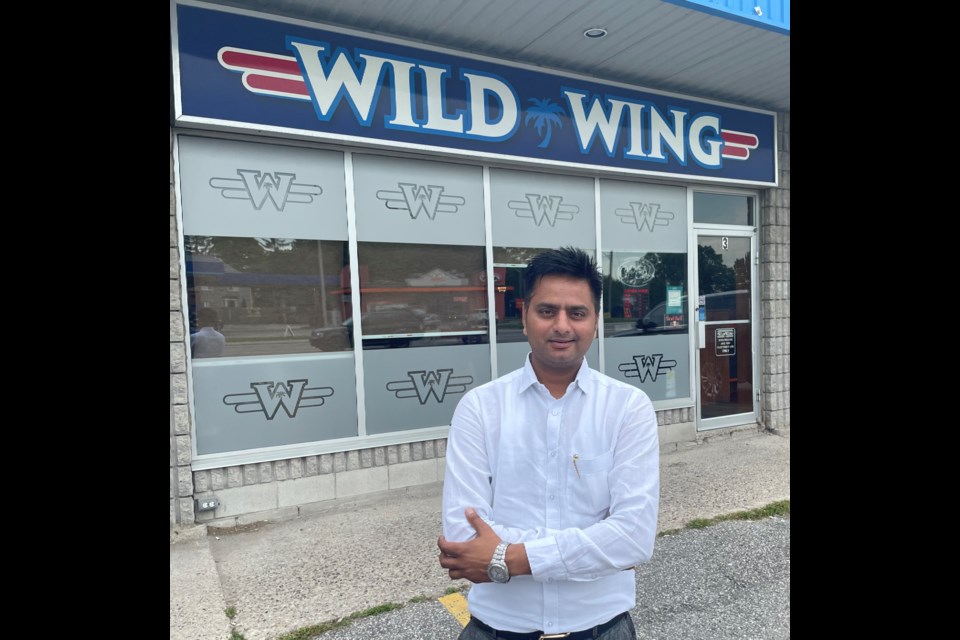 From OrilliaMatters, September 1, 2022
By Greg McGrath-Goudie

A local business owner is hoping to help Orillia’s business community and infrastructure grow if he is elected to a Ward 3 council seat in the Oct. 24 election.

Deval Brahmbhatt, 37, has lived in Orillia since 2012 and owns a number of businesses in Simcoe County. He owned the Orillia Wild Wing location from 2012 to 2020, and he currently owns the franchise’s Midland and Wasaga Beach locations.

On top of that, Brahmbhatt owns Fat Bastard Burrito locations in Orillia and Barrie, and previously worked for Google before becoming a restaurateur.

Originally from India, Brahmbhatt completed a bachelor’s degree in business administration at Gujurat University before moving to Canada as an international student in 2006, going on to complete the international business and marketing management program at Centennial College.

He said serving the community through politics is something he has always wanted to do.

“This is something that was always inside of myself, and being 10 years in business … I decided to go for the step up,” Brahmbhatt told OrilliaMatters.  “I have grown up seeing my father doing more and more charity and a lot of work for the Lions club … so this is something in my nature.”

He views the upcoming term of council as a chance to bring progress to Ward 3.

“It’s a great opportunity to step up because I think there are many areas that need attention and can be a bit better,” he said. “I can do my best on behalf of all the people I’m representing.”

Brahmbhatt hopes to help Orillia’s services and infrastructure keep up with the growth the city has seen in recent years.

“Orillia is growing right now, and you see a lot of investors are coming to Orillia and they want to invest the money, so we can definitely do something better for everybody — for students, for family and for seniors — and we want to look for that,” he said.

He has a five-year-old son, and said expanding daycare opportunities is at the top of his list.

“When you look at the new Orillia, it’s developing with diversity…. You see more restaurants, more grocery stores. At the same time we need (more) daycare over there,” he said. “I would like to invite (investors) to come down to the city … and have daycare facilities because … when I was looking for a daycare, I was on a wait list for one year.”

He also hopes to bring traffic-calming measures to the west Orillia area as it continues to expand and more families move there.

“When you look at the new area, it’s developing so fast. So many more houses are coming, and that means many more people are coming,” he said. “That means it’s going to bring more traffic, more people, but you need a better … traffic system.

“You want to manage that traffic calming somehow. You (could) have a speed bump, put a speedometer up, or put a better way, maybe a roundabout.”

“Right now people want to live (here), but … they can’t afford it and they can’t just move to Orillia,” he said.

He also laid out different priorities for the newer and older sections of Ward 3.

“I’m looking to see something like … a family doctor unit in Ward 3 (in) the new area,” he said. “The old area of Ward 3 … we can do some better maintenance over there so we can develop, and we can probably put new signs; maybe we can do some nice, smooth roads and (some) betterment, infrastructure-wise.”

Other issues Brahmbhatt would like to address include expanding transit services, whether by improving local taxi services or bringing in ridesharing companies like Uber, and working to ensure the city’s safety and security.

In terms of security, Brahmbhatt mentioned he supports programs like the OPP’s SCRAM project with the city, which enlists the help of residents and businesses in video surveillance.

“There (are) security issues, as well, because a lot of students are there and we want everybody to have their free and safe, secure life,” he said. “When they have any issues, they can get the footage … so this is something I’d like to get more of when I work with the city. You want to work with the people (and) work with the businesses.”