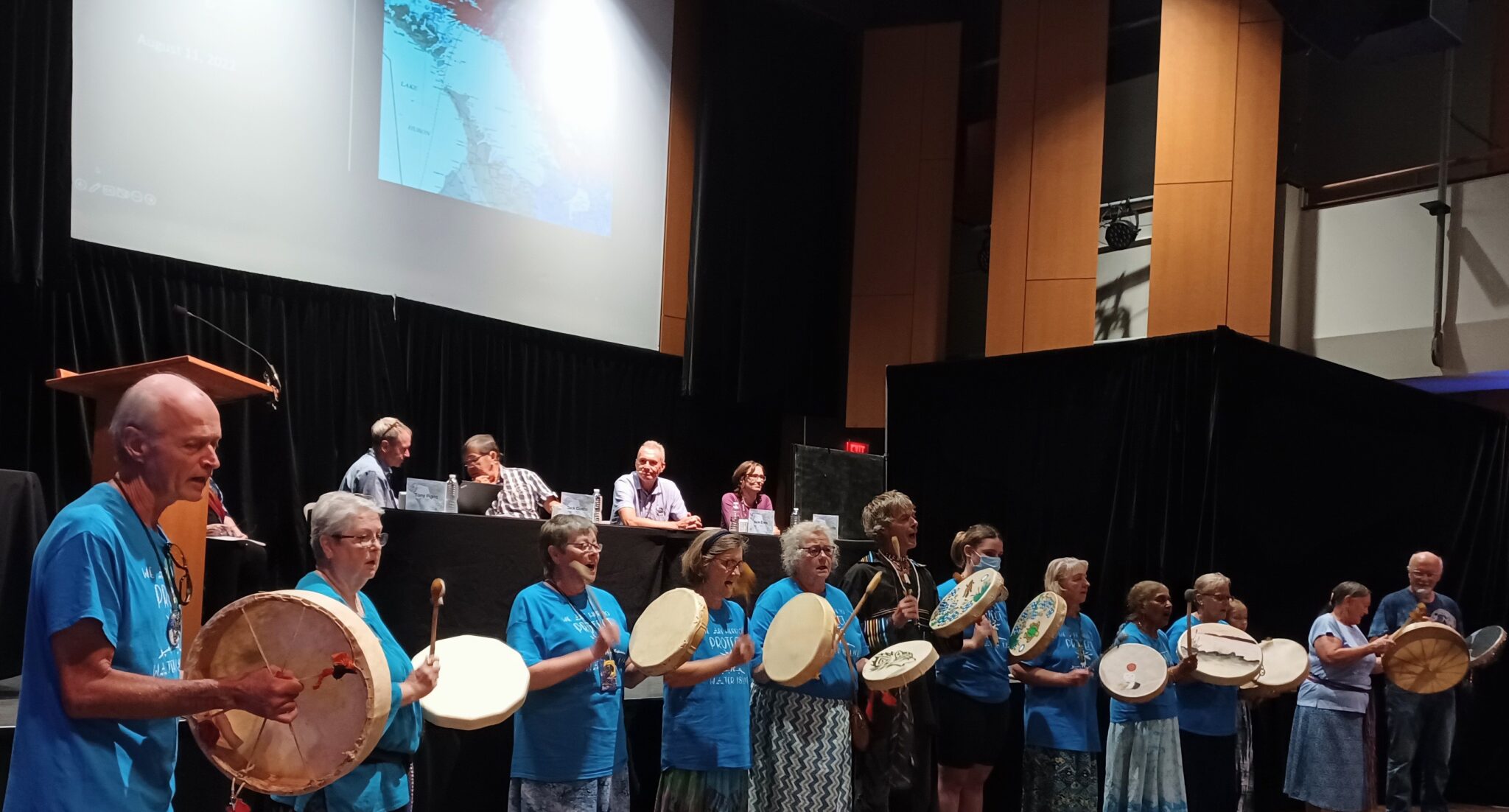 UNESCO designation may be a slam dunk, but controversial developments won’t be affected

Interest was high, with 120 people in attendance as a panel from the Georgian Bay Geopark Network went public with its plan for a UNESCO-backed park at its first town hall meeting, in the Midland Cultural Centre last week.

It’s the unique geology of Georgian Bay that makes it a “slam dunk” prospect for selection by the United Nations Educational, Scientific and Cultural Organization, said Nick Eyles, professor of environmental sciences at the University of Toronto and the author of Georgian Bay: A Unique North American Ecosystem.

Geologists are story-tellers, said Eyles, “and Georgian Bay is one of those places that tells a lot of stories because we have 2.5 billion years of Earth history preserved on our doorstep – so just up there, we have more than half of the Earth’s evolution recorded in a very small place.”

The stories to be told will be based on the principle of Two-Eyed Seeing, which brings the indigenous perspective into balance with western scientific research methods, said panelist Jack Contin, a member of the network’s indigenous leaders’ group and a candidate for the deputy mayoral position in the current municipal election.

“We want to incorporate the Dish With One Spoon,” Contin added, referring to early treaties between indigenous nations that required signatories to take on “a shared responsibility in the protection of Mother Earth.” The dish represents the land, the spoon is how people partake of resources, sustainably.

The potential is high for attracting UNESCO designation that will drive tourism, economic development and education opportunities, said marketing expert Tony Pigott, a former CEO of the advertising company J. Walter Thompson Canada, who was moderating the meeting.

But hopes that the initiative, if successful, might thwart environmentally unfriendly development around the bay, were dashed.

“No UNESCO Geopark, unfortunately, has any interventionist power,” Pigott said when fielding questions about Midland Bay Landing, a 40-acre waterfront property owned by the town for which a developer has recently been selected, and about the TC Energy pumped-storage project proposed for the Niagara Escarpment land near Meaford owned by the federal Department of National Defence.

Activists involved in efforts to protect the pristine Waverley or Simcoe Uplands groundwater, presently threatened by intensified aggregate extraction, took heart from a positive response to a question from AWARE Simcoe’s Sandy Agnew.

“There are several scientists that are wanting to study that water,” Agnew noted. “It’s been tested already to be the purest in the world. Is this an aspect that fits in with the Geopark?”

“Yes, very much so,” replied Eyles, adding that the hydrogeological research that’s to take place at the Waverley Uplands will provide a lot of information that can be used by the public, government and conservation groups. “That’s a really good example right there of the value of the Geopark.”

Local resident Brent Graham, who spearheaded an effort to get UNESCO World Heritage site designation for the Waverley Uplands, noted that this is a protective measure. In fact, to qualify as a World Heritage site there has to be a plan for protection of the feature to be designated.

In contrast, a UNESCO Geopark is a passive designation, Graham suggested. Pigott agreed.

Georgian Bay Métis Council’s Senator Gwen Lindsay gave the opening and closing prayers at the meeting, which started with drumming from members of the Chigamik Hand Drum Circle.

There are 177 Geoparks around the world, five of which are in Canada, namely Discovery in Newfoundland, the Cliffs of Fundy in Nova Scotia, Stonehammer in New Brunswick, Percé in Quebec and Tumbler Ridge in British Columbia. Another seven Canadian sites, including Georgian Bay, are “aspiring” Geoparks.

Data and information to support education and research is already being collected by Kirsten Kennedy, a post-doctoral fellow at the University of Toronto. With backing from research funding organization Mitacs, she is using drone systems for ecological and geological spatial mapping around Georgian Bay.

The Geopark will take the form of over 100 “hubs” around Georgian Bay, to be selected with community input, Pigott said.

He explained: “The model that UNESCO has created is one whereby the technology through the website, provides the tools, the guidelines, the networks, the resources that local communities access in order to really implement and bring alive the Geopark for their particular part of Georgian Bay.”

The park will not have boundaries but instead will be defined by hubs with virtual information that can be accessed at the site or from anywhere in the world through the website georgianbaygeopark.com, unveiled on the day of the meeting last Thursday.

Instead of physical signage on the ground, visitors will use their smart phones as a guide.

One Response to “Geopark plan unveiled”