Home » Issues » Climate Change » COLUMN: Fate of monarch butterfly could be in our hands

COLUMN: Fate of monarch butterfly could be in our hands 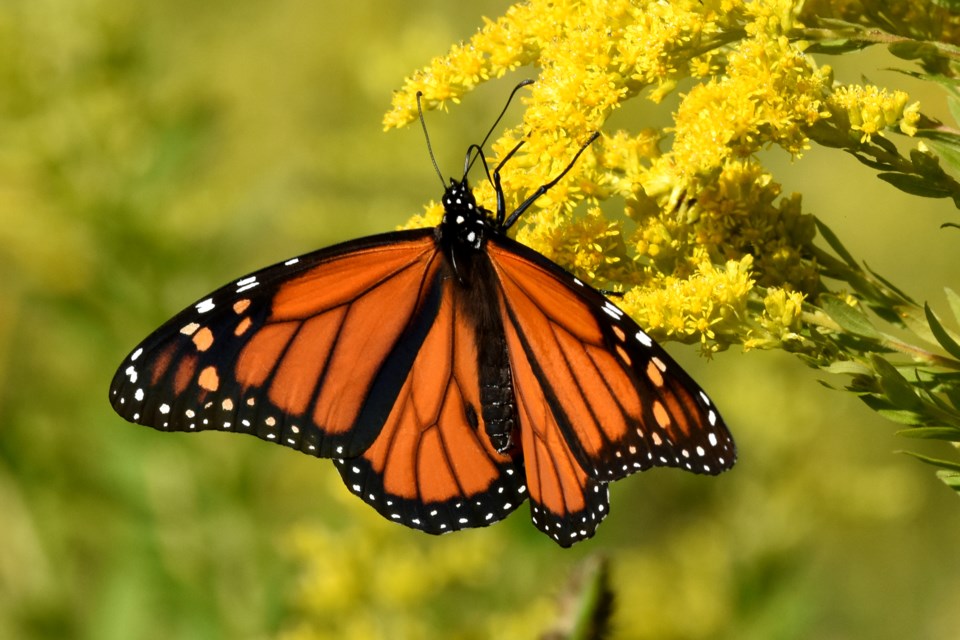 The monarch butterfly is now red-listed as an endangered species. | David Hawke/OrilliaMatters

Can bad news also be good news? How much spin does one need to apply to make a bad news story a good news story? This interpretation of an event is somewhat commonplace in our interactions with nature.

As you may have heard, the monarch butterfly is now red-listed as “endangered” by the International Union for Conservation of Nature (IUNC). That’s the bad news. And it’s the good news.

For any species to be considered to be endangered with extinction is noteworthy, as every species interacts with every other species, somehow, in some way. It’s all about that old web of life theory you learned in science class way back when. Still holds true today, but tends to use updated words like ‘biodiversity’ and ‘interconnectedness’.

So how is giving notice of the imminent death of a species a good thing? That depends on which species the media is presented with. The Tanzania Screeching Frog is also on this red list, as is the Skadar gudgeon (a fish) and the Banded Grand Gecko (a lizard). Do you care? Have you even heard of these animals?

Yet to have our beloved monarch butterfly to be so listed has caught our attention. This is how the public relations folks who work with wildlife conservation groups get your attention, your support and yes, your money. Nothing wrong with that… everything needs money to operate.

Same thing happened in the late 1970s when the chemical DDT was found to be moving through the food chain, causing shell-less eggs to be laid, defects in beaks and the crashing populations of several species of wildlife.

But what if the original message of warning was touting the pending end of a small clam as the representative of the affected natural world. Big yawn. Whatever.

And so the ‘good news’ about having the monarch go from threatened to endangered is that we, collectively, know and recognize this beautiful butterfly; it is part of our childhood memories, it is very pretty and much has been discovered in recent years about its remarkable circular journey around North America.

We care about it. So what the heck is happening to kill it off?

As a representative for a group of species that are fast becoming a minority on this planet, monarchs stand a good chance of getting the attention, research and money needed to create change.

Wood ducks were brought back from the brink of extinction with nesting boxes, as were eastern bluebirds. Whooping cranes were afforded protected areas for breeding and rearing their young. So it is possible, sometimes, to turn things around. Can we do so for the monarch butterfly?

First question is: why is the monarch population crashing? Seems that there are several factors in play, such as habitat loss as well as climate change. From farmland being turned to asphalt and shifts in the weather causing misalignments of natural events, these large Lepidopterians are having a hard go of it.

Most of us know that monarch caterpillars only eat milkweed leaves (common milkweed and swamp milkweed). There is a chemical called cardenolide within the sap of milkweeds that is toxic to a bird’s digestive system. This is stored in the caterpillars abdomen and somehow survives the massive cellular realignment that happens inside a chrysalis. The emerging adult butterfly continues to carry this substance within its abdomen.

The story I learned as a child was that if an animal has bright warning colours to it, it’s nature’s way to tell everything else to “back off.” Apparently when a bird eats a monarch butterfly it gets very, very sick… and swears by all that’s holy it will never, ever indulge in an orange butterfly, ever again!

Therefore predation is not a problem, as only two birds (an oriole and a grosbeak) as well as a mouse species actually eat these orange butterflies. And only in the wintering grounds in Mexico.

If the milkweed plants are disappearing, as they are due to developmental sprawl flowing unchecked into rural areas, perhaps we can assist by providing those missing plants? Many people are indeed planting milkweeds in their gardens to provide a passing monarch a place to lay her eggs.

However, providing this food plant is not enough. Yes, fine, the eggs will be laid and the caterpillars hatch, but in the wild a milkweed plant is surrounded by many other different plants, some of which provide wind shelter or shade, or their flowers will provide the energy-giving nectar to the adult butterflies as they prep for the south migration.

Pollinator gardens are a great first step, but need to be embellished with other essential parts of the ecosystem, including water. In reality a small garden in the middle of a huge city will not be the salvation of this species. But if it makes you feel good then by all means proceed!

So what is our role in bringing back the monarch to a healthy and sustainable population? If we humans are the problem, then perhaps we should also be the solution. While habitat loss can be somewhat mitigated, immediate reversal of climate change may be out of our hands.

Red-listed species are the new “canary in the coal mine.” Time to sit up and pay attention.