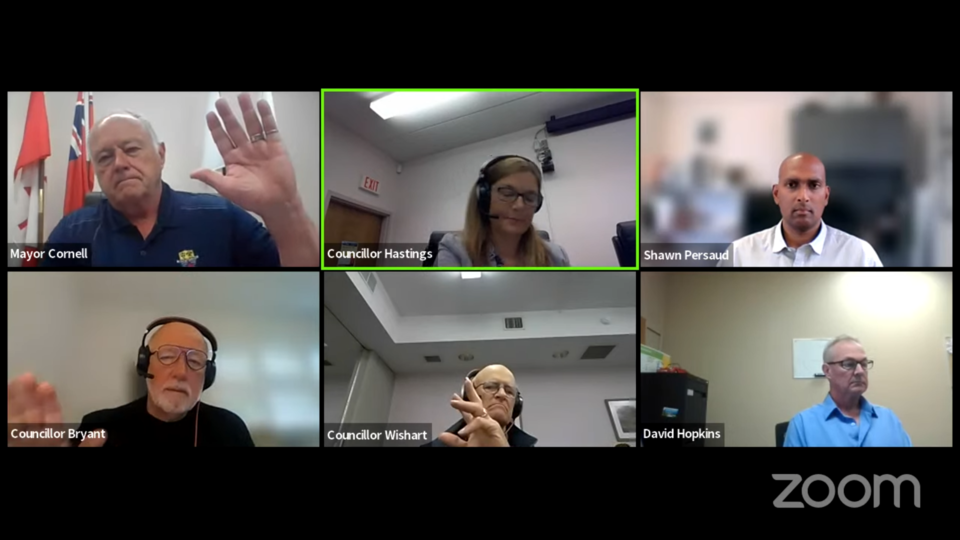 From MidlandToday, July 5, 2022
By Derek Howard

Environmentalists watching wash water aggregates like a hawk in Tiny Township have gained an ally in the municipality, who will also be watching like a hawk.

Approval of a permit to take water (PTTW) and the issuance of an Environmental Compliance Approval (ECA) was granted for Waverley Pit No. 2 recently by the Ministry of Environment Conservation and Parks (MECP), but not before being modified through the township’s comments alongside consultant recommendations, and over 3,400 emails from concerned respondents.

At a recent committee of the whole meeting, Tiny council reacted favourably to the removal of a questionable secondary source pond, a geosynthetic liner to protect the Alliston Aquifer beneath the aggregate wash plant operation, and stringent monitoring to be put in place that will provide as much protection as the township can control.

An update by senior hydrologist Dave Hopkins of R.J. Burnside & Associates Ltd. was provided during the meeting.

“There are two main issues at the Sarjeant pit; there’s a permit to take water, which is for water that is required for the wash pond, and then there’s an ECA required because the ponds associated with the wash plant are considered to be a sewage works. Sarjeant had to apply to the MECP to get those two permits,” said Hopkins, who pointed out they were granted on June 15.

Regarding the ECA application, Pond B was removed as a water source after Burnside noted that it wouldn’t be viable below the proposed pit floor, and which the ministry stated wasn’t included on site plans.

Additional addressed comments included hydroconductivity and an increased thickness of the clay liner, and that Sarjeant prepare a statement licensed by a certified engineering practitioner that the works be constructed in accordance with the ECA approval.

“Another concern was that there was no water-quality sampling proposed. Now, that wasn’t a significant concern because those ponds are going to be lined; essentially, no water will escape those so there will not be any impacts on the underlying aquifers,” said Hopkins, pointing out those comments had also been addressed.

“Basically, the MECP took our recommendations almost word for word from our letter and added them into the ECA.”

A five-year permit to take water (rather than a typical 10-year PTTW) was issued allowing 1,641,600 litres per day to be taken from Pond A up to 180 days per calendar year; as well, a permit condition allowing for double the amount for 15 of those days to fill the wash pond was presumed by Hopkins to likely occur after dredging and removal of suspended materials would require a refill.

“In total, (the Environmental Registry of Ontario) received 3,407 comments via email and they said the majority of those were very similar,” said Hopkins, “primarily related to concerns about impacts to the aquifer and residential wells.”

The MECP noted that 3,373 of the email submissions contained “very similar content,” with a 2005 pristine groundwater study by Shotyk, W., Krachler, M., Chen, B. and Zheng, J. frequently cited.

From the Environmental Registry of Ontario: “The ministry’s review has determined that the pristine aquifers identified in this study are not at risk from this proposed water taking. The water taking proposed is from a surficial and unconfined aquifer, where the aquifers subject to this study are confined, separated from the upper aquifer by an aquitard.”

Hopkins added that the review suggested there would be no impact to domestic wells, based on distance from Pond A which is in the water table while domestic wells are in the deeper aquifer.

Also of note in the permit approval: No additives were used in the washing process, resulting in no impact to groundwater quality; and monitoring of groundwater levels, the manner and frequency will occur through two nearby off-site private wells as well two property wells to be installed west of the licensed area – one in the surface aquifer and one in the deeper aquifer – prior to the taking of water for aggregate washing.

“Data-loggers basically measure differences in pressure, and you can get data as frequently as every second,” said Hopkins. “So they have to collect water level measurements in all those monitoring locations every four hours. That will certainly show up any changes that could occur because of the operations.

“Based on all the responses from the ministry and the conditions of the permit, we’re satisfied that they’ve addressed our initial comments,” he added.

Coun. Cindy Hastings asked if council was “comfortable” with the approvals, noting “perhaps happy is a strong word.”

Coun. John Bryant stated it was the best deal that could be made, while Coun. Gibb Wishart said that while he wasn’t happy, he wouldn’t hold up the process.

“But I’m going to watch like a hawk,” Wishart added.

“Given the discussion here,” Hastings replied, “we have the ability to watch like a hawk.”

In March, Adam Chambers launched a petition seeking federal help to protect the “purest water in the world” in the Alliston Aquifer, which includes the Waverley Pit area.

‘This water is the gold standard for water worldwide, a national and global treasure,’ notes a petition delivered to Ottawa by the Simcoe North MP.

Information on the two approvals and their associated letters from the MECP can be viewed within the agenda page located on the Tiny Township website.

Archives of council meetings are available to view on Tiny Township’s YouTube channel.

One Response to “Waverley Pit gets permit approvals from ministry, Tiny council”