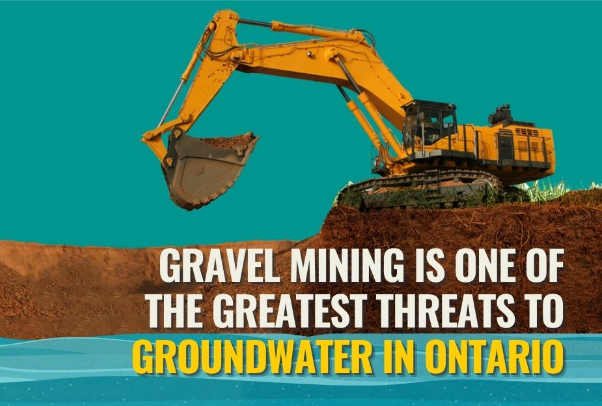 By Mark Calzavara, Water Campaigner, The Council of Canadians

Lying beneath the ground in Tiny Township, Ontario, is an aquifer that contains the purest groundwater ever tested.

Despite heroic efforts to protect it, by our friends and allies in Tiny and the surrounding communities, the Ontario government continues to allow gravel mining corporations to expand and endanger these unique and precious waters in the Simcoe Uplands.

The Ford government should have said NO to the gravel industry, but they didn’t. Now, the community is petitioning the federal government to intervene and protect the area.

Gravel mining operations cut down the trees, strip away the soil, and gouge out the gravel and sand. But these same complex layers of gravel, sand, and soil are thought to be the source of the exceptional purity of the groundwater in Simcoe Uplands, by providing a natural filtration system.

Leading Canadian experts are proposing further studies into how this purity is created and maintained – research that could aid in water purification worldwide but is now directly threatened by gravel mining.

Much of the gravel being stripped out of the Simcoe Uplands is destined for the expansion of Highway 400 nearby. Worst of all, we don’t even need any new or expanded gravel mining operations in Ontario – existing licenses already allow about 15 times more extraction than the province uses each year.

The Simcoe Uplands are within the territory of Beausoleil First Nation of the Ogemawahj Tribal Council and Williams Treaties First Nations. Government and industry are both required by law to seek full prior and informed consent from them before regulatory approvals are granted, but they have not done so.

In 2009, the Council of Canadians worked together with a group of Anishinaabekweg (women from Beausoleil First Nation), the local community, and thousands of supporters like you from across Ontario to successfully stop the construction of Dumpsite 41, a landfill that was being built on the same aquifer just west of the Simcoe Uplands.

Just a few years later, you helped to stop the proposed mega quarry near Shelburne, Ontario, which would have destroyed thousands of hectares of prime farmland as well as the headwaters of several important rivers.

Now, we need your support again.

The gravel industry has long had a free reign in Ontario. The regulations governing quarries and gravel pits are badly skewed in their favour, but when we all pull together, we can make a difference!

For more details about the campaign in the Simcoe Uplands, please click here.

For more information on gravel mining in Ontario, check out the Reform Gravel Mining Coalition.