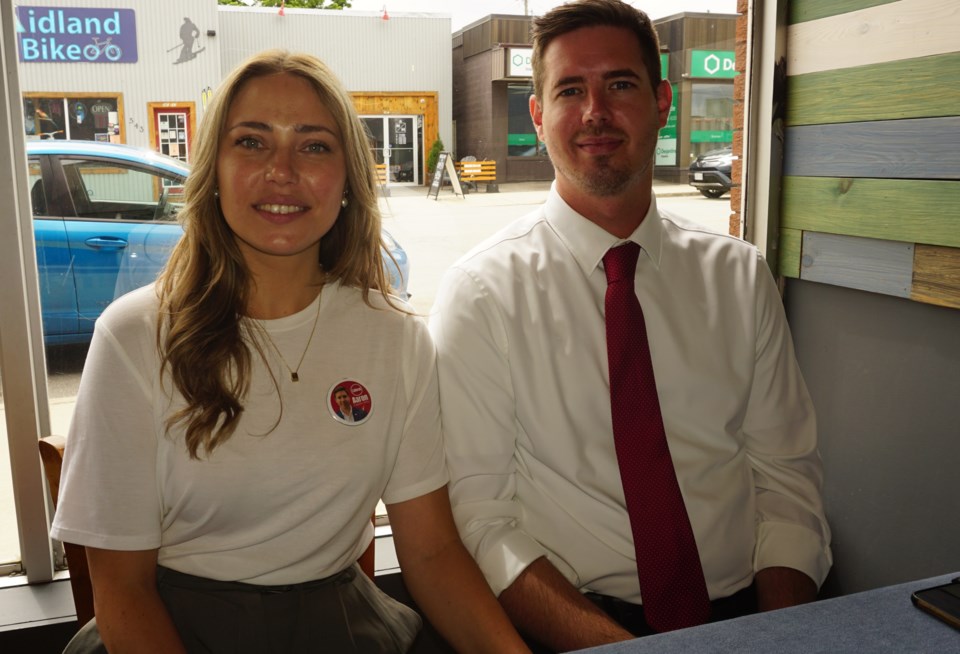 Aaron Cayden Hiltz and his girlfriend, Jasmine Juneau, visited Grounded in Midland during the final day of the campaign. | Andrew Philips/MidlandToday

From OrilliaMatters, June 2, 2022
By Andrew Philips

Aaron Cayden Hiltz is already thinking about the next time.

After an eye-opening experience as a rookie Liberal Party candidate in a traditionally Tory blue riding, Cayden Hiltz says he’s fully hoping to represent the Grits again in 2026 and wrestle the riding away from the Progressive Conservatives.

“My team and I have already come up with a framework,” he says, noting this campaign helped lay a lot of the groundwork for “another run.”

A lifelong Simcoe County resident, Cayden Hiltz says he’s very proud of the campaign he ran during his first foray into provincial politics.

“It’s been awesome,” says Cayden Hiltz, who hoped to bring progressive change to the riding through a blend of lived experience, pragmatic problem solving, and political experience from his time as a university student.

“We worked our butts off. It’s been incredibly rewarding.”

Once the writ was dropped, the 30-year-old candidate prided himself on being on top of the local issues in whatever part of the riding he was touring.

During a Southern Georgian Bay Chamber of Commerce debate, for example, he was the only candidate to bring up the uncertain fate of the SS Keewatin, which is docked in Port McNicoll for the time being, and ongoing overcrowding issues at Burkevale Protestant Separate School in Penetanguishene.

“I tackled a lot of local issues,” he says matter-of-factly. “We were running to win. 2018 was a tough year for the Liberals, but we rebranded ourselves with something that’s palatable and understanding of people.”

Cayden Hiltz ran on a platform that focused on affordability, climate change, health care and education, and what he viewed as the inadequate efforts of the incumbent Progressive Conservatives under the leadership of Premier Doug Ford.

“Obviously, we’re a little disappointed with the PC majority again,” he says. “I thought their policies would damage them a little more. It speaks of the work we need to do.”

Cayden Hiltz says he plans to closely watch how the Tories treat the electorate over the next four years and will pay particular attention to returning Simcoe North MPP Jill Dunlop.

He says Dunlop better improve on representing Simcoe North residents this time around if she hopes to win again.

“I hope that after the campaign she realizes how important accountability is and not be an absentee MPP,” Cayden Hiltz says, noting he’ll be closely monitoring Dunlop’s performance over the next four years.

As well, he said Dunlop disappointed many by her failure to participate in almost all of the region’s all-candidates debates.

“Those forums are a place to gather for people to ask questions and hold accountable those in power,” says Cayden Hiltz, who is close to finishing a degree in pre-law and political science at Orillia’s Lakehead University.

“It’s really indicative of the last four years. She hasn’t been in the riding.”

During his countless hours knocking on doors and meeting constituents, Cayden Hiltz says many residents told him the rookie MPP lacked her father Garfield’s hard work int he constituency when it came to ensuring their voices were heard.

“I heard horror stories all across the riding,” he says, referring to constituents who said they contacted Dunlop’s office about a concern, but never received a response.

He adds: “I hope she re-examines the way she’s been doing things.”

While final results were not tallied, Cayden Hiltz was in third place just 200 votes behind NDP’s Elizabeth Van Houtte.