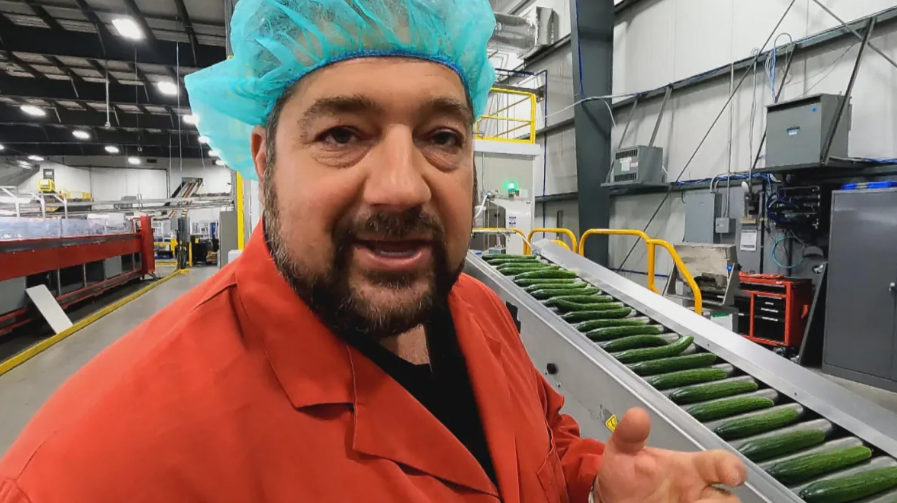 Dino DiLaudo stands beside a conveyor belt stacked with freshly grown cucumbers plucked from leafy, green vines that drape down from the glass ceiling of a nearby greenhouse.

These cucumbers are about to go through a treatment process that will eliminate millions of tonnes of single-use plastic from the supply chain.

“We’ve gone from one of the most complained-about items in the produce aisle to now a completely plastic-free cucumber,” said DiLaudo, vice-president of sales and marketing at Westmoreland Topline Farms.

This week, the Leamington, Ont., grower will be the first in the country to ship English cucumbers that are not individually plastic wrapped to produce sections across Canada.

Instead, they’ll be treated with a plant-based spray developed by Apeel Sciences that is edible, tasteless and extends the natural shelf life of a cucumber.

DiLaudo said the new treatment is sustainable and cost effective.

“The plastic is there to hold the respiration of the cucumber in, basically to lock in its freshness and keep it from oxidizing and spoiling prematurely,” he said.

“We’re removing the plastic and we’re protecting the cucumbers with a natural, plant-based product.”

California-based Apeel Sciences has been working on ways to reduce or eliminate plastic from the produce industry for nearly a decade.

“We became aware of this problem of plastic being used to help retain moisture and maintain freshness on cucumbers,” said Ravi Jolly, Apeel Science’s vice-president of new products.

“We’re providing the consumer with an option, a more sustainable option.”

These plastic-free cucumbers hit shelves the same week the federal government announced new details about its plan to ban some single-use plastics over the next 18 months, including straws, takeout containers, grocery bags and cutlery.

A 2019 Deloitte study found less than one-tenth of the plastic waste Canadians produce is recycled, equating to 3.3 million tonnes of plastic being thrown out annually, almost half of it is plastic packaging.

“Everybody wants to do their share when they’re talking about being [a] good environmental steward,” said DiLaudo.

He said the overuse of plastic in seedless cucumbers has probably been one of the largest concerns in the industry.

Removing plastic from one load of cucumbers is the equivalent of taking 100,000 plastic straws out of the system, he added.

“A lot of the time you can’t avoid plastic,” said Lucy Bain, a co-ordinator who focuses on plastic, noting her personal disdain for individually plastic wrapped bananas found at grocery stores.

She wants a bigger push at the government level to create industry standards that require companies to be less reliant on plastic.

“We need the government to actually put in these standards so that we can be better consumers. It shouldn’t be up to us, in that sense.”

DiLaudo said the cucumbers were the first product to go through this treatment at their operation and they’re looking at ways to reduce plastic on other produce items.

“We have our mini seedless cucumbers, which I think are next on the list of being being an item that could really work well,” he said.

“I think that if there’s no sacrifice to the quality of the cucumber and it’s going to be a good thing for everybody.”

Read the article and watch the videos here