‘Absolutely terrible’: Residents rally to ‘stop the pits, save our water’ 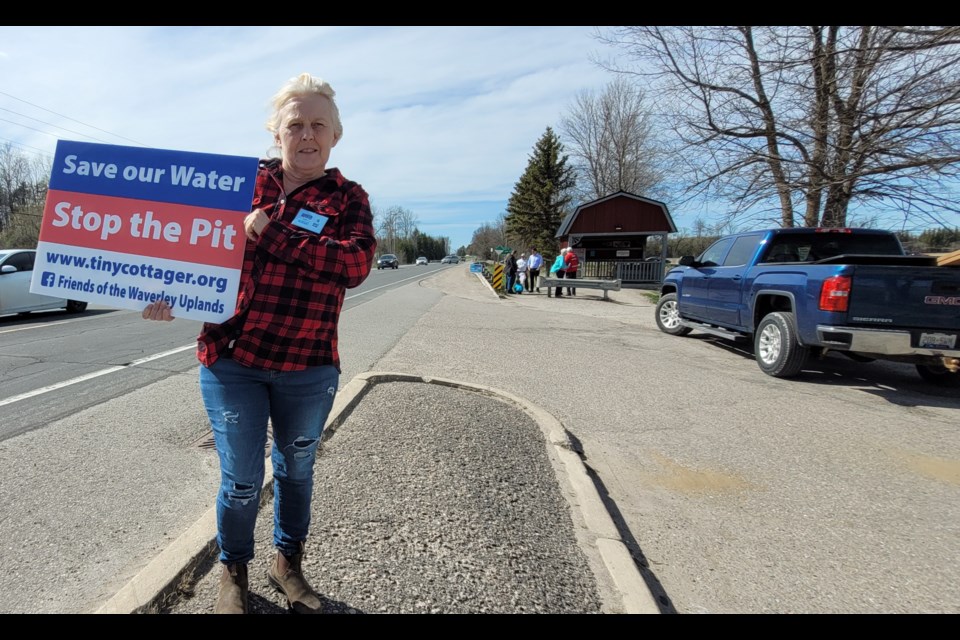 Lynne Gibson shows her concern for the disruption and destruction of the Elmvale Water Kiosk, Friday, May 6.Shawn Gibson/BarrieToday

Ontario Liberal candidates Aaron Cayden Hiltz (Simcoe North) and Jeff Lehman (Barrie-Springwater-Oro-Medonte) met with residents and other concerned citizens at the Elmvale Flow on Friday to discuss what to do about the much-debated area.

About 30 people attended the gathering at the popular water resource at the north end of Elmvale to protest the ongoing attempt to continue expanding open-pit gravel mines and create new ones, threatening the community’s water.

Ann Truyens lives in Oro-Medonte and has been part of the effort to stop the threat to the water kiosk, which contains some of the purest water on the planet, for more than 20 years, dating back to the Site 41 conflict.

“That was when the county wanted to build a landfill on top of a farm property not far from here, which also would contaminate the water. We fought that for over 20 years. The farmers, First Nations and other residents got that stopped and now we have to deal with gravel pits,” said Truyens. “The hill off in the distance has three quarries and they want to expand deeper, past the water table, which would contaminate the flow. They want to destroy the cleanest drinking water in the world for gravel? It’s absolutely terrible.”

Lehman told BarrieToday he admired the continued fight of those directly and indirectly affected by what happens at the kiosk.

“There are seasonal residents in Tiny and residents right here in Elmvale who get their water at the flow. I think the issue above all is how (it is) going to develop in the future,” said Lehman. “There is an existing operation, but, really, the concern is how many more, and in what ways. Are new aggregate pits permitted? A lot of people have that concern about what is going to happen in the future.”

Hiltz told the crowd that when he was 17, his mom would send him to the flow from Orillia to pick up water as part of his farm chores, so the site means a lot to him.

He told BarrieToday it’s not about standing in the way of progress, but rather protecting natural resources that are vital.

“We’re not against gravel mining in general. We’re against it in Tiny Township specifically,” said Cayden Hiltz. “We know we need gravel to build the buildings people are going to work and live in, so we need that for economic development, but we draw the line at pristine environments, and the Alliston aquifer is the gold standard of water in the entire world and shouldn’t be put in jeopardy by a gravel-mining corporation just looking to make a few extra bucks.”