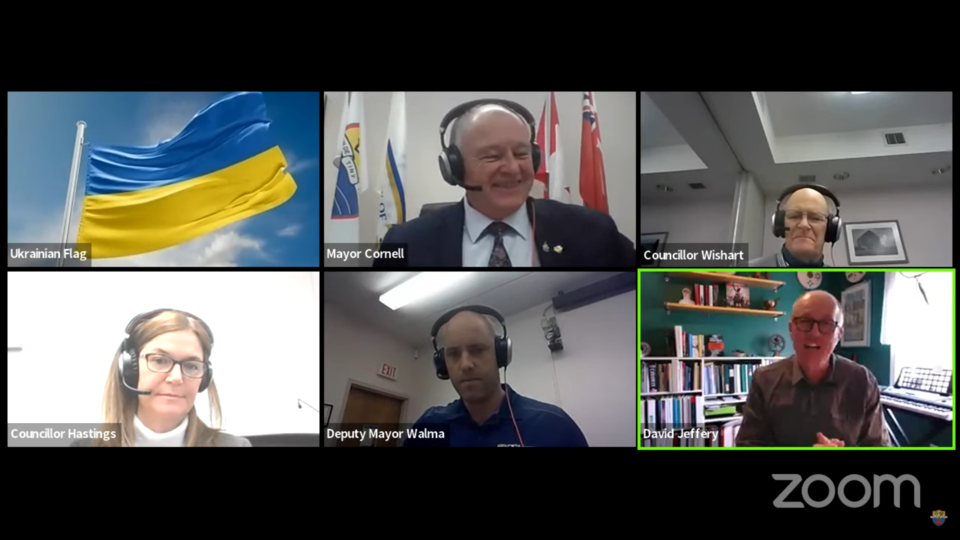 David Jeffery (bottom row, right) provided a deputation on behalf of the Reform Gravel Mining Coalition to Tiny council recently, asking for the municipality to join a provincial-wide moratorium on new and expansion of aggregate permits. | Tiny Township

If aggregate companies seem caught between a rock and a hard place with protesters, then one gravel mining opposition coalition are intent on being that hard place.

A deputation to Tiny council by a concerned gravel mining coalition requested that the municipality support a temporary moratorium on further new and expansion of aggregate permits during a recent committee of the whole meeting.

David Jeffery of the Reform Gravel Mining Coalition (RGMC) spoke during the presentation, offering statistics on the province-wide campaign regarding local gravel mining activities in various parts of Ontario.

Part of Jeffery’s research included a look at the online pits and quarries interactive map provided by the Ontario Ministry of Northern Development, Mines, Natural Resources and Forestry (ONDMNRF).

“For our area, there are five pits south of County Road 27 on the Waverley Uplands, with a combined annual extraction tonnage of 900,000 tonnes, largely sitting idle,” stated Jeffery.

“By the way, this is the industry’s unknown secret: a number of locations sitting idle while new applicants are sought. We have such an example here on French’s Hill.

“North of (CR-27), three new; one active in Teedon Pit, and two applications for a combined total tonnage of 2.6 million tonnes. These are three of the 11 pits in Tiny Township. These three alone have a combined annual tonnage twice that of the other eight pits combined.

“If all 2.6 million tonnes are extracted annually, we will have 200,000 truckloads rumbling through our communities every year. Who will maintain the roads, manage the disruption? What routes will these trucks take? Where is all this gravel going?”Jeffery asked.

Within the deputation, Jeffery provided a short video titled “It’s about DAMN! Time” (an acronym of Demand A Moratorium Now) by RGMC co-chair Graham Flint. Flint cited nearly 5,600 gravel sites in Ontario, while pointing out a connection between gravel mining and climate change.

“We actually have a policy in Ontario that says: there’s no need to show a need for establishing a new gravel mine,” stated Flint in the video. “So the industry has permission to dig up on an annual basis 13 times what we actually use. That’s a policy of a bygone era when we thought the planet was just something we could take and take and take, and not be respectful of it at all.

“But the reality is that an awful lot of sites sit dormant, and that’s the horrible secret of this industry. The dormant gravel mines tell us that we’ve got more gravel mines in Ontario than we need. They’re a clear indication that the industry is out of control; successive governments have failed us,” Flint charged.

Jeffery further cited the limited options municipalities have in protecting residents from negative impacts, referring to gravel pits in Wellington County that were assessed too low by MPAC last year, owing millions of dollars in backdated property taxes.

Prior to Jeffery’s deputation in the committee of the whole meeting, Tiny council agreed to stay patient in adopting a wait-and-see approach to the taxation of aggregate operations, with the intent being to watch what comes of an appeal process underway in Wellington County.

The request in the deputation was for Tiny council to support a moratorium on further new and expansion of existing gravel and aggregate mining permits, until a better process for approvals and oversight of the industry could be put in place.

Coun. Cindy Hastings asked Jeffery about the duration of a moratorium, which he replied would require between 18 months to three years to compile recommendations on the industry.

“(Mayor George Cornell) and I actually had a sit-down with (ONDMNRF), I guess this would’ve been last term,” Walma shared, “and they’re under-resourced even from their site inspections; they don’t have the ability to get out and visit all the sites in the inspection schedule that they’re supposed to. It’s definitely an issue that we need to keep abreast with.”

Coun. Gibb Wishart noted that crafting a unique moratorium for Tiny was important in presenting impact and not being a bulk response which could be ignored.

The RGMC deputation was one of several similar presentations to councils across the province since the group officially launched in early January.

Council accepted the deputation as information to be added to the agenda for the next committee of the whole meeting.

The Reform Gravel Mining Coalition documentation and representative moratorium example  from the Township of Halton Hills can be viewed within the agenda page located on the Tiny Township website.

Archives of council meetings are available to view on Tiny township’s YouTube channel.