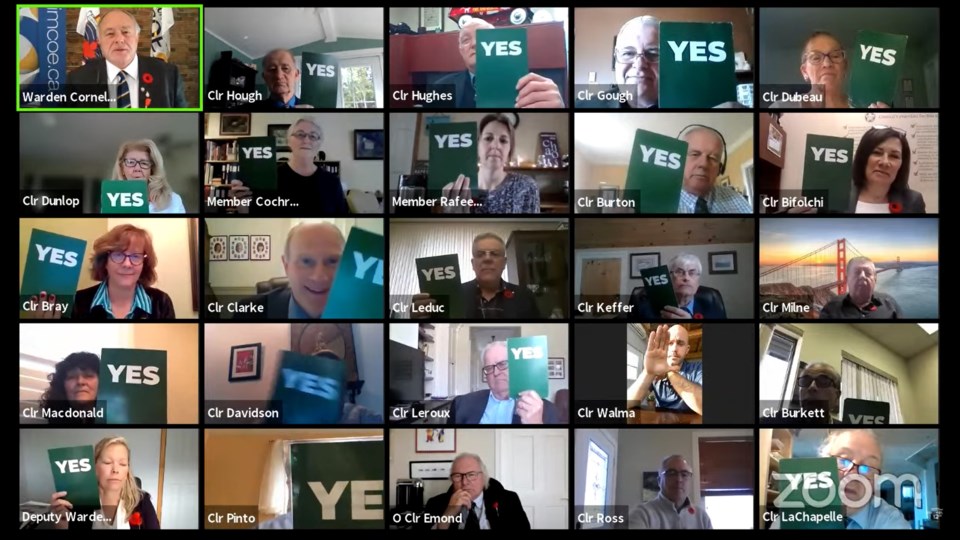 County of Simcoe councillors voted in favour of the 2022 draft budget as part of their committee of the whole meeting on Nov. 9, 2021. | Screenshot

From OrilliaMatters, January 23, 2022
By Jessica Owen

Unless you’re available at 9 a.m. on Tuesday mornings, you may have been out of luck when it came to viewing County of Simcoe council and committee of the whole meetings.

However, that could change moving forward.

Currently, County of Simcoe council and committee meetings are livestreamed on the county’s YouTube channel, however video is not available following the meeting.

According to a report presented during recent governance committee meeting by county clerk John Daly, the county is considering changing their approach to allow the meeting videos to be archived on the county’s YouTube channel.

However, there are concerns that the practice may put the county at risk of non-compliance with the Accessibility of Ontarians with Disability Act (AODA).

“Whether it’s compliant or not – we are more compliant and more accessible if we do have it available,” said Springwater Deputy Mayor Jennifer Coughlin during the meeting. “We have many parks in all of our communities that aren’t fully accessible, but we don’t take them down.”

“The restrictions that are being placed on this make it less accessible to everyone,” she said.

According to the staff report, in 2017, the county’s governance committee requested staff to report on available options to broadcast council and committee of the whole meetings, however at that time they found tools and software were not reliable or affordable enough to make broadcasting fully accessible under the AODA.

“However in 2020 with the extensive use of Zoom and the quality of the broadcast, closed captions have improved,” noted Daly in his report. “Although auto-closed captioning has improved, broadcasts are not archived…due to non-compliance with AODA, that being the provision of described video.”

“In short, live broadcasts do not require captions, and archived videos do require captions with descriptive text to be fully compliant with AODA legislation,” he wrote.

Coughlin pointed out that multiple lower-tier municipalities across Simcoe County archive their meetings, and as far as she knows, Springwater Township has never received a complaint about not having closed captioning on archived meetings.

Daly said in his years of experience, he’s never received a request for described video.

“It doesn’t mean that it won’t happen,” he said.

As part of the report, county staff is also recommending archiving videos for 30 days, at which time they would be removed. Coughlin raised concerns about this approach.

“My concern with the 30 days is, if there are residents particularly interested in an issue, the video could be gone before they even become aware of it,” she said, while proposing videos instead be archived for at least a year.

“Even for myself, there have been times when votes have happened during meetings and I think, ‘What happened there?’ and I would have loved the opportunity to go back and view it myself and continue to learn,” she said. “I’m a strong advocate for this.”

“The more transparent we can be, the better,” said Ross.

In addition to council and committee of the whole meetings, other committees and task force meetings through the County of Simcoe are also being considered for archiving.

Oro-Medonte Township Mayor Harry Hughes raised concerns with archiving, based on experiences he’s had at his local council.

“The general public, when they are part of these committee meetings, I’m not so sure they’d all be comfortable having their face available on archive,” said Hughes, adding he’d be supportive of only archiving council and committee of the whole meetings, and only for 30 days after a meeting.

The governance committee voted in favour of receiving the report and moving forward with archiving of council and committee of the whole meetings for a year after they are streamed. The recommendation would have to be ratified at a future county council meeting before going into effect. The next meeting of County of Simcoe council is scheduled for Feb. 8.