Environmentalists get municipal backing for battle against Bradford Bypass 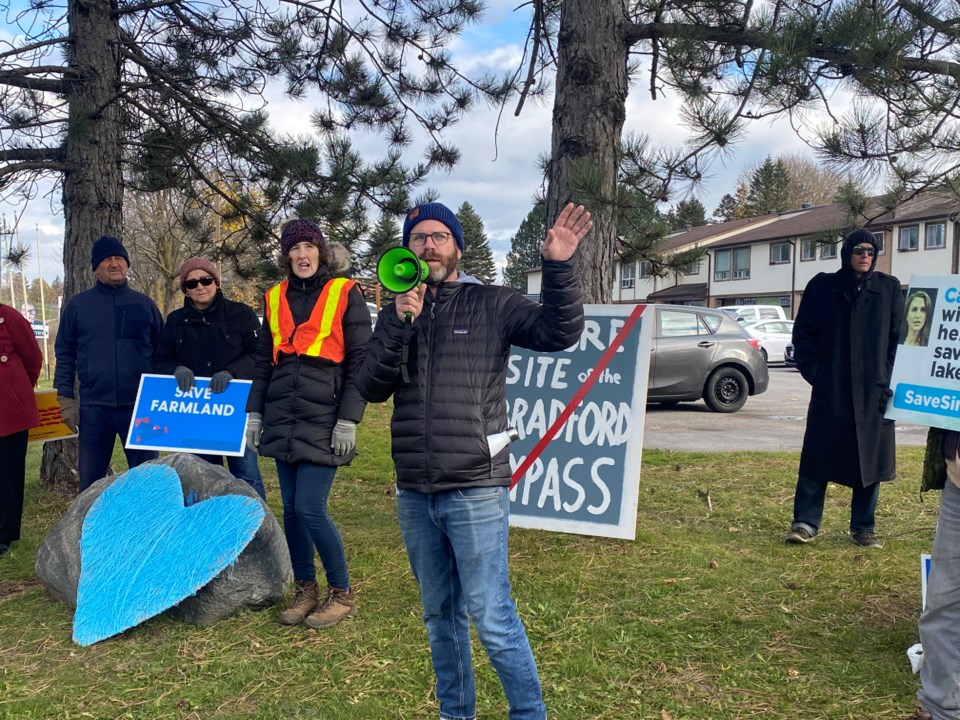 A protest against the Bradford Bypass protest is shown in a file photo.Natasha Philpott/BradfordToday

From BarrieToday, December 18, 2021
By Joseph Quigley

Rescue Lake Simcoe Coalition executive director Claire Malcolmson says she’s happy about the headway her organization has made in the fight against the Bradford Bypass.

The group has helped push nine municipal councils toward resolutions asking for further environmental scrutiny of the project, whether provincial or federal. That includes Newmarket, which passed a resolution Dec. 13, and Barrie, which has called for a more comprehensive impact assessment on Lake Simcoe.

But Malcolmson says there is still more of a fight to come, believing the province intends to build the new highway “come hell or high water.”

“I really wish that (the bypass) had not become a political issue,” she said. “They’re campaigning on the issue. … I cannot predict the future, but it looks like they will do everything possible to build this despite what municipalities think.”

Environmental groups have expressed concern about the Bradford Bypass, which will connect Highway 400 and Highway 404, from Bradford West Gwillimbury to East Gwillimbury. The project, which has been in the works for decades, is meant to ease congestion and help accommodate growth, with an environmental assessment process dating back to 1997.

The aging assessment has garnered concern, with the province exempting the project from the current Environmental Assessment Act Oct. 7, citing duplication.

At issue is its route through woodlots and wetlands, which has garnered opposition from dozens of environmental organizations concerned by the impact on the Lake Simcoe watershed.

The Ministry of Transportation says the province is moving forward to build the bypass, but it is “not taking any shortcuts” on environmental protection.

“We are taking it a step further by undertaking a project-specific assessment of environmental impacts to ensure we mitigate any impacts,” senior issues advisor Jacob Ginger said. “This assessment includes agriculture, air quality, archaeology, cultural and built heritage, contamination and waste management, and noise and vibration and other studies to be completed.”

But environmentalists are unconvinced. The province announced a request for proposal Nov. 26 for a bridge on Simcoe County Road 4 as a step toward construction. The province has also said an assessment of environmental impacts would be complete by December 2022.

“We believe that funds would best be spent on developing a network of mass transit alternatives throughout the Golden Horseshoe area which would result in less congestion on the roads,” Drawdown Newmarket-Aurora members said. “Planning must be done now for a future that includes a major reduction in greenhouse gas emissions from vehicles. Building more highways will not accomplish this.”

The situation has prompted environmentalists to ask the federal government step in, and get municipal backing to their request for a federal impact assessment. Then minister of Environment and Climate Change Jonathan Wilkinson wrote May 3 that such an assessment is not needed, but Malcolmson said they hope that attitude could change with a newly elected government.

“They made it very clear that climate change and dealing with climate change is one of the issues they were going to carry forward should they win this election,” she said.

He said the federal ministry is content the processes in place for the project are sufficient. But he said transportation is an issue within York Region, and there needs to be a solution to address traffic growth.

“I’d like to see us expanding transit systems,” he said. “The growth problem, it’s not going to go away, so we need to find environmentally sensitive ways to respond to that.”

Malcolmson said her coalition will keep fighting the project. She said she is hopeful the federal government will step in but does not have much faith in the province.

“We’re working with individuals that care, and we are doing absolutely everything we can to raise awareness about this issue. We don’t have lobbyists,” she said. “This is democracy live, and real and in action.”