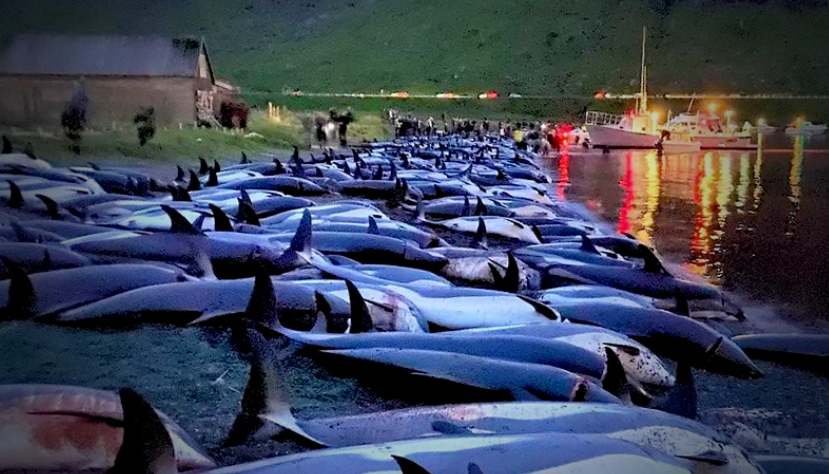 The sea turned blood red as 1,400 dolphins, including pregnant mothers and calves, were slaughtered in the Faroe Islands. It was the largest hunt in history — but days later they were back to butcher another 53 pilot whales. This has to stop! After huge public outrage, the Prime Minister will review the hunt’s regulations, and if we create an urgent global outcry, we could push him to radically reform this brutal hunt! Add your voice before the government decides and sign the petition now.

Locals call it the ‘Grind’ — a cruel annual hunt where hundreds of dolphins are trapped in a cove, and butchered.

But this year was different.

1,400 dolphins were driven onto the beach and slaughtered one by one. Terrified dolphins thrashed around as pregnant mothers and calves were killed. Hunters struggled to kill them all, so many suffocated on the sand. Days later another 53 pilot whales were killed.

Dolphins are one of the earth’s most intelligent species. They have memories and call themselves by name. They understand joy… and grief. Imagine the terror they faced in that bloody cove.

These brutal hunts must end.

Almost half the island’s citizens are against the dolphin grind, and after huge public outrage, the Prime Minister will review the hunt’s regulations. This is our chance. Let’s send a deafening global call to radically reform or end the dolphin grind. Add your voice to take a stand — before the government decides:

This isn’t culture. It’s cruelty. While Faroese people have killed whales and dolphins for centuries, it was much never at this scale, and in recent years ‘only’ 200 dolphins were hunted on average. This year’s slaughter was at least six times bigger — and today the Faroese are one of the world’s richest populations: they don’t need the slaughter for food.

Cultures evolve as the world changes. And in the world we live in today, our cultures have to adapt to a planet that is being devastated — because without a living planet, our cultures would mean nothing. There’s simply no reason for any cultural practices that inflict such suffering and death — let alone on one of earth’s most intelligent, self-aware, and social beings. The same must be said for factory farming, which our movement also campaigns against.

We have to stop this cruel hunt — and right now we have a real chance to speak out. As the Prime Minister reviews regulations, let’s make sure he’s hearing millions of people calling on him to radically reform or entirely ban the hunt. Take a stand and pass this on.