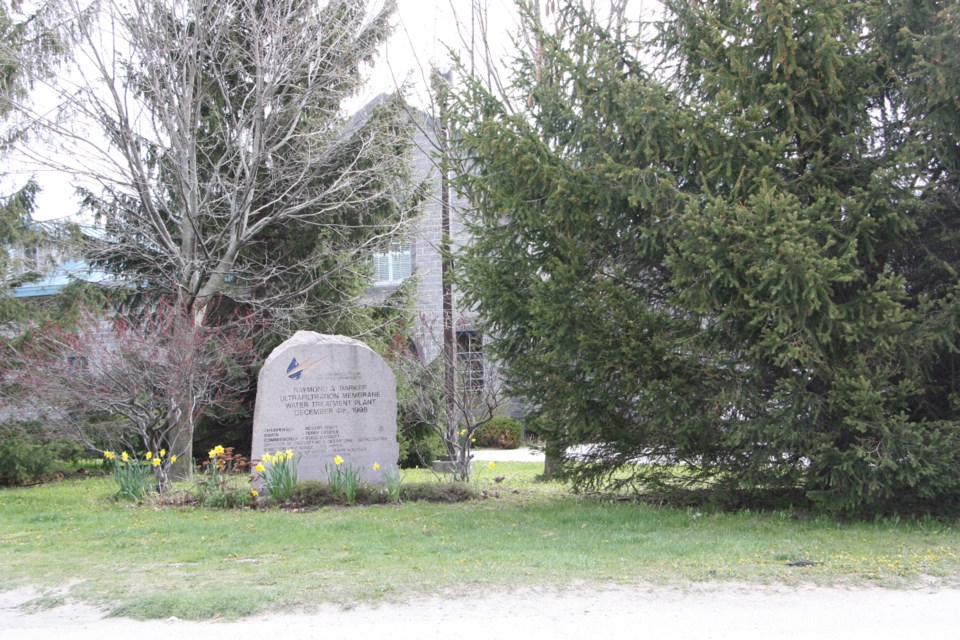 The Collingwood water treatment plant is located at Sunset Point.

From OrilliaMatters, October 7, 2021
By Jessica Owen

‘We have been pushed too hard by top-down planning that has set arbitrary targets,’ said Collingwood resident Ulli Rath during County of Simcoe’s municipal comprehensive review public information session on Tuesday

About 100 people showed up to participate in the first of many public information sessions for the County of Simcoe’s first-ever municipal comprehensive review on Tuesday afternoon.

While preliminary numbers for each municipality have now been released as part of the growth and land-use-planning part of the review, some more outspoken attendees questioned those numbers.

“One of the difficulties of doing planning in Simcoe (County) is it’s very large, very diverse and there are a lot of plans for development,” said Stefan Krzeczunowicz, a planner with Hemson Consulting. “The county has received more than 80 requests to expand settlement area boundaries to accommodate new development. That represents about 6,500 new hectares of new settlement area.”

“Much of the growth pressure is in the southern part of the county, while much of the vacant land is actually north of Barrie,” he said.

Krezeczunowicz said the pressure in the south can’t be satisfied by developing in the north. As such, Hemson determined that for the purposes of the MCR, the county will be treated as two regions – north and south.

The review is a planning exercise where the County of Simcoe will meet with all upper and lower-tier municipalities that are subject to Growth Plan for the Greater Golden Horseshoe. As Official Plans must conform to the provincial policy, the growth plan requires that certain elements of that have to come through a municipal comprehensive review.

While the province has provided the overall growth targets to the county, the county will now be charged with distributing and allocating those targets in specific areas.

Preliminary information provided by the province to the County of Simcoe identifies five primary settlement areas that are poised to handle most of the local growth that will come by 2051: Alliston, Bradford West Gwillimbury, Alcona, Collingwood and Penetanguishene/Midland. Barrie and Orillia are also identified as primary settlement areas, however they are undertaking their own MCR process separate from the County of Simcoe.

Between now and 2051, the Province of Ontario is estimating that Simcoe County’s population (excluding Barrie and Orillia), will balloon from about 357,000 currently to 555,000 total people.

With the influx of new residents, the province is estimating 198,000 jobs will exist here, up from 117,000 currently.

According to the first draft of the proposed Land Needs Assessment, Collingwood’s population currently sits at 26,050. By 2051, the population is expected to reach 43,230.

Collingwood resident Ulli Rath asked the consultants why Collingwood is expected to take so much of the growth, considering the challenges the town is currently is facing in regards to its water supply.

On April 26, Town of Collingwood council passed an interim control bylaw, which put a moratorium on new development for one year while the town addresses water capacity issues. The moratorium was in response to dwindling capacity at the town’s water treatment plant. Though there is still room in the plant’s output for new homes and/or businesses, there’s not enough room to meet the growth expected between now and 2025.

“We’re in the middle of a development freeze,” said Rath. “We have no reliable basis for forecasting what our plan is because the new water (treatment) plant won’t be online for four more years.”

“We have been pushed too hard by top-down planning that has set arbitrary targets without any recourse to understanding old and aging infrastructure. Developers… don’t care what’s underneath the surface,” he said.

Rath asked why growth planning isn’t started with an evaluation of existing infrastructure.

“We’re not Alliston with a Toyota plant. We are not a Barrie, which is now a suburb of Toronto, or an Orillia. Yet, you are insisting on making us one in the north,” he said. “I am urging you to reconsider hitting us with numbers that are twice our population.”

“You are asking this town to manage more of a burden we cannot afford,” he said.

Krezeczunowicz said he disagreed with the assertion that Collingwood isn’t a suitable place to accommodate growth moving forward.

“It is, and it’s a very mature urban community with a lot of potential, but I entirely agree that it is important in considering the feasibility… that we look at the capacity of infrastructure and whether the town can afford it or not,” said Krezeczunowicz, adding that the growth plan requires municipalities to make sure their infrastructure and financial plans are aligned.

“Certainly there is an issue in Collingwood that needs to be taken into account, but we are planning for 30 years and not three, so this is a relatively short-term issue with the current freeze,” he said.

Rath retorted that the water capacity issue in Collingwood didn’t crop up overnight.

“This was an accumulation of imposing unnecessarily fast growth standards on a small community. We’re not just a dumping ground for a population that is too big for Toronto,” said Rath.

Questions posed by the public during Tuesday’s first sessions regarding growth covered concerns about infrastructure, climate change, and transit.

“The water issue is not about timing,” said Malcolmson. “Climate change is a major factor… it’s making our water quality worse. The assumption that is being made that our receiving bodies of water are going to be able to handle more sewage in 20 years is completely insane.”

“You have to consider servicing immediately,” she said.

“I do not believe that anything in this kind of long-term planning should be status quo,” said Marrs-Bruce.

The deadline for feedback on the municipal comprehensive review is Nov. 12. More public information sessions are slated for Oct. 18 and 19.

For more information on how you can get involved and provide feedback, click here.