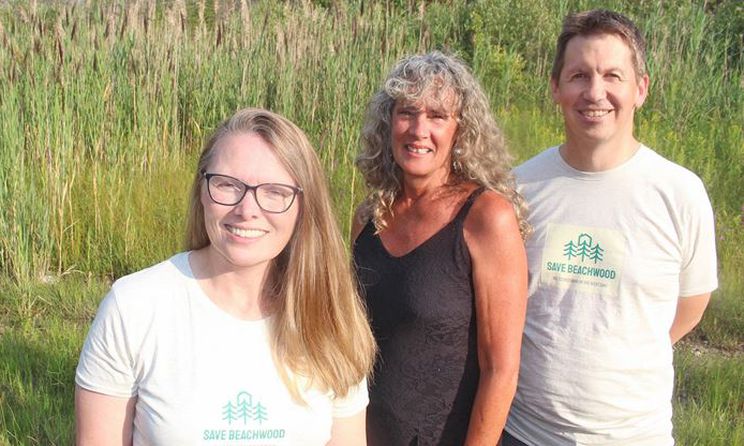 Kerrie Atkins (left), Jan Penic and Alex Schwertner are members of Save Beachwood, a group of Shore Lane residents calling on Wasaga Beach town council not to consider a high-density residential development in their neighbourhood. – Ian Adams/Metroland

A group of residents battling a residential development is heartened by the position taken on the project by the regional conservation authority.

The residents, who have coalesced into the group Save Beachwood (savebeachwood.ca), say Wasaga Beach council should heed the position of the Nottawasaga Valley Conservation Authority (NVCA) that identifies the majority of the 5.88-hectare site as coastal wetland.

Beachwood Developments has proposed to build 33 single-detached homes, 48 townhouses and 134 units in two six-storey buildings in an area between Shore Lane and Beachwood Road.

Save Beachwood launched a petition in June opposing the project. As of Aug. 10, it had garnered more than 1,700 signatures.

A public meeting on the proposal to rezone the property and redesignate it under the town’s official plan to permit high-density residential development will be held virtually on Aug. 19 at 9:30 a.m.

Council is not expected to make a decision on the project at that meeting.

The group is also concerned that some infilling may have already taken place. In 2017, the NVCA opened an investigation into “potential” unauthorized development.

In an email to Simcoe.com, the conservation authority’s communications manager, Maria Leung, confirmed the investigation remains open. She could not confirm what enforcement actions have been taken.

“While we cannot comment on any open investigation files, standard practice is for the NVCA to attempt to obtain voluntary compliance on the part of the property owner,” she wrote. “Only after all voluntary compliance options have been exhausted does NVCA consider additional enforcement tools.”

Under the Conservation Authorities Act, convictions can carry a fine of up to $10,000, or imprisonment of up to three months. Leung said the conservation authority “may also seek court-ordered restoration upon successful conviction.”

According to a document from the NVCA to the town, provided to Simcoe.com by Save Beachwood, the NVCA’s manager of planning called the existence of the wetland a “constraint to development” under the Provincial Policy Statement.

“It is the opinion of NVCA staff that outright removal of all coastal wetland communities from the subject property would clearly represent a negative impact to the viability of such,” wrote Lee Bull.

Save Beachwood member Alex Schwertner maintains the residential density west of 71st Street should stay low-density. Otherwise, he said, the town needs to undertake an overall official plan review of the area rather than plan it out in a piecemeal fashion.

“If the town feels this (low-density development) is no longer appropriate, they should start conducting that study for (west of 71st),” he said.

“It doesn’t make sense for any municipality to approve some high-density development before doing a background study to understand … water, sewage, stormwater management, the traffic management, all the studies that need to be done for the west end,” he said.

See the first article in this story: ‘The development will destroy everything’: Wasaga residents fear impact of high-density housing project