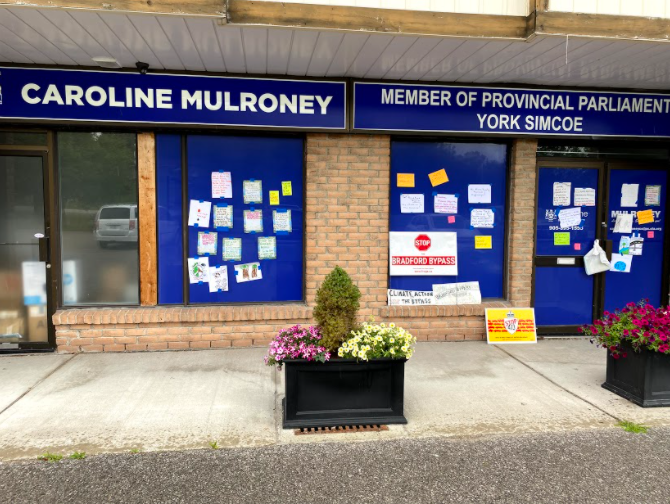 Concerned citizens from across Simcoe County and York Region gathered to show their increasing opposition to the Bradford Bypass.  Roughly 50 people gathered, some came from as far as 2 hours, to demonstrate outside of MPP Caroline Mulroney’s constituency office in Holland Landing.

The gathering was organized as just one event of many in the Day of Action Against Highways across the GTA to stop plans to build the Bradford Bypass and Highway 413.

Bill Foster, one of the attendees and founders of F.R.O.G.S said, “We’re here because our concerns aren’t being listened to at all.  We’ve attended the meetings, written to our MPPs, listened to provincial presentations and in the end, the province has done nothing to show they are serious about protecting Lake Simcoe, the Greenbelt or take climate change seriously.  The province knows the opposition to this highway is growing quickly. There is still time to do the right thing – complete a full, updated environmental assessment that considers impacts to Lake Simcoe, climate change and alternatives.”

Attendees were frustrated by the lack of information about this highway and how there doesn’t seem to be intentions to fully inform the public about the highway and its impacts. 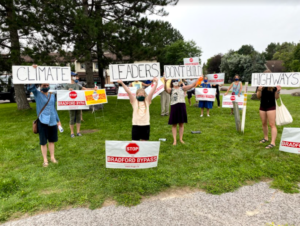 Margaret Prophet, Executive Director of the Simcoe County Greenbelt Coalition, questioned why basic information is so hard to get.

“They aren’t telling the public important information – how this could be a toll road, how the groundwater and surface water will be contaminated, how the traffic studies they did showed that traffic on the 400 and 404 would be worse with the Bypass than without, and that they expect this highway to get so choked with traffic that it will likely need to be expanded to 6 lanes and more interchanges.  Highways don’t reduce traffic congestion – this is a fact. Why are we spending so much to not fix the problem? Why can’t we look at alternatives that work?”

The Rescue Lake Simcoe Coalition’s Executive Director Claire Malcolmson says the downsides and the unknowns are not being talked about. 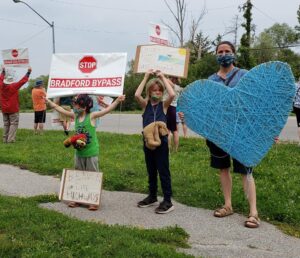 “The studies that they have done have never looked specifically at the impacts to Lake Simcoe. That’s why Barrie and Brock Councils passed resolutions to ask for “a comprehensive impact assessment on Lake Simcoe and those vulnerable watersheds and inflows into Lake Simcoe and identify considerations for alternative routes”. The government of Ontario is committed to a highway that will contribute to the decline of Lake Simcoe and they aren’t willing to do what is required to protect the Lake’s health. Instead, they are speeding towards construction without adequate information.”

About F.R.O.G.S: FROGS is an association of East Gwillimbury residents that came together in 1993 to fight the Ontario Ministry of Transportation’s (MTO) proposed new Bradford Bypass controlled access highway. The government’s apparent zeal to resurrect this highway on an expedited basis, combined with the apparent lack of awareness of this highway amongst most of our neighbours, has caused us to reconstitute FROGS. Our objective is to add our voice to the many environmental groups in southern Ontario who are fighting this unnecessary, obsolete highway in the hope that eventually reason will prevail and this highway will once again be stopped. http://www.frogs.ca

About: The Rescue Lake Simcoe Coalition is a lake-wide member-based organization that provides leadership and inspires people to take action to protect Lake Simcoe. http://www.rescuelakesimcoe.org

One Response to “Protest Against Bradford Bypass Draws Large Support”