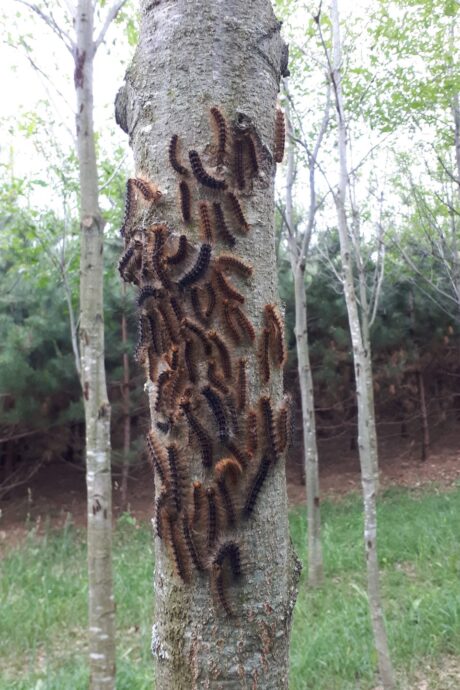 From OrilliaMatters, August 11, 2021
By Nikki Cole

‘I know our township has just been overcome with it … if it did happen in your area you know how devastating it is,’ said Severn Township deputy mayor

From burlap and duct tape to simple soap and water or even a small hand torch, Simcoe County residents are desperate to find ways to rid their properties of the creepy, crawly LDD (Lymantria dispar dispar) moth caterpillars that seemed to descend en masse in many parts of the region this year.

The infestation has caused significant damage to trees and properties in various areas of the county, and Simcoe County Council is desperate to find a solution. That’s why Springwater Mayor Don Allen put forward a motion at Tuesday’s meeting asking staff to review the extent of the infestation in Simcoe County as well as to estimate the scope of the issue in the future, including potential long-term effects to trees.

Allen’s motion also requested staff to investigate potential costs involved in dealing with this problem effectively leading into 2022 for considerations during the 2022 budget process.

Severn Township Deputy Mayor Jane Dunlop supported the motion, and said she had personally spent over $1,000 removing two trees on her own property that were impacted by the LDD moth caterpillar; she said she may need to remove additional trees.

“I know our township has just been overcome with it. I know (in) some areas it didn’t happen, but if it did happen in your area you know how devastating it is, and I worry about the county forests, too,” she said.

Adjala-Tosorontio Mayor Floyd Pinto pointed to a City of Toronto report dated Feb. 18, 2020, which he explained addressed how the city dealt with the issue as well as the costs involved and asked staff if they could include that information when they bring the report back to county council.

“That may help give us a better understanding of how to go about it,” he said.

Adjala-Tosorontio Deputy Mayor Bob Meadows was not as quick to support the motion, stating he would like to see some scientific findings as to how various techniques – including spraying trees – may impact species other than the LDD moth caterpillars.

“I know it’s been a bad situation for everybody, but it’s an infestation that happens and has a lifespan. We have had some unusual weather, and if we’d had a wet spring we wouldn’t have this problem,” he said.

“(Spraying) just doesn’t target (LDD) moths, so I’d like to know if we do go with a spraying, what other ramifications does this have against wildlife and other species?”

The issue with attempting to predict the impact of the LDD moth caterpillars for 2022, noted Rob Elliott, the county’s general manager of engineering/planning and environment, is that not all of the information needed to do so is available yet.

“It would be dependent on the weather in the coming months. The amount of rain (we get) will have an impact on next year, so forecasting it is going to be somewhat problematic but (we) will bring forward a report with some options, considerations and impacts,” said Elliott.