Be The Change films are shown at the Collingwood Brewery

The Be the Change Film Series (BTC), https://bethechangefilmseries.com put on by the Blue Mountain Watershed Trust and presented by RE/MAX Four Seasons Realty, has struck a chord. “I loved the outdoor venue,” comments Scott Miller, whose company Conscious Water sponsors the series. “Being outside really speaks to the spirit of the series.”

The Blue Mountain Watershed Trust, the area’s leading environmental charity, runs the film series as a friend- and fund-raising effort. Now in its 13th year, BTC is showing biweekly at 8:30pm every second Tuesday through the rest of the summer outdoors at The Collingwood Brewery, 10 Sanford Fleming Drive. Attendees must dress for the weather, bring a chair or a blanket and observe 2-metre social distancing between groups. 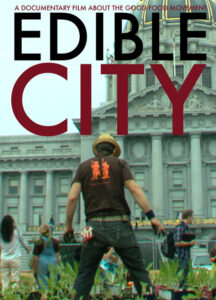 The next film screening, at 8:30pm on August 17, is Edible City. The film, sponsored by local business Juice PLUS+, is a fun, fast-paced, feature-length documentary journey through the local Good Food movement. Inspirational, down-to-earth and a little bit quirky, Edible City captures the spirit of a movement that’s making real change and doing something truly revolutionary: growing the model for a healthy, sustainable local food system that’s socially just, environmentally sound, and economically resilient.

The Collingwood Brewery is easily accessible via the Collingwood Trails. Attendees are, however, reminded to bring a chair or a blanket for seating on the grass.

An incredible line-up of family-friendly films

This year’s film line-up is stellar, with something for everyone. BTC is a family-friendly event, at $12 for adults, $7 for students and children are free. Edible City, is followed 2 weeks later by The Radicals, which tracks a group of B.C. snowboarders and surfers as they learn the meaning of ‘radicalism’ from indigenous groups across the province. Find the full lineup of films and tickets at https://bethechangefilmseries.com.

BTC seeks sponsorship from organizations that espouse socially and environmentally progressive values, such as the Series’ title sponsor, RE/MAX Four Seasons Realty. While the BTC series has many longstanding sponsors, several have left the flock. BTC is pleased to announce the very recent addition of Canopy Media and The Collingwood Foundry as new Premiere Sponsors. Sponsorship starts at $100. Interested businesses are encouraged to get in touch.

About the Be the Change Film Series

The BTC Film Series was created in 2008 to educate and inspire the local Collingwood/Blue Mountains community into action. The Blue Mountain Watershed Trust Foundation is working together along with other community partners to provide the audience with a deeper and more comprehensive understanding of some of the most important ecological and social justice issues facing our local area and the communities of planet Earth. For more information, please contact Carl Michener carlmichener@watershedtrust.ca 416-476-7484.