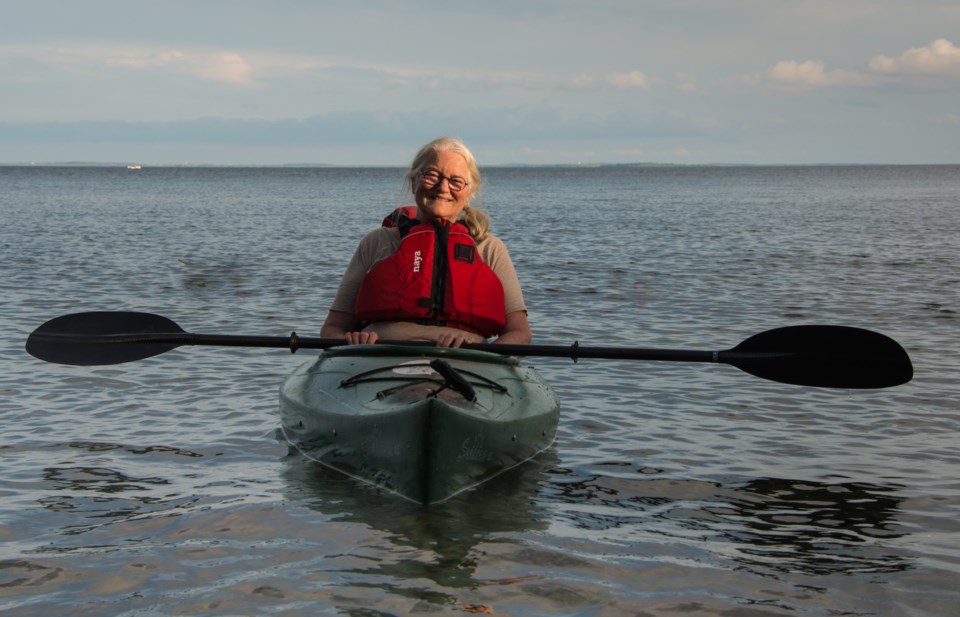 Linda Wells, whose ‘generosity has no limits,’ has offered to match donations to Rescue Lake Simcoe Coalition up to $5,000 this summer

NEWS RELEASE
RESCUE LAKE SIMCOE COALITION
*************************
Linda Wells’ connections to Lake Simcoe are many: she is a swimmer, a community organizer, a birder, a naturalist, and a lover of farmers’ markets and outdoor meals. She is also dubbed the “secret weapon” for the countless, selfless ways she has supported the Rescue Lake Simcoe Coalition’s campaigns since 2005.

Until the end of this summer, Linda has offered to match charitable donations to the Rescue Lake Simcoe Coalition up to $5,000. This generous offer is significant for the small charity.

“Our goal is to raise just another $25,000 this year to pay our three part-time staff,” says the Coalition’s President Moe Sandford. “Linda’s offer will nearly get us halfway there.”

What started as an envelope-stuffing volunteer role at Environmental Defence (working on Campaign Lake Simcoe to get the Lake Simcoe Protection Act) turned into both a close friendship and deeper commitments from both Linda and now Executive Director Claire Malcolmson to helping the lake.

“What I learned from Linda is that we strengthen our resolve to make the world a better place by strengthening the social ties that bind us together,” says Malcolmson.

“Linda’s generosity has no limits. She would plan, prepare and host all food-related parts of our public meetings, but she also brought my family delicious meals when we were starving and bleary-eyed with our first child,” said Malcolmson.

“And then she took my boys on outings years later, freeing me up to participate in all-day meetings that would have been impossible with kids running around my ankles. She brought me professional clothes when my nice clothes were buried in a storage unit. We wouldn’t be where we are without Linda, that’s for sure.”

Linda’s quirky professional background as a toy store owner explains something of her “ready for anything” attitude. This entrepreneurial experience has helped her drive important initiatives for the Coalition, like auctioning a Charles Pachter print donated by her friend, the artist, for $1,200.

As an instrumental member of the Coalition’s volunteer fundraising team, Linda developed the Water Protector Art poster sale initiative and the seasonal holiday card offer from last Christmas that earned the Coalition nearly $3,000.

Linda spent decades with her family cottaging in Georgina, where she became an active member and donor to the successful North Gwillimbury Forest Alliance, and member of the South Lake Simcoe Naturalists Club. In 2018 she moved to the Barillia Park area of Oro-Medonte where she led her neighbours in re-wilding their shared shoreline park property.

Following on the heels of the three-year campaign to Protect Our Plan (the Lake Simcoe Protection Plan), the Rescue Lake Simcoe Coalition is focused on land use planning across the watershed until July 2022. Watershed area municipalities are expected to complete the process of accommodating nearly 50 per cent MORE population by 2051 in land use patterns that could harm water quality, following provincial orders and deadlines in “A Place to Grow” 2020.

The Coalition is extremely grateful to Linda and all her efforts to help us save the lake.

Those wanting to learn more about the Rescue Lake Simcoe Coalition and to make a charitable donation, please visit https://rescuelakesimcoe.org/donate

The Rescue Lake Simcoe Coalition is a lake-wide member-based organization, representing 27 groups in the Lake Simcoe watershed, that provides leadership and inspires people to take action to protect Lake Simcoe.