Is Durham/York garbage incinerator a blueprint for Simcoe County? 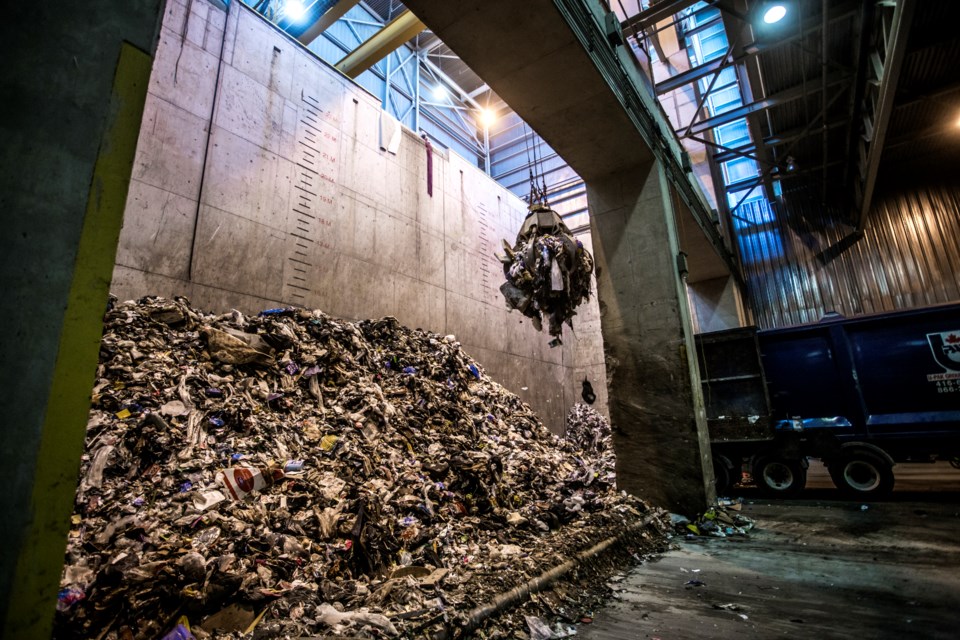 The Durham-York Energy Centre opened in Courtice, Ont. in 2015, opening to further commercial operations in 2016. The energy-from-waste facility converts garbage into energy to be sold back to the provincial grid.

From Orillia Matters May 30 2021
By Jessica Owen

With landfills nearly full, the county has to figure out what to do with its trash – neighbouring regions that faced the same challenge are now turning garbage into energy

Time is a terrible thing to waste – just ask the experts at the Durham-York Energy Centre.

During a County of Simcoe council meeting in April, councillors were informed that the last three landfills in Simcoe County – in Collingwood, Nottawasaga and Oro-Medonte – would be full and closed by 2024, 2025 and 2030 respectively.

Looking ahead, the current long-term plan according to county officials is to pay to export the trash outside of the county’s borders indefinitely.

Questions were raised by councillors concerning what would happen if the exporters decided to stop accepting Simcoe County’s trash down the road.

At the April council meeting, the Simcoe County Director of Solid Waste Management, Rob McCullough, said landfill space across Ontario is filling up fast, and he foresees a major problem once sites province-wide close and exporting to other countries may become the new solution.

The current waste management challenges facing Simcoe County are the same ones that plagued neighbours to the south of Simcoe County 20 years ago.

It is one of only three approved operational energy-from-waste facilities in Ontario, the other two being Emerald Energy From Waste Inc. in Brampton and Northland Power/Kirkland Lake Power Corp. in Kirkland Lake.

The idea was first sparked back in 1999, when Durham Region began work on a long-term waste management plan.

“There was a suggestion within that plan that we investigate energy-from-waste,” said Gio Anello, director of waste management for Durham Region. “At that time, we were transporting our garbage to Michigan. There was an impending closure of the borders, and also we were looking to close our last landfill here in Durham.”

“We were looking for a sustainable disposal option for us,” he said.

Anello says Durham Region council had made significant decisions back in 1999 that there would be no new landfills in Durham, and any waste solutions that came forward, needed to be local ones.

“They recognized it was our problem, and we shouldn’t be imposing our issues on other municipalities,” he said.

With the impending closure of the Michigan border on the horizon (it officially closed to waste transport in 2008/09) and diminishing landfill space across Ontario, regional staff started investigating the option of thermal treatment of waste.

Although, the decision wasn’t without opposition.

“It’s not easy. Even though you have the majority of the population in favour of moving forward with energy-from-waste, you will have a minority opposition that is quite vocal and quite organized,” said Anello.

Anello estimates more than 100 public meetings took place between 1999 and 2015 to provide room for the public to give feedback at every step along the process.

“You’re always going to have people who are never going to support this,” he said. “It required a lot of transparency with the public.”

Anello said it also required some education on the part of the provincial government. As he said this would be one of the first energy-from-waste facilities built in about 25 years, very detailed plans were required to get everyone on-board before permitting could be granted.

The potential partnership between Durham and York regions was first floated in about 2005.

“Both regions were looking for a secure disposal option,” said Anello. “The bigger the energy-from-waste facility you build, the more economical it becomes. We wanted a larger facility that could handle both our regions’ waste.”

Meanwhile, York Region was also using landfills as their primary waste solution back in the early 2000s, although a focus on diversion was always present.

York Region had an existing 100,000-tonne contract with Dongara Developments in Vaughan, a company that converted garbage into fuel pellets.

“We had this while we were working with Durham on planning… for the co-owned energy-from-waste facility,” said Laura McDowell, director of environmental promotion and protection with York Region.

According to media reports, Dongara closed its doors in 2014.

“(Dongara) was a bit ahead of its time, I think,” said McDowell.

McDowell says Durham and York have a long-standing partnership that lent itself well to a joint venture when it came to waste management. She points to the Duffin Creek Water Pollution Control Plant in Pickering, which is also co-owned by the two regions.

“We already had a really strong partnership, and I think it just extended beyond wastewater into waste management,” she said. “We certainly wanted to get out of Michigan to reduce the trucking costs.”

McDowell says York Region’s philosophy when it comes to solid waste management differs from Durham, in that they prefer to diversify methods.

“From our experience, what has helped us really be successful is having a diverse portfolio of options,” said McDowell. “In these facilities they need to temporarily do maintenance and sometimes they need to shut down for a week or two. You need to have options because the waste doesn’t stop coming.”

How does it work?

When garbage enters the energy-from-waste facility, it is dumped in a large pit.

“We operate under negative pressure; that means that we’re sucking air into the building and therefore, there are no odours,” said Anello.

Once the garbage enters the pit, Anello says it is “fluffed up” with a crane, and is then fed into a boiler.

“The boiler has a double wall and between the walls, there is water. As the garbage burns within the boiler – natural gas is used to start it and then energy released from the garbage as it burns continues the process – and as it burns it heats up the water… to more than 1,000 degrees Celsius. It turns the water into steam,” said Anello.

“That high-pressure steam is then put through a turbine generator and that creates electricity,” he said.

The electricity is then used to power the entire plant, with the leftovers sold to the provincial grid.

Two kinds of ash are left once the garbage is burned: fly ash, which is considered hazardous is treated on-site by mixing it with concrete to create gravel, while bottom ash, which is not hazardous, is sent to a landfill to be used as a cover.

Anello estimates the centre generates $8 million in revenue annually for the regions through energy sales.

Metals are also recovered at the centre and sold for scrap. Anello estimates the centre recovers about $500,000 annually from the scrap metal.

When comparing landfill options to energy-from-waste options, Anello said energy-from-waste has a higher upfront capital cost, however as the years go by, it becomes more cost-efficient from an operating perspective.

“Over the 25-year life of this facility…it comes out to about the same cost,” said Anello.

Broken down further, Anello says it costs about $120 per tonne to process waste at the Durham-York Energy Centre. The revenue from the energy brings in about $60 per tonne back.

Comparatively, to send garbage to landfill, Anello estimates it costs $80 per tonne.

“Over the long-term, you’re getting financial benefits and stability. Right now in Ontario, the price of landfilling is going up because the capacity is diminishing,” he said.

Push it to the limit

Anello concedes there are some limitations to an energy-from-waste solution. For example, the incinerator can’t handle items like drywall or hazardous waste, so alternatives are still needed for those items.

“You have to have a really good program up-front for diversion. You’ll always need that,” he said. “Your biggest challenges are the emissions… and getting clean emissions.”

From a greenhouse gas perspective, Anello says an energy-from-waste solution can cut emissions in half over a landfill option.

“From a climate-change perspective, it has benefits. From a diversion perspective, you have the ability to get your metals off the back end. By creating electricity from your garbage, you’re offsetting the need to burn other fuels,” he said.

McDowell says energy-from-waste facilities are prominent across the world, specifically in the U.K., however landfills will always have a role to fill.

“They’re difficult to site, but they’re necessary because you can’t send everything to energy-from-waste,” she said. “However, you really want to exhaust all those other options before you go to landfill.”

“We have growing communities. The province sets our growth targets. Municipalities need to ensure they can put the infrastructure in to support the population within our communities. Part of that is being able to manage the waste,” she said.

What can other municipalities learn?

When it comes to other municipalities considering an energy-from-waste option in the future, Anello says diversion is key.

“Make sure you’re doing as much diversion as you can. That’s the best solution: reduce, reuse, recycle. We all understand there will still be garbage left at the end,” he said. “You have to look at the financials because everyone’s always concerned about if it’s the best financial way forward.

“Once you’ve made a decision, you have to make sure you have the support of your council not over just one term, but several terms because this takes a long time,” said Anello. “If you’re going to do this, start now because it will take years.”

“It was the best solution for us. It’s not one-size-fits-all,” he added.

McDowell was reluctant to provide advice as what works for one municipality may not work for another.

“It really depends on those local circumstances, and the council and their priorities,” said McDowell.

The County of Simcoe declined an interview request for this story, instead sending a written statement.

“In early 2022, the county anticipates holding a broader discussion at county council regarding solid waste management. This future meeting will serve as an opportunity for media to collect comments from councillors and/or information from staff, should this topic be discussed,” wrote General Manager of Engineering, Planning and Environment Rob Elliott.

“The County of Simcoe is committed to diversion and innovative waste management strategies which support the environment.”