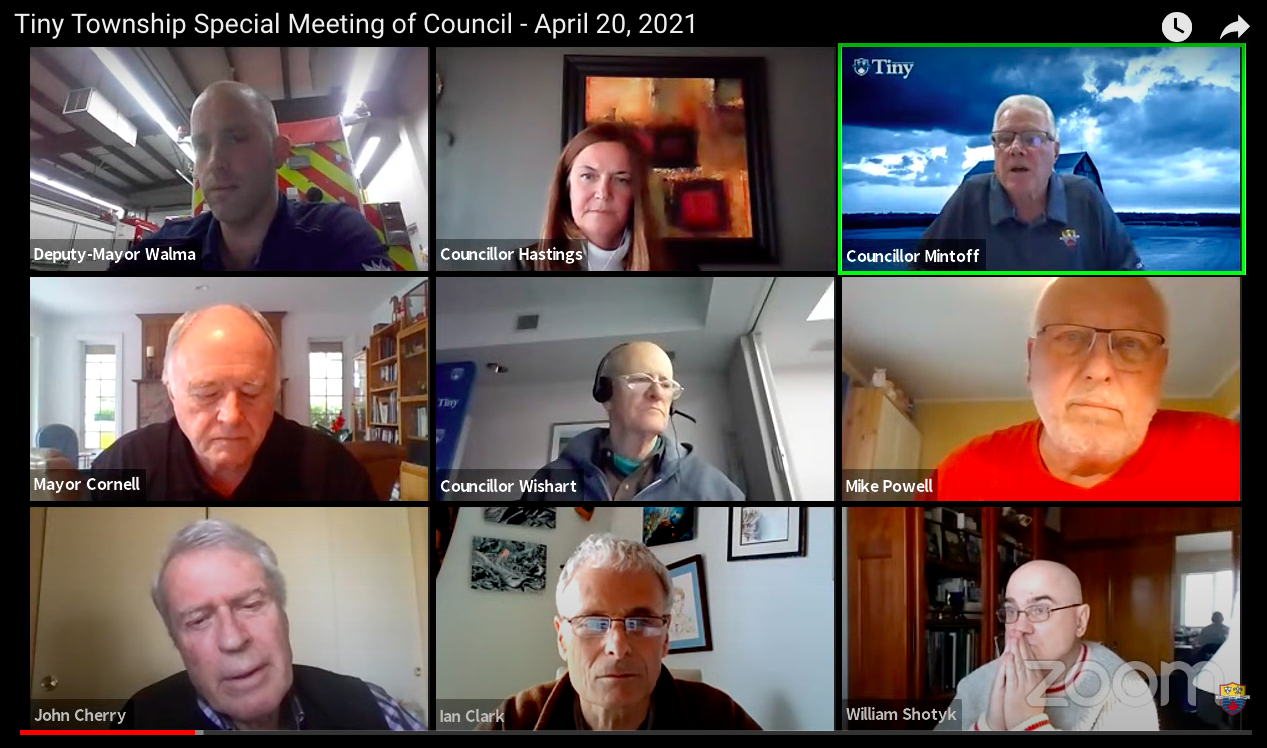 ‘There are no shades of grey on this. This is a matter of right versus wrong’

Two of Canada’s leading hydrogeologists appeared before Tiny Township Council last week to sound the alarm about the threat to the uniquely pristine groundwaters of North Simcoe – waters so clean and rare that to lose them would be a crime against future generations, council was told.

The scientists, members of a team preparing to study the phenomenon, are now in a race against time as contamination has been found in the water thought to be recharged in the Waverley Uplands area, the location of intensifying aggregate extraction.

“The current operation on French’s Hill should be viewed as inexcusable,” John Cherry, Distinguished Professor Emeritus at the University of Waterloo and an internationally recognized groundwater expert, said, appearing virtually at the April 20, 2021 meeting.

“But there is an even more important category of recharge area – this is for recharge areas for aquifers that contain pristine groundwater, because clean groundwater is so rare that it should be preserved above all for the use of current and future generations,” Cherry said

“To expand such operations would be a crime against future generations, against our grandchildren and beyond. There are no shades of grey on this. This is a matter of right versus wrong.”

Joining Cherry was Ian Clark, professor of environmental sciences at the University of Ottawa, who has been studying the “remarkable” waters of the Waverley area for several years.

He noted that there are two categories of groundwater in the area – the distal or ancient (2,000-4,000 years old) water that is under artesian pressure, and the proximal or younger water (10 to 20 years old).

“The proximal and young groundwaters show signs of contamination by recent activity in the recharge area,” Clark said.

“My interest and concern here is that we do not have a good understanding of how these groundwaters are recharged and what effect increased activity in the recharge area will have on the quality,” he added.

The exceptional cleanliness of the groundwater has been studied for 30 years by William Shotyk, Bocock Chair for Agriculture and the Environment at the University of Alberta, who owns a farm in the area.

It sparked a groundswell of opposition to a landfill site atop the aquifer. Construction of Dump Site 41 was halted at the 11th hour by Simcoe County Council in 2009. Now, there’s almost always a lineup of cars at the artesian well north of Elmvale, with many driving considerable distances to get the “world’s cleanest water,” or at least the cleanest water known to science.

(Note: The recently observed contaminants referred to by the scientists have not been observed in the artesian flows like the one north of Elmvale. They do not present a health threat to the public.)

Tiny Township Council, which heard from Shotyk and his University of Alberta colleague Mike Powell earlier this month, has agreed to be a partner in the team’s application to the Natural Sciences and Engineering Research Council of Canada (NSERC).

And, along with the Federation of Tiny Township Shoreline Associations, Tiny Township is appealing CRH Canada Group Inc.’s recent renewal of a permit to take water from Teedon Pit for aggregate washing.

After hearing from the scientists, councillors heard from consultant hydrogeologist Dave Hopkins of R.J. Burnside and Associates regarding an an application by the Sarjeant Company Ltd. for a renewal of its permit to take water. Hopkins identified deficiencies in the information provided by the company.

The history of the water shows there has been little political interest in understanding this unique resource – let alone taking a leadership role in advocating for its protection.

A stakeholders meeting held in Elmvale in June, 2019, when the groundwork for the NSERC application was being laid out, attracted just two elected politicians – Springwater Deputy Mayor Jennifer Coughlin and Wasaga Beach Councillor George Watson.

Shotyk made a presentation to Simcoe County Council in June, 2010, but has been rebuffed in any attempt to update county councillors on the research since then. Repeated appeals for a moratorium on activity at the recharge area to allow the study to proceed on undisturbed waters have fallen on deaf ears.

Conservative MPP Jill Dunlop, who went on a water walk in 2017 and talked of protecting the water before being elected in 2018, has since lost interest in the topic.

As for the Ontario Ministry of the Environment Conservation and Parks, which is responsible for water issues, its officials insist that ongoing aggregate activities by CRH Canada, through its division Dufferin Aggregates, and Sarjeant, have no impact on local water systems.

But Shotyk told council that, as he has collected samples from local wells as part of his ongoing research, at least two landowners in the vicinity of French’s Hill have told him their artesian flow is no longer flowing, and others have had sediment appear in their water. He has also seen changes in elements in one well that’s important in his study, but said he does not have enough data at this stage to determine its significance.

Asked by Councillor Tony Mintoff whether the area qualifies as environmentally sensitive, both Clark and Cherry said that it does. Why then, asked Mintoff, does the environment ministry not consider it to be so and deserving of protection?

The reason, Cherry said, is the way the ministry operates, based on Toronto-centric and big-city views that do not prioritize protection of the countryside groundwater environment.

“So it’s a failure of the Ontario system. Not all parts of the world operate like this.” And, he advised, “you need to protect yourself and the environment from the ministry of the environment.”

Once the drama of the Site 41 battle – led by Anishinaabe women and local farmers, and attracting support from across Ontario – was over, national news media interest in the exceptional water faded.

But on Sunday, Shotyk was interviewed on CBC Radio’s Fresh Air program, and was able to explain to a provincial audience the mystery the scientists hope to resolve – how young water, rainwater from within the last few decades, is filtered through the recharge area to an exceptional level of cleanliness.

“The water is a national treasure,” Shotyk said. “To have water of this purity 90 minutes north of Canada’s largest city is really amazing – and the experts really do not understand this artesian flow system and we want to have a chance to understand this system before we damage the system.”

Major study of “exceptional” water planned – but will it survive “disaster” of aggregate extraction?