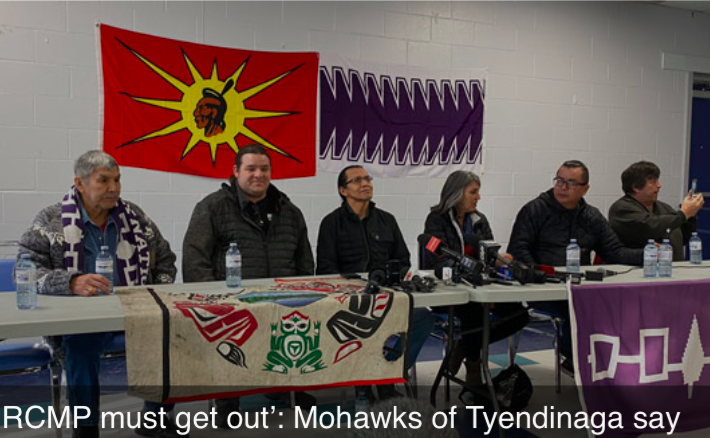 In light of recent events, we at the Wellington Water Watchers feel compelled to declare a statement of support for the Wet’suwet’en Nation:

Wellington Water Watchers extends our full support and solidarity to the people and the Hereditary Chiefs of the Wet’suwet’en Nation as they continue to assert their rights and legal authority by standing against oil and gas infrastructure in their lands.

Article 26(2) of the UN Declaration on the Rights of Indigenous Peoples (UNDRIP) states that “Indigenous Peoples have the right to own, use, develop and control the lands, territories and resources that they possess by reason of traditional ownership or other traditional occupation or use, as well as those which they have otherwise acquired.”

UNDRIP affirms the right of Indigenous nations to give free, prior, and informed consent to activities on their lands. Through the Unist’ot’en camp and the Gidimt’en checkpoint, the Wet’suwet’en are exercising their inherent right to govern their territory and to say no to a pipeline project that they did not consent to.

Wet’suwet’en hereditary chiefs have been clear that pipelines on their lands will threaten their traplines, animals in the region, and the pristine Morice River (Wedzin Kwah), which is an important source of fresh drinking water and salmon. The Coastal Gas Link Pipeline is also incompatible with climate action.

The recent arrests and forceful removal of peaceful land defenders from the Wet’suwet’en Nation by the RCMP is in direct violation of the principles of UNDRIP.

Wellington Water Watchers condemns the use of militarized police forces against Indigenous people who are defending their territory from unwanted development that would threaten the ecological and cultural integrity of their lands.

In addition, where treaties have not been signed, such as in the traditional territory of the Wet’suwet’en Nation, the rights and authority of Hereditary Chiefs to govern activities on their territory were recognized and upheld by the Supreme Court of Canada in the 1997 Delgamuukw decision.

We support the legal challenge launched by two Wet’suwet’en House Chiefs which asks the Federal Court to declare that Canada has a constitutional duty to keep the country’s greenhouse gas emissions well within the Paris Agreement limit of 2 ̊C above pre-industrial levels.

It is unacceptable for Canadian governments to trample on Indigenous rights in the name of oil and gas development in a time when those governments should instead be building true nation-to-nation relationships with Indigenous Nations and investing in real solutions to the escalating climate crisis.

Wellington Water Watchers calls on the Federal Government and the BC Government to respect the demands of the Wet’suwet’en Hereditary Chiefs. In their own words:

We express our deep thanks to the Wet’suwet’en people, who are protecting their lands, waters and the climate we all depend on. We witness the courage and strength of this stand. Thank you for these efforts that benefit all Canadians. We send our sincere gratitude.