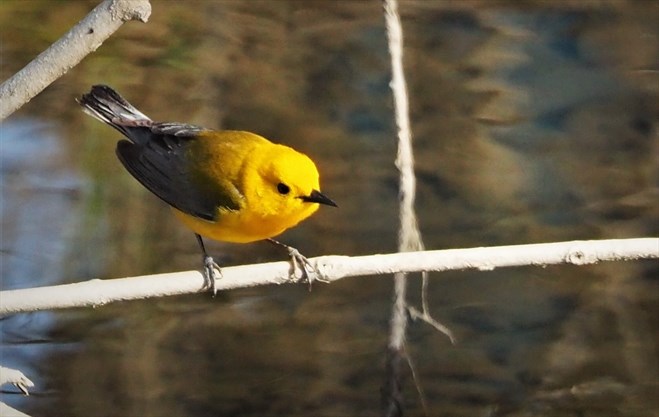 Hundreds of people have flocked to the Tiny Marsh this spring to see the endangered prothonotary warbler, a brilliant yellow bird normally only seen in Canada at Point Pelee.

“People don’t realize that there are only 30 mature individuals of this species in the province of Ontario,” said Ken MacDonald, an avid birder and program director of the Midland Penetanguishene Field Naturalists Club (MPFNC).

But if the omnibus Bill 108 – More Homes, More Choice Act passes in the Ontario Legislature, this bird and many of the other plant and animal species currently covered under the Endangered Species Act (ESA) are at risk of losing protection, said Brian Bissell, president of the MPFNC.

Schedule 5 of the bill would allow developers to pay a fee to allow development that harms species and their habitats, he said: “They are calling that ‘pay to slay.’”

It also proposes to delay listing of species assessed by the Committee on the Status of Species at Risk in Ontario and opens the committee to members who are non-scientists.

“It’s just one item in this huge omnibus bill. It will make it easier for animals to be taken off the list and more difficult to add animals on the list,” said Bissell.

Members of the MPFNC submitted comments to the Ford government fighting Bill 108 before the May 18 deadline. Bissell said people can still write their local MPP to voice their opinion.

MacDonald said the province should be strengthening the ESA not diluting it.

“Protecting endangered species should be above politics. It should be something everyone supports.”

On May 6, the United Nations released a report that begins “Nature is declining globally at rates unprecedented in human history — and the rate of species extinctions is accelerating, with grave impacts on people around the world now likely.”

The report was approved at the Intergovernmental Science-Policy Platform on Biodiversity and Ecosystem Services Plenary in Paris.

“In these times when we are in the middle of a mass extinction, it could be strengthened,” MacDonald said.

The prothonotary warbler is not seen in any other Canadian provinces.

“This is the kind of feature bird at Point Pelee that thousands of birders want to see. With only 30 of them in Ontario, shouldn’t they be protected?”

Other species that could be delisted from protection include bobolink, chimney swifts, Eastern whip-poor-will, cerulean warbler, as well as a host of mammals including the Algonquin wolf.

The MPFNC is a member of the Ontario Naturalists Network that has 30,000 members in Ontario.

Ontario Nature together with Ecojustice and the David Suzuki Foundation is fighting Bill 108.

For more information about the club visit their Facebook page.