Campaign on for top jobs across Simcoe County 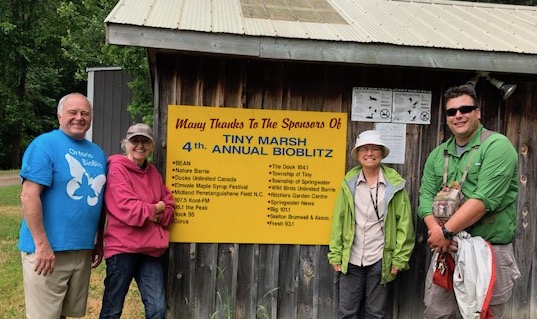 Keeping the electorate in suspense? Lulling the opposition into complacency? Several candidates in the race for the top job in municipalities across Simcoe County held off until the last minute to declare their intentions.

-In Adjala-Tosorontio, Doug Little was a deadline-day entrant. He is looking to step up as Mayor Mary Small Brett leaves the field. Deputy mayor from 2006-2010, a councillor in 2010-2014, -re-elected deputy in 2014, he’s seen as having been the main decision-maker in the municipality. It will be an interesting campaign as he faces Councillor Floyd Pinto, one of a minority of two on council (the other being Councillor Bob Meadows) who have consistently raised their voices on issues of development, aggregate extraction and environmental degradation. Meadows is running for deputy mayor along with George Gaffiero and John Greer.

– Penetanguishene Mayor Gerry Marshall also waited until Thursday July 27 to throw his hat in the ring, but no surprise – few expected the current county warden to step back from the political fray. He’s fresh off a poor showing in the provincial election, in which he ran for the Liberals (an attempt four years ago to seek the NDP provincial nomination was rejected by the riding association). Mike Cadieux, his opponent in 2014, was listed as running for the mayoralty against Ward 2 Councillor Doug Leroux, but on Thursday, the day Marshall filed, Cadieux withdrew and put his name down as a candidate for councillor. Of note, the recently retired Wasaga Beach CAO George Vadeboncoeur – centre stage in many of that town’s controversies – is running for council in Penetanguishene.

-A pair of dark horses have surfaced in Bradford-West-Gwillimbury. Mayor Rob Keffer – elected on a reform platform in 2014 – had to wait until the 11thhour to find out that he would not be acclaimed. He’s being opposed by two men who really want to be mayor – of somewhere. Pat Roberge ran for mayor in Toronto the last election and Nicola Iamonico ran for mayor in Hamilton, also in the last election.

The Guergis brothers – Dave, former mayor of Essa and Tony, former mayor of Springwater – are other late entrants seeking mayoral positions. The voters in each municipality have previously spoken on these two, decisively rejecting Dave in 2010, and Tony in 2010 and 2014. Enough said.

The Springwater mayoralty race pits against each other two men who ran on the same ticket in 2014. Grenfel native Bill French successfully opposed the pro-development stance taken by the previous council led by Linda Collins. Don Allen, a newcomer to the township, defeated incumbent deputy mayor Dan McLean. French and Allen have since fallen out. Ward 3 Councillor Jennifer Coughlin and former Toronto fire chief Jim Sales will be battling it out for deputy. Development, with the Midhurst Secondary Plan as a flashpoint – was the key issue in 2014. With the MSP at a critical stage, it will be again, with all candidates likely to come under scrutiny for their stance.

In Tiny, Mayor George Cornell and Deputy Mayor Steffen Walma are both home free. This, in Tiny? where politics have been legendarily confrontational! If nothing more, it’s an indication of a serious change in tone. The three incumbent councillors do have a race on their hands, with two challengers.

In Collingwood, two-term mayor Sandra Cooper isn’t running again. The election should be enlivened by the September start of a judicial inquiry into the 2012 sale of Collingwood Utility Services Corporation to PowerStream Inc. and the subsequent allocation of proceeds of the transaction for recreational facilities at Central Park and Heritage Park. The role of Cooper’s brother, former MP Paul Bonwick, is expected to come under scrutiny. Deputy Mayor Brian Saunderson, elected in 2014 as a critic of the 2010 council, is running for mayor. He’s opposed by retired OPP detachment commander John Trude and businessman Michael Blair, a newcomer to Collingwood.

In New Tecumseth, Madhunt reporter and editor Tony Veltri, a sharp-eyed council observer for the past 28 years, is entering the political arena, challenging incumbent Rick Milne, a genial old-style politician elected deputy mayor in 2010, and mayor in 2014. Milne has presided over a massive urbanization of the municipality. It will be a campaign to watch.

Two strong contenders face off in the battle for the mayor’s job in Innisfil: former mayor Barb Baguley (elected amid high hopes for change in 2010, defeated by Gord Wauchope in 2014) and Deputy Mayor Lynn Dolin, who has made her mark on the provincial scene as head of the Association of Municipalities of Ontario. Ward 4 Councillor Stan Daurio is also in the race. There are five candidates for the deputy position, including former deputy mayor Dan Davidson, defeated by Dollin in 2014.

Some jockeying for position appeared to take place in Severn, where long-time incumbent Judith Cox withdrew from seeking re-election for deputy mayor on July 3, the day before Ward 2 Councillor Jane Dunlop (wife of former Simcoe North MPP Garfield and mother of newly elected Simcoe North MPP Jill) put her name in for the position. It seems incumbent Mayor Mike Burkett and Dunlop are acclaimed.

In Midland, Mayor Gord McKay announced some time ago he would not seek re-election. Facing off are Ward 3 Stewart Strathearn, Ward 2 Councillor Jack Contin, and former councillor Bob Jeffery, defeated four years ago by Mike Ross in the race for deputy mayor. Ross is defending his DM position against Ruth Hackney, who also ran unsuccessfully for that position in 2014. Running in Ward 1 are two former mayors, Jim Downer and George MacDonald.

In Ramara, Ward 2 Councillor Marg Sharpe is challenging incumbent Basil Clarke for the mayoralty. Former mayor Bill Duffy initially entered the fray and then withdrew to file as a councillor candidate in Ward 2.

In 2014, Tay Mayor Scott Warnock and Deputy Mayor Bill Rawson were acclaimed. Rawson, sadly, died in 2016 after resigning from council due to ill-health. Ward 2 Councillor Dave Ritchie was appointed to replace him and is now running for mayor, opposed by former Tay CAO Ted Walker. Warnock is not seeking re-election. Ward 1 Councillor Jim Crawford and Ward 2 Councillor Gerard LaChapelle are chasing the deputy mayoralty.

In Clearview, incumbent Chris Vanderkruys is seeking re-election. Ward 2 Councillor Doug Measures is running against him. Vanderkruys may be doing a bang-up job in Clearview, but his presence at Simcoe County has been muted – he’s been a regular absentee from county council meetings. The county portion of the jobs of mayor and deputy mayor tends not to get scrutiny at election time, which is regrettable. Significant power resides there and it’s a substantial portion of residents’ tax bill. Deputy Mayor Barry Burton has been acclaimed.

In Oro-Medonte, Harry Hughes has ruled as mayor for 12 years, and was deputy mayor and councillor before that. In 2014, he was acclaimed. This time, former councillor Sandy Agnew is running for the mayoralty, after eight years of working in the trenches of community activism. There couldn’t be a greater contrast between the philosophy and style of the two men. Another race to watch. Also running is Ward 4 Councillor John Crawford, while incumbent Deputy Mayor Ralph Hough is being challenged by Ward 5 Councillor Scott Jermey.

Let’s not forget Wasaga Beach. The term of political rookie Brian Smith who displaced mayor Cal Patterson has been roiled by controversies too numerous to mention – one example being the proposed sale of Wasaga Beach’s power corporation, foiled by a massive citizen revolt. Deputy Mayor Nina Bifolchi who, supported by Councillor Sylvia Bray, has a four-year record of critical scrutiny of Smith’s agenda, is running against him. She has made an election issue of a downtown development deal that Smith is apparently trying to push through despite council’s lame duck status. Bray is running for deputy mayor, opposed by councillor Bonnie Smith.

For more information, see listings on www.aware-simcoe.ca under Candidates/Election 2018. Information regarding the 2010 and 2014 elections can be found under the AWARE button in the menu bar.