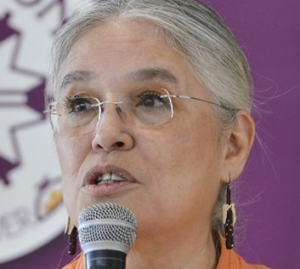 By Brent Patterson Council of Canadians

Nestle was there to seek the Band Council’s support for its application to the provincial government to continue to draw water for its bottled water operations from Six Nations traditional territory.

Anna Milner, who is with the Ministry of Environment and Climate Change, says, “In addition to the ministry’s duty to consult, the ministry has asked Nestle to engage these communities directly to listen to their concerns and work with them.”

Nestle’s Adreanne Simard replied that she couldn’t answer that question and that “some of what you are hearing isn’t the truth.”

Chief Hill then stated, “Well the truth is you’re taking the water out of the ground and we don’t want you to.”

And given Monday’s meeting was a ‘meet and greet’ and not a formal consultation, Chief Hill also warned Nestle, “We don’t want to see any of your propaganda saying that we consulted with Six Nations.”

The Council of Canadians stands in solidarity with the people of the Six Nations of the Grand River and their concerns about Nestle’s water-takings.

We have highlighted that while Nestle extracts water from Six Nations territory for its highly profitable bottled water business, 11,000 residents of Six Nations do not have access to clean drinking water.

We have also emphasized that any water takings require the free, prior and informed consent from Six Nations of the Grand River as recognized under the United Nations Declaration on the Rights of Indigenous Peoples.

The Council of Canadians calls on Premier Kathleen Wynne to take action on this issue immediately rather than seemingly avoiding making a decision on these expired permits until after the June 7 provincial election.