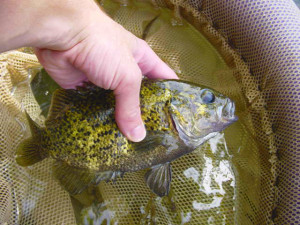 A rock bass. Researchers have detected build-ups of human antidepressants in the brains of this fish species, among others, in the Niagara River. -Wikimedia Commons photo

BUFFALO, N.Y. — Human antidepressants are building up in the brains of bass, walleye and several other fish common to the Great Lakes region, scientists say.

In a new study, researchers detected high concentrations of these drugs and their metabolized remnants in the brain tissue of 10 fish species found in the Niagara River.

This vital conduit connects two of the Great Lakes, Lake Erie and Lake Ontario, via Niagara Falls. The discovery of antidepressants in aquatic life in the river raises serious environmental concerns, says lead scientist Diana Aga, PhD, the Henry M. Woodburn Professor of Chemistry in the University at Buffalo College of Arts and Sciences.

“These active ingredients from antidepressants, which are coming out from wastewater treatment plants, are accumulating in fish brains,” Aga says. “It is a threat to biodiversity, and we should be very concerned.

“These drugs could affect fish behavior. We didn’t look at behavior in our study, but other research teams have shown that antidepressants can affect the feeding behavior of fish or their survival instincts. Some fish won’t acknowledge the presence of predators as much.”

If changes like these occur in the wild, they have the potential to disrupt the delicate balance between species that helps to keep the ecosystem stable, says study co-author Randolph Singh, PhD, a recent UB graduate from Aga’s lab.

“The levels of antidepressants found do not pose a danger to humans who eat the fish, especially in the U.S., where most people do not eat organs like the brain,” Singh says. “However, the risk that the drugs pose to biodiversity is real, and scientists are just beginning to understand what the consequences might be.”

The research team included other scientists from UB, Ramkhamhaeng University and Khon Kaen University, both in Thailand, and SUNY Buffalo State. The study was published on Aug. 16 in the journal Environmental Science and Technology.

A dangerous cocktail of antidepressants in the water

Aga has spent her career developing techniques for detecting contaminants such as pharmaceuticals, antibiotics and endocrine disrupters in the environment.

This is a field of growing concern, especially as the use of such chemicals expands. The percentage of Americans taking antidepressants, for instance, rose 65 percent between 1999-2002 and 2011-14, according to the National Center for Health Statistics.

Wastewater treatment facilities have failed to keep pace with this growth, typically ignoring these drugs, which are then released into the environment, Aga says.

Antidepressants stood out as a major problem: These drugs or their metabolites were found in the brains of every fish species the scientists studied.

More than half of the fish brain samples had norsertraline levels of 100 nanograms per gram or higher. In addition, like the rock bass, many of the fish had a medley of antidepressant drugs and metabolites in their brains.

Evidence that antidepressants can change fish behavior generally comes from laboratory studies that expose the animals to higher concentrations of drugs than what is found in the Niagara River. But the findings of the new study are still worrisome: The antidepressants that Aga’s team detected in fish brains had accumulated over time, often reaching concentrations that were several times higher than the levels in the river.

In the brains of smallmouth bass, largemouth bass, rock bass, white bass and walleye, sertraline was found at levels that were estimated to be 20 or more times higher than levels in river water. Levels of norsertraline, the drug’s breakdown product, were even greater, reaching concentrations that were often hundreds of times higher than that found in the river.

Scientists have not done enough research yet to understand what amount of antidepressants poses a risk to animals, or how multiple drugs might interact synergistically to influence behavior, Aga says.

Wastewater treatment is behind the times

The study raises concerns regarding wastewater treatment plants, whose operations have not kept up with the times, says Aga, a member of the UB RENEW (Research and Education in eNergy, Environment and Water) Institute.

In general, wastewater treatment focuses narrowly on killing disease-causing bacteria and on extracting solid matter such as human excrement. Antidepressants, which are found in the urine of people who use the drugs, are largely ignored, along with other chemicals of concern that have become commonplace, Aga says.

“These plants are focused on removing nitrogen, phosphorus, and dissolved organic carbon but there are so many other chemicals that are not prioritized that impact our environment,” she says. “As a result, wildlife is exposed to all of these chemicals. Fish are receiving this cocktail of drugs 24 hours a day, and we are now finding these drugs in their brains.”

The problem is exacerbated, Singh says, by sewage overflows that funnel large quantities of untreated water into rivers and lakes. In August, for example, The Buffalo News reported that since May of 2017, a half billion gallons of combined sewage and storm water had flowed into local waterways, including the Niagara River.

Human antidepressants building up in brains of fish in Niagara River

The concentration of human drugs was discovered by scientists from University at Buffalo, Buffalo State and two Thai universities, Ramkhamhaeng University and Khon Kaen University.

Active ingredients and metabolized remnants of Zoloft, Celexa, Prozac and Sarafem — drugs that have seen a sharp spike in prescriptions in North America — were found in 10 fish species.

Diana Aga, professor of chemistry at University at Buffalo, says these drugs are found in human urine and are not stripped out by wastewater treatment.

“It is a threat to biodiversity, and we should be very concerned,” Aga said in a release from the university.

“These drugs could affect fish behaviour. We didn’t look at behaviour in our study, but other research teams have shown that antidepressants can affect the feeding behaviour of fish or their survival instincts. Some fish won’t acknowledge the presence of predators as much.”

The Niagara River, which carries water from Lake Erie to Lake Ontario, is already under stress, with reports this summer of untreated wastewater released into the river.

The research, published in the journal Environmental Science & Technology, found levels of antidepressants in fish brains that were several times higher than levels in the river itself, indicating that the chemicals are accumulating over time.

Antidepressants stood out as the major problem.

The rock bass had the highest concentrations of antidepressants, but several fish had a medley of drugs in their bodies.

Aga said she did not believe the chemicals were a threat to humans, as people do not usually eat fish brains. However, she was concerned about the health of fish species who are continually subjected to an influx of chemicals, as well as the delicate balance among species.

Aga said wastewater treatment plants have not kept up with the times in attempting to remove drugs from their effluent.

Between 1999-2002 and 2011-14, the number of U.S. residents using antidepressants rose by 65 per cent, according to the National Center for Health Statistics.

Wastewater treatment focuses on killing disease-causing bacteria and on extracting solid matter but not on removing chemicals that might be found in human urine, Aga said.

“These plants are focused on removing nitrogen, phosphorus, and dissolved organic carbon but there are so many other chemicals that are not prioritized that impact our environment,” she said. “As a result, wildlife is exposed to all of these chemicals. Fish are receiving this cocktail of drugs 24 hours a day, and we are now finding these drugs in their brains.”