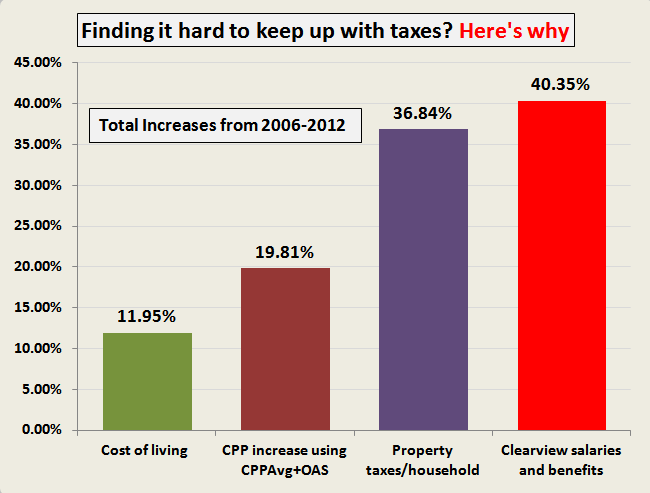 A group of Clearview citizens has collected data on the township’s finances and organized it in a get-it-at-a-glance graphic style.

Much of the data is taken from the Financial Information Returns, publicly available audited reports that municipalities are obliged to file with the province.

It’s all posted at www.clearviewtownship.com which you might think is the official township website, but no – that’s www.clearview.ca. “Surprisingly,” an entry on the citizens’ website states, “the name was never registered by the township of Clearview even during its recent rebranding exercise.”

So – interested in whether tax increases in Clearview are in step with the cost of living? It appears not. The tabulation shows the cost of living has gone up 11 per cent since 2006, while Clearview property taxes have risen 36 per cent and Clearview staff salaries and benefits are up 40.35 per cent.

Another graph shows calculations of debt burden as a percentage of total revenues, Clearview “wins” with 60.04 percent, followed by Severn at 54.44 per cent.

The site is the creation of the Concerned Clearview Citizens group. Member Creemore resident Peter Lomath is a driving force, having spent thousands of hours tabulating the FIR reports for Simcoe County and neighbouring municipalities.

He explains on the site: “The FIR filings use common line numbers and formats across all Ontario municipalities which makes it very easy to run comparisons and also to allow simple validation of where the data came from and how it was used to create the graphs on this site.”

This means you can go to the source and get the information for yourself.

Context could provide justification for some apparent anomalies or excesses. Or perhaps not. This is the time to seek explanations from incumbents, and comment from candidates new to council.