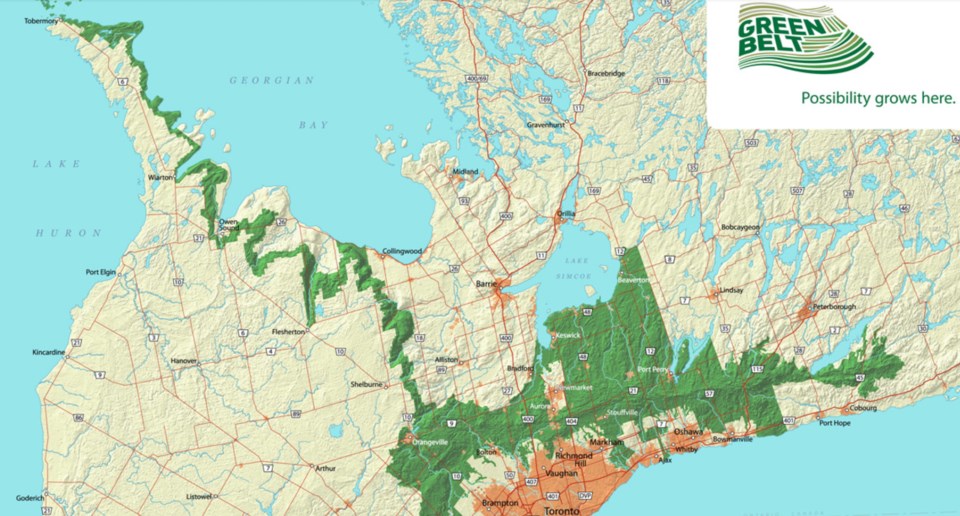 The former Mississauga mayor, who earned the nickname “Queen of Sprawl” during her tenure, calls the Ford government’s decision to open areas up for development “brave.”
From the Toronto Star, Jan 20 2023
ByRachel Mendelson Staff Reporter
Map showing Ontario’s Greenbelt.Image courtesy of the Greenbelt Foundation

As the Ford government faces increased scrutiny over its decision to open up parts of the Greenbelt for housing development, the head of an advisory group that was once seen as a key defender of the protected land has thrown her support behind the controversial move.

In an open letter on Wednesday, Hazel McCallion, the longtime former mayor of Mississauga, who was recently appointed chair of the Greenbelt Council, called the government’s decision “brave, important, responsible and necessary.”

“The most recent changes to the Greenbelt, actually do make sense,” the 101-year-old McCallion wrote. “If we are to meet the challenges of the epically growing human population of the GTA and provide truly livable and affordable communities, then we must allow for housing and new communities to be created where it makes sense to do so. ”Those fighting the government’s plan say they are not surprised Ford has found an ally in McCallion, who presided over explosive, low-density growth in Mississauga that earned her the nickname “Queen of Sprawl.”
However, her public support for developing parts of the Greenbelt is a dramatic about-face for the council, which was created to provide impartial advice to the province on how to manage the protected land, and has previously opposed proposals that could put it at risk. In late 2020, seven members resigned in protest of legislation that limited the mandate of Ontario’s local conservation authorities to protect the environment from development.
“It’s very, very shocking to see someone who is now the head of Greenbelt Council defending the irrational attacks on the Greenbelt,” said Tim Gray with the non-profit advocacy group Environmental Defence. “This letter would lead one to conclude that (the Greenbelt) has lost a defender, that’s for sure.”