LETTER: Bill 23 ‘not consistent with a democratic society’ 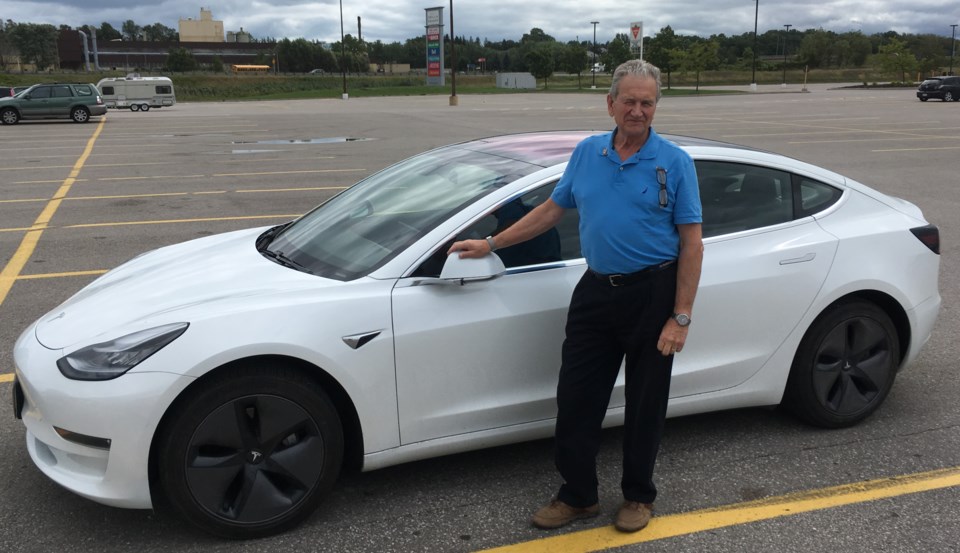 From OrilliaMatters Nov 20 2022
Letter to the Editor by Stan Mathewson, Sustainable Orillia

Stan Mathewson, shown with his Tesla, has penned a letter to the province outlining concerns about the proposed Bill 23

Sustainable Orillia is a not-for-profit organization advocating for decisions that move us closer to — not farther from — a sustainable community for the citizens of Orillia and the surrounding areas — the townships of Severn, Oro-Medonte, Ramara and Rama First Nation.

In our view, Bill 23 is flawed in that it does not contain sufficient protection for wetlands and Greenbelt areas, and, while it is a housing bill, it hands too much control to land developers to regulate themselves in respect to environmental concerns. These outcomes move us farther from sustainability, an outcome that is not affordable now or for future generations.

We do acknowledge the need for additional housing that is both accessible and affordable, but do not agree that it has to come at the expense of a sustainable environment.

It appears that most of the changes made in Bill 23 are targeted at removing wetland and woodland protections and creating a process for selling off conservation lands without oversight.

“Schedule 2, Conservation Authorities Act, 3 (2) Section 21.1.1 of the Act is amended by adding the following subsection: (1.1) An authority shall not provide under subsection (1), within its area of jurisdiction, a municipal program or service related to reviewing and commenting on a proposal, application or other matter made under a prescribed act.”

We are also concerned that the bill will strip power from municipalities that are trying to build more new homes within their city boundaries, forcing them to sprawl instead. The bill will also take away power to develop green development standards.

While the bill includes some positive zoning changes that will allow a few more homes in cities and near transit stations, the planning for housing must be done with due consideration for all of the factors that exist today, such as the availability of land within existing town and city limits. Land is available inside existing built-up areas and on undeveloped land outside of greenbelts and wetlands.

In the case of Orillia, where council has asked planning staff to work with the community to identify opportunities for further intensification, the proposed act will have the effect of nullifying this action by Orillia city council, just as it has restricted the decisions of other duly elected municipal councils.

We, along with other community groups, have been working closely with Orillia city staff to identify intensification opportunities. In our informed view, the solution to more housing must, and can, come from densification. Greenbelts and other environmentally-sensitive areas must be protected.

Farms provide food and food security (threatened these days by the instability brought on by climate changes). Relying too heavily on undeveloped farmland whittles away too much of the land devoted to agriculture; reducing the Greenbelt and green spaces in particular threatens the future water supplies for southern Ontario. The Report of the Ontario Housing Affordability Task Force (February 2022) recognizes the danger of doing so.

In addition, the task force report points to the option of densification in the land currently available to developers for building, thereby removing the need for intrusions into the Greenbelt and wetland areas. Under the heading “Require greater density” the report states:

“Land is not being used efficiently across Ontario. In too many neighbourhoods, municipal rules only allow single-family homes — not even a granny suite. Taxpayers have invested heavily in subway, light rail, bus and rail lines and highways, and the streets nearby are ideally suited for more mid- and high-rise housing. Underused or redundant commercial and industrial buildings are ripe to be redeveloped into housing or mixed commercial and residential use. New housing on undeveloped land should also be higher density than traditional suburbs, especially close to highways. Adding density in all these locations makes better use of infrastructure and helps to save land outside urban boundaries. Implementing these recommendations will provide Ontarians with many more options for housing. (p. 4)”

In addition there are significant opportunities for Ontario agriculture not only to continue to feed our people but, through regenerative agriculture, to contribute significantly to carbon sequestration, thereby contributing to climate change mitigation, the value of which will ultimately outweigh any perceived lost opportunities.

The Report of the Ontario Housing Affordability Task Force also found that exclusionary zoning is a major restriction to achieving additional and affordable housing in Ontario. Under the heading “Stop using exclusionary zoning that restricts more housing” the report states:

“Too much land inside cities is tied up by outdated rules. For example, it’s estimated that 70 per cent of land zoned for housing in Toronto is restricted to single-detached or semi-detached homes.[11] This type of zoning prevents homeowners from adding additional suites to create housing for Ontarians and income for themselves. As one person said, ‘my neighbour can tear down what was there to build a monster home, but I’m not allowed to add a basement suite to my home.’ (p. 10)”

An additional concern that this bill raises is the transfer of costs. Sustainable Orillia is a community not-for-profit and is funded in part by the taxpayer. Our members are all taxpayers. It is clear that the proposal to eliminate development fees is going to shift the cost to taxpayers who will in therefore be subsidizing an already very profitable sector of our economy with no clear promise of more and more affordable homes.

Our final comment is this: Public engagement in the development process needs to be protected. A member of the public should be permitted to be a “specified person” for the purpose of asking for an Official Plan amendment.

A situation where only a developer can appeal a council decision going forward removes the ability of citizens to hold both councils and developers accountable. The proposal to assign costs to unsuccessful proponents further puts a chill on public involvement. This appears to be an effort to stifle public opinion and dialogue and is not consistent with a democratic society.

We are also concerned with the loss of upper-tier planning control in Simcoe County and want to see it maintained.

Lastly, it is unknown how Bill 23 will affect the government’s ability to keep its promise to keep Lake Simcoe healthy. It would appear that this legislation places the Lake Simcoe Protection Act in jeopardy.

To conclude, we believe that Bill 23 as drafted needs serious review and extensive deliberation. It must reflect a broader perspective on the public good.

While there is an urgent need to supply new housing, it should not come at the expense of the environment and the health and welfare of future generations. The emphasis should be on providing for more housing through more efficient use of the available space within our cities and townships while, at the same time, protecting the environment in order to secure a sustainable future for all Ontarians.