GUEST COLUMN: Something fishy going on at Inch Farm 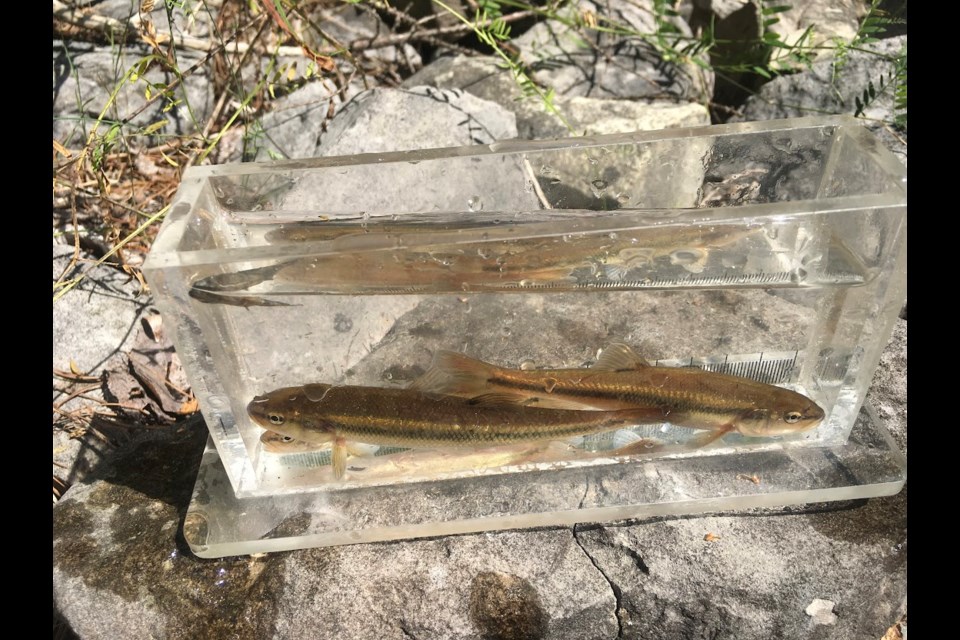 Bob Bowles has been studying the tributaries in the Inch Farm area and documenting what he has discovered. Above are two creek chub and one brook stickleback from the south tributary from Aug. 19. | Supplied Photo

From OrilliaMatters, September 3, 2022
By Bob Bowles

The following is a guest column by Bob Bowles on the impact of planning decisions on our natural environment, with a focus on the development planned for the Inch Farm on the border between Orillia and Severn Township. Bowles is a naturalist and is a wetland evaluator who has been studying the natural features for decades. He first raised alarm bells about this project in February.
********************
A letter of concern dated June 19, 1990, about the harmful alteration, destruction, and displacement of fish habitat in the south tributary of the Inch Farm wetland, was sent by a Ministry of Natural Resources (MNR) fish biologist to C.C. Tatham & Associates, the engineering consultants hired by Mark Rich Homes (Angelo Orsi) about a housing development they were planning to build on the Inch Farm wetland.

The MNR biologist stated there was prime fish habitat including coldwater fish habitat for species like brook trout, brown trout and rainbow trout in the south tributary and he was concerned about the impact of the development on this habitat.

He suggested larger setbacks from the stream for housing and tree plantings to provide more shade over the stream for fish. At that time, the MNR and federal Department of Fisheries and Ocean had legislation related to the protection of fish habitat and its destruction.

His letter of concern was answered on Aug. 29, 1990 by Tatham engineer, R.J. Meadley who wrote that they had retained Michael Michalski Associates environmental consultants who completed a biophysical analysis of the site and provided a report with recommendations to preserve the environmentally significant features of the property.

Recommendations were made suggesting increases in the open space areas, additional greenbelt buffer zones and improvements to the water courses. The draft plan for the development was revised to incorporate the recommendations for increased open space and greenbelt areas.

The preservation of the greenbelt areas and the improvements to the water courses could be specified in the subdivision agreement with the City of Orillia to ensure they were carried out as recommended. This was the beginning of the fish habitat alteration, destruction and displacement in the south tributary of the Inch Farm wetland.

Stormwater from the Rynard Subdivision and water flooding basements along Dancy Drive is pumped with great force through a five-foot diameter cement culvert under Highway 11 and flushed into an open ditch in the Inch Farm Wetland. It makes it way north through three 5.5-foot culverts under the arterial road, then flushed into the south tributary to three more culverts which run through the berm surrounding the pond and into the pond.

The federal Department of Fisheries and Oceans was gutted by the Stephen Harper Conservative government in Canada in 2016 but has been reinstated by the Liberal Government under Justin Trudeau. A new amendment on June 19, 2018 under the Fisheries Act Bill C-68 with a new section 34.4 which states:

Perched output culverts and design within the control structure prevent fish from moving upstream from the south tributary into the wetland and coldwater wetland tributary.

Also perched input culverts into the settlement pond again prevent upstream movement of fish. This design has displaced all the excellent fish habitat in the south tributary within the Inch Farm wetland.

However, it causes further destruction of fish habitat in the south tributary below the control structure. Stormwater from housing developments and shopping plaza parking lots contain garbage, gas, oil, chemicals, fertilizers, pet waste, insecticides, pesticides, silt, bacteria and other waste materials and water heated by the sun on asphalt and cement. Not the cold, clear, pure water found in wetlands and critical for brook trout streams.

Brook trout live in clear, cool, well-oxygenated streams and lakes in water temperatures below 20 0C (68 0F) but thrive in water which ranges in temperature from 10-15 0C. They prefer a pH between 6.5 and 8.0 but can tolerate conditions as low as 5.0.

They spawn in our area from September to early December depending on water temperature. Spawning usually takes place over gravel beds in the shallows of the headwaters of streams when the water temperature is below 11 0C. Brook trout are unable to survive in water temperatures of 77°F (24°C) and stop growing at 73°F (23° C).

During August 2022, we checked for fish in both the north and south tributaries and were surprised with our findings.

Stormwater after a heavy rain coming under Highway 11 and flushed with great force into the wetland was 24 C (75 F.) After flowing across the wetland and through the culverts under the arterial road, water temperature was 22 C (72 F.)

Water flowing from the Walmart Plaza on Murphy Road and through the open ditch along Uhthoff Line before flowing into the wetland was 24 C (75 F.) All these stormwater inputs were much too warm for brook trout to survive and reproduce.

Water flowing from the arterial road culvert in the south tributary of the wetland before entering the settlement pond was 15 C (59 F) after mixing with the cold water of the wetland. The real problem was that the water in the pond was at 25.5 C (78 F.) The water from the pond outlet mixed with the water from Walmart and the wetland and flushed into the south tributary downstream from the control structure was at 21.7 C (71 F) and much too warm for trout to live.

Water from the wetland south of Uhthoff Line and through the culvert was at 18 C (65 F) and when it merged with warmer water from the pond and water in the south tributary where we captured the fish as at 21 C (70 F) which allowed the brook trout to survive but not thrive and probably not spawn even in November because of the warm stormwater being flushed into the stream.

Brook trout habitat has been greatly altered in the south tributary, displaced and destroyed by the pond in most of the tributary.

The new developers of the site, LIV Communities, have purchased the land and have hired the same consultants to build twice the number of houses on the wetland.

This will now start to impact on the north tributary since they have reduced the setbacks from the tributary to less than the minimum required distance and are proposing the build two new, large settlement ponds on either side of the north tributary. Stormwater input from the housing development into these ponds will contain garbage, pet waste, chemicals from fertilizers and insecticides, oil and gas spills and water heated in the hot sun on concrete and asphalt roads, sidewalks and parking lots.

This project did not proceed this summer since costs have greatly increased and the City of Orillia mayor and council have deferred the decision to the new council that will be elected in October. Therefore, the upcoming municipal elections are so important this October for the next four years.

Engineering reports state the organic peat land of the wetland is not stable enough to support the foundations and weight of housing that will be built at the site. The organic, fibric peat will have to be replaced by gravel and mineral clay soil that can support housing. This is the reason for the increase in cost.

In summary, the engineering and environmental consultants have destroyed the wetland and fish habitat over the 32 years that they have been working on this project and on the payroll of two major developers and now the City of Orillia as well. There have been many incorrect statements by the consultants over the 32 years of destroying the wetland and fish habitat, but this project has been very lucrative for them.

My whole career of an engineering technologist for Ontario Hydro was 32 years and my career as an environmental consultant and expert witness in projects like this one from 1990 to 2022 has been 32 years. Both these careers together have not been as lucrative for me, but much more satisfying since I am able to sleep at night knowing that I have always been honest and have done the best thing to protect the environment and the world we live in.

You will read about this wetland and habitat destruction again in the news in a few years as climate change impacts become more evident in our area.

Municipalities like ours will suffer most from these bad decisions.

Doug Ford’s provincial government is proposing giving municipal mayors more power to build housing developments. We need a mayor in the City of Orillia that can move housing projects to completion but protect areas like wetlands and trout streams which need to be off limits to development.