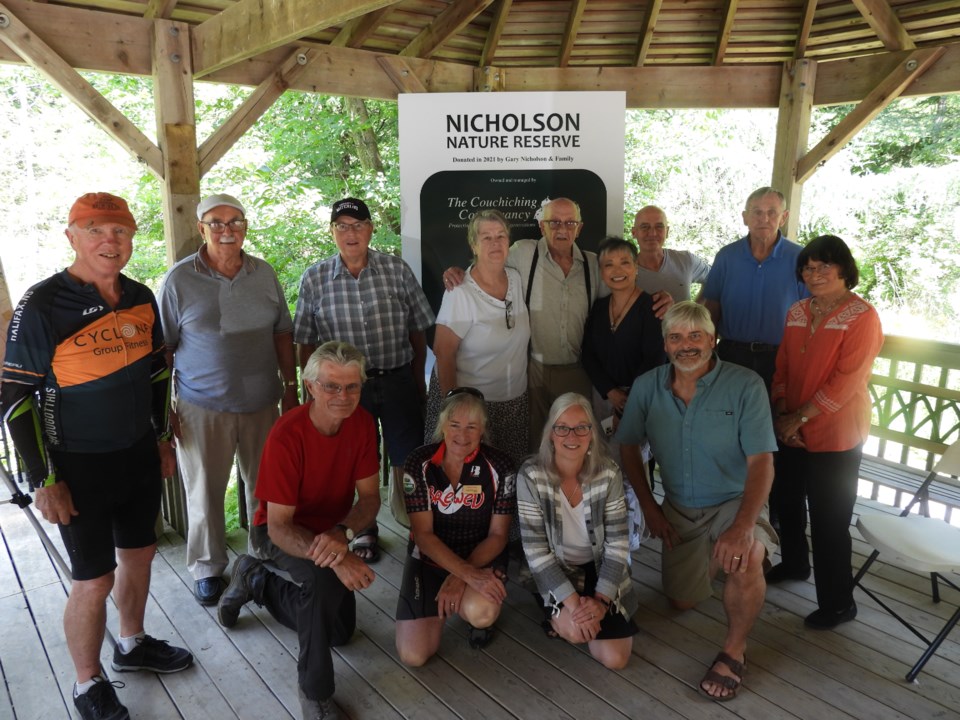 An in-person celebration of the Nicholson Nature Reserve took place at Grant’s Woods Nature Reserve recently, and a recording of the event will be made available on YouTube. Pictured are Gary Nicholson and family, as well as staff and members of the board of directors of the Couchiching Conservancy. | Supplied photo

The Couchiching Conservancy invites you to join in the celebration of our newest nature reserve with a virtual unveiling on July 27 at 7 p.m. on YouTube.

The Nicholson Nature Reserve is an 100-acre (40-hectare) parcel near Sebright.

The property was donated by Gary Nicholson in honour of his family, which has owned the property since the late 1800s. Located in Ramara Township with a corner touching the south shore of the Head River, this remote property is the fifth nature reserve created in the area since it was identified as a high priority by the Couchiching Conservancy, which operates in the territory of the Anishnaabeg.

“Thanks to the generosity of Gary Nicholson, the Nicholson family, and the hundreds of people who have donated to the Corridors Campaign, we have been able to create another beautiful nature reserve in the heart of the Black River Wildlands Corridor,” said Mark Bisset, executive director of the Couchiching Conservancy. “This reserve is very remote and difficult to access, but it provides habitat for a number of species at risk. It takes us one step closer to our goal of protecting a wildlife corridor that runs from the Mud Lake Wetland Complex in the south right up into Queen Elizabeth II Wildlands Provincial Park.”

This project was undertaken with Ganawenim Meshkiki Eastern Georgian Bay Initiative, the McLean Foundation and donors to the Corridors Campaign.

The landscape is a mixture of hardwood and mixed swamp, with some open granite outcrops. The landscape is a prime area for Blanding’s turtles (threatened), eastern wood pewee (special concern), yellow-billed cuckoo and many others. Connecting these protected landscapes is beneficial to large range species as well, such as moose, black bear and white-tailed deer.

You can learn about the Corridors Campaign and nature reserves on our website — www.couchichingconserv.ca.