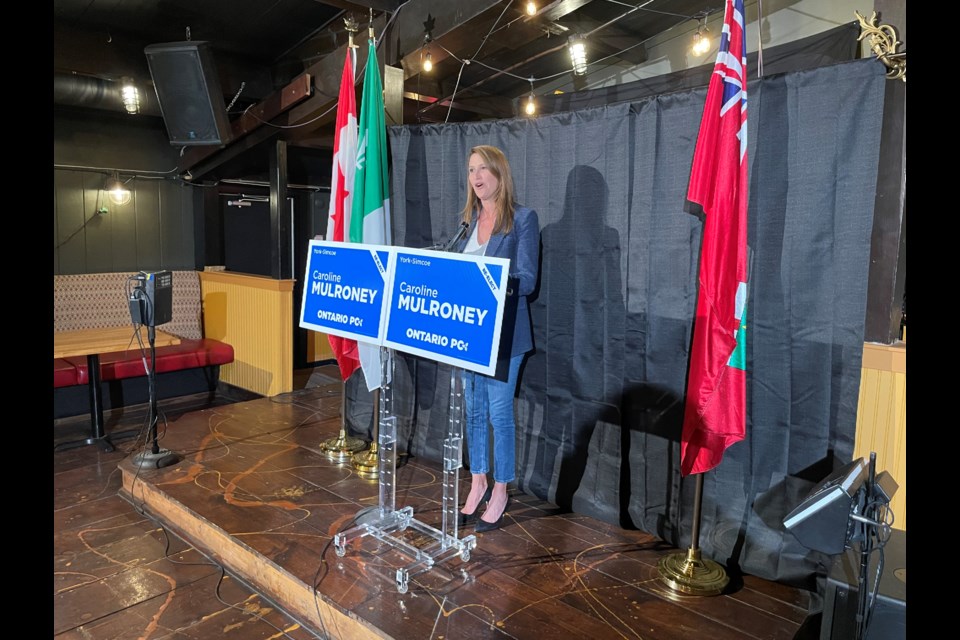 In her victory speech as MPP for York-Simcoe, Caroline Mulroney focused on the importance of the Bradford Bypass. | Rob Paul/BradfordToday

Progressive Conservative incumbent Caroline Mulroney has been re-elected as MPP for York-Simcoe.

“It feels great,” Mulroney said from the Lions and Suns Bar and Lounge in East Gwillimbury, where she and her supporters celebrated. “I’m really excited about being re-elected and getting a second mandate from the voters of York-Simcoe.”

“Tonight our Progressive Conservative message of economic growth and prosperity resonated with the people of York-Simcoe,” she said. “The job we started over four years ago is not done yet, and as your MPP I will continue to work hard every day to build a better York-Simcoe and a better future for our children.”

Mulroney, who had served as minister of transportation, emphasized how important it is to her to continue to champion the Bradford Bypass project.

“I’m looking forward to continuing with the Bradford Bypass,” she said. “We knocked on over 35,000 doors and heard overwhelmingly from constituents that they want us to get building. I’m looking forward to moving that forward. I want to thank our premier, Doug Ford, for his support of this project. This infrastructure will help our businesses, our farmers, and our families.”

With well over 50 per cent of constituents voting for Mulroney, she said most people support her and the PC plan.

“The plan we put forward to voters was very well received,” she said. “Moving forward the Bradford Bypass, which has been something people in Bradford and East Gwillimbury have been wanting for decades, led to a lot of support.”

Along with the Bradford Bypass, Mulroney talked about the importance of continuing to build in York-Simcoe as it grows.

“Our government is focused on keeping costs low,” she said. “I heard a lot about that and they wanted a plan to keep money in their pockets and our plan was well received. I’m excited we have another four years. I want to thank the people of York-Simcoe for putting their trust in me again. We will get it done.”