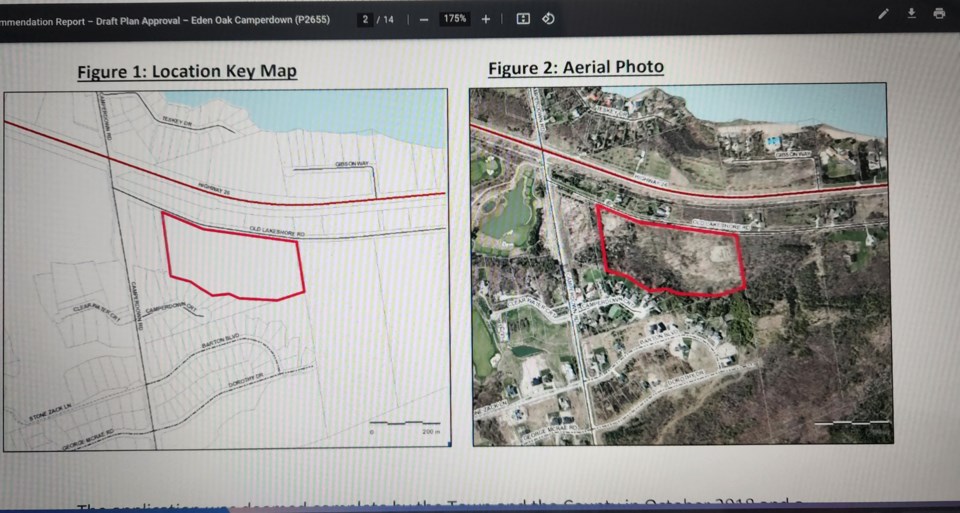 From CollingwoodToday, June 8, 2022
By Chris Fell

A developer planning to build houses in Thornbury has pushed back against The Blue Mountains council for withholding approval of the plan until affordable or attainable housing was included in the plan.

At its meeting on June 6, council clashed with the consultant for the Eden Oak Camperdown subdivision proposal and later voted to ask Grey County planning staff for an explanation for how the county is implementing provincial requirements for affordable and attainable housing.

Vanessa Simpson, the planning consultant for Eden Oak, spoke to council at the meeting and presented council with a letter advising that the proposed subdivision was not an appropriate location for affordable and attainable housing. Council at its previous committee of the whole meeting had withheld its support for Eden Oak until the proposal addressed the Grey County goal of 30 per cent of the units being set aside for affordable/attainable housing.

Simpson’s presentation did not sit well with members of council and the mood in the room didn’t improve when Simpson informed council that the starting price for units at Eden Oak would start at $1.9 million and be sized at a minimum of 2,400 square feet.

“Wow,” responded Mayor Alar Soever. “I guess that means we’re not going to be attracting too many young doctors to this development.”

Coun. Andrea Matrosovs said the suggestion from the developer that Eden Oak was not suitable for affordable/attainable due to a lack of nearby transit was not a strong one.

At that point in the meeting, Simpson advised council she had no further comments.

Later in the meeting, council had to deal with the resolution it had passed previously at committee of the whole that made its support for the proposal conditional on 30 per cent of the units to be set aside for attainable/affordable units and for a further study to be done on the stability of the slope at the rear of the development, which is in hazard lands the town will own after the development is finished.

Council acknowledged that this subdivision application was deemed complete before the county’s current Official Plan, which includes the 30 per cent attainable/affordable housing target, came into effect and backed off on that requirement for approval. Council instead voted to ask county planning staff for an explanation for how the Planning Act and provincial policies around attainable and affordable housing were being considered during the application process.

Mayor Soever noted that the county is the approval authority on subdivision applications.

“We’re merely indicating our support, or lack of support (for the proposal), it should be conditional on county staff explaining how their support of this satisfied the Planning Act and provincial policy statement,” said Soever.

The amended direction from council was approved in a 7-0 vote.