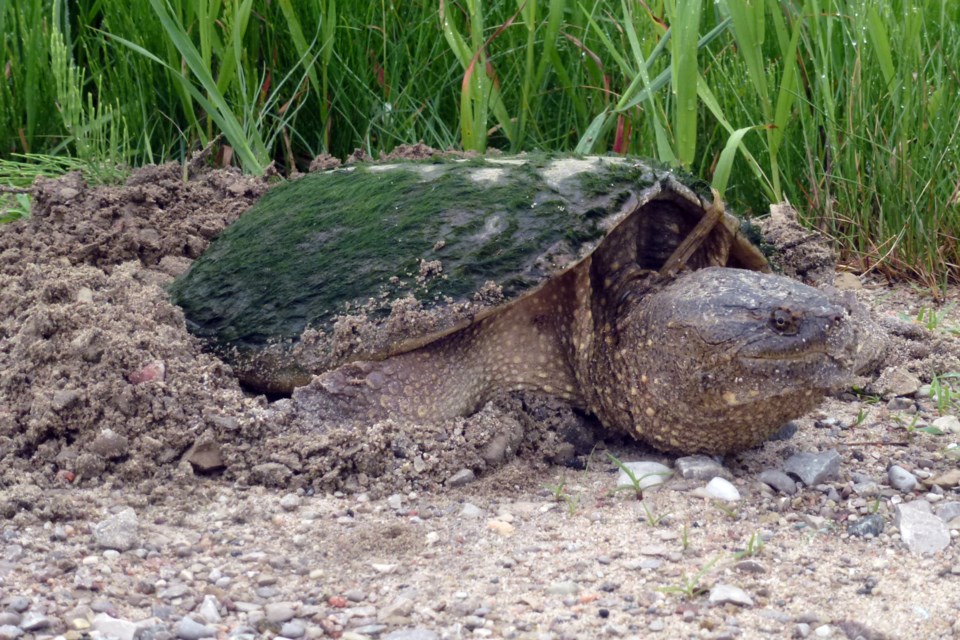 If this is mid-June it must be turtle season! All across southern Ontario the soil has warmed up enough to encourage female turtles to leave the safety of the swamp and venture forth to lay their eggs.

You may see these very pregnant reptilian ladies along sandy shores, in your garden or along the gravelled roadsides. And for some reason they seem to want to lay their eggs on the far side of the road … which is a frustrating trait for those who love turtles.

There is a saying going around the naturalists’ community: turtles are not speed bumps. It is almost unbelievable that a certain set of drivers actually aim their vehicles to hit a crossing turtle.

While I agree that there may well be occasion when it would be detrimental for your own safety to swerve around a turtle on the road, but to make the effort to drive deliberately over a turtle takes a special kind of stupid.

In our area (north Simcoe County) the more common turtle species you may encounter on the road will be midland painted turtle, snapping turtle and perhaps a Blanding’s turtle. If you are really lucky a spotted turtle might be found (and hopefully it’s a successful road crossing). Map and musk turtles tend to avoid roadways, but you never know for sure.

The eggs that are being laid are carried by turtles that are roughly between the ages of 18 and 70 (although some say turtles as old as 80 can still lay eggs). Mating took place some time earlier, and the sperm from the males can be held within the females for considerable time, until conditions are right in her mind that eggs should now be produced.

The eggs are about the size of ping-pong ball (slightly smaller for painted turtles) and around 20 eggs are laid per turtle (depends a bit on age and size of mama).

The sunshine continues to warm the soil and by autumn the baby turtles emerge from their underground nest. If they incubated at higher than 28 degrees Celsius the egg will produce a female; if incubated below that threshold temperature the emerging turtle will be male.

Of course there is the ongoing challenge of nest predation. Raccoons, skunks and foxes are masters at finding hidden egg clutches. It is very easy for these critters to dig them up and dine on turtle eggs all night long.

Over at the Tiny Marsh Provincial Wildlife Area a small yet dedicated crew is monitoring this annual cycle of egg laying; predated nests are tallied, and any new nests are covered with a wire cage to discourage predation.

Despite their efforts, the results are discouraging, as for the few cages that can be deployed there are already a huge number of nests that they discover which have already been destroyed.

By example, the two days of tallying nests they noted 23 midland painted turtle nests that contained 148 eggs had been eaten (the shells remain behind and the shape and size determine the turtle species); and 45 snapping turtle nests that had contained 857 eggs were also destroyed. And that’s just the nests that are easy to see on the 75% of the dyke system that is monitored.

So the good news is that there are at least 45 adult snapping turtles living in that area. But this is a somewhat concentrated site, so roadside turtles will be a bit farther between. However, raccoons have discovered that roads make excellent diners and the mortality rate of turtle eggs will be similar.

Ontario is home to eight species of turtles and most are now listed as a species at risk. Due to high mortality during the egg-laying season, their populations are stalled and breeding age turtles are not being replaced.

So, how might you assist these ancient species in their struggle to survive? If you see a turtle crossing a road, you might be able to assist it to scoot over a bit quicker (but ONLY if it is safe for you to be on the road!).

Another way is to cover a new nest site in a manner to discourage predation (I’ve seen everything from elaborate wire cages to a chunk of chain link fence laid on the ground).

However, if you encounter an injured turtle there is still a way to help. The Ontario Turtle Conservation Centre in Peterborough has an incredible track record of repairing and rehabilitating injured turtles. And some of these patients come in looking really rough!

Call them at 705-741-5000 to arrange for immediate transportation of the injured turtle from where you are located to the Peterborough turtle hospital. There is an ‘army’ of volunteer drivers waiting to be turtle ambulance drivers.

Even a dead turtle should be reported, as if the death is very recent there may be fertile eggs that can be salvaged from the body. The eggs are incubated at a carefully monitored facility and the young turtles are later released back to the site where mama met her end.

As I said, it’s June and that means turtles… everywhere! Keep your eyes open and your right foot near the brake pedal.