Volunteers return to plant trees in Innisfil this spring 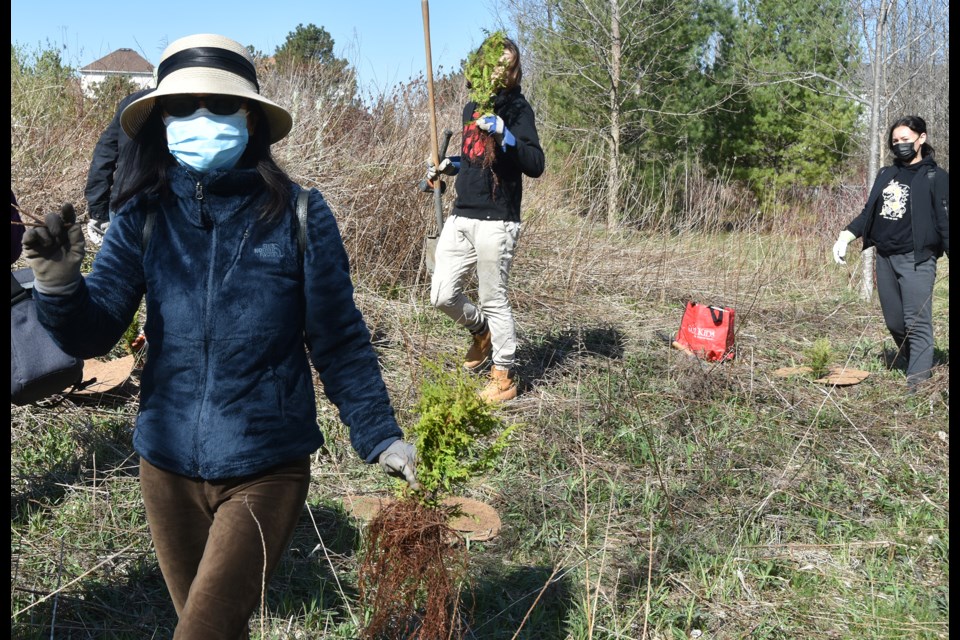 Volunteers came out on a sunny day to plant trees, under the guidance of the South Simcoe Streams Network. | Miriam King, Freelance

On Saturday morning, two groups of volunteers came out to plant a total of 400 native trees and shrubs around two stormwater retention ponds in the Leonard’s Creek wetland area of Alcona.

A total of 64 volunteers participated, including 59 from the community, such as the 2nd Innisfil Scouts, local families, students from five Simcoe County high schools, and a large contingent from the Simcoe County Chinese Association.

The SSSN team visited both sites before planting day, laying out locations for the trees, and delivering supplies – shovels, mulch mats to suppress weeds and give the young saplings a better chance to grow, stakes and spiral tree guards to protect the trees from hungry deer and rabbits.

Bill Train, a volunteer with the South Simcoe Streams Network team for the past 15 years, assisted a group working near Jans Boulevard.

Once the trees were planted, the group also planted red osier dogwood and highbush cranberry, native shrubs that provide food for wildlife, he noted.

Train explained the retention pond is in an area within the Leonard’s Creek watershed which drains into Lake Simcoe. That means that, in addition to restoring natural habitat, the tree-planting will reduce runoff and contribute to improved water quality, in both the creek and the lake.

A smaller group, including a number of Scouts, planted trees around a smaller retention pond off Leslie, near Adullam.

Among the volunteers digging holes, planting maples, tamping down the soil and adding a mulch mat was Coun. Ken Fowler and son Gabe, who shared his enthusiasm and newfound planting expertise with other volunteers.

Pedrazzi noted that while the stormwater ponds did receive some plantings after they were built, “there were unplanted areas, providing the opportunity for urban planting near the creek to enhance the treed buffer.”

Leonard’s Creek is one of 11 primary streams and several smaller creeks that flow from the upland agricultural areas in the west, eastward through lowland sand plains before draining into Lake Simcoe, she explained.

“Leonard’s Creek is a cold-water stream that also traverses through a significant wetland complex known as the Leonard’s Beach Swamp,” Pedrazzi said. “Improving the tree canopy along its corridor, which includes the storm ponds, will help offset some of the warming influences as it flows through urban Alcona, and adds to the urban treed corridor that helps to sequester carbon,” fighting climate change in addition to improving local conditions.

She thanked the volunteers, the Town of Innisfil for providing staff support, and the Dufferin Simcoe Land Stewardship network through the County of Simcoe Tree Program and Ontario Trillium Foundation through the Connecting Communities and Creeks Project, for funding.

Community tree-planting events are scheduled May 14, 15 and 28, along stretches of the Nottawasaga River.

For more information about these and other plantings, contact Silvia Pedrazzi by email at silvia@nottawasaga.com or call 705-440-9129.