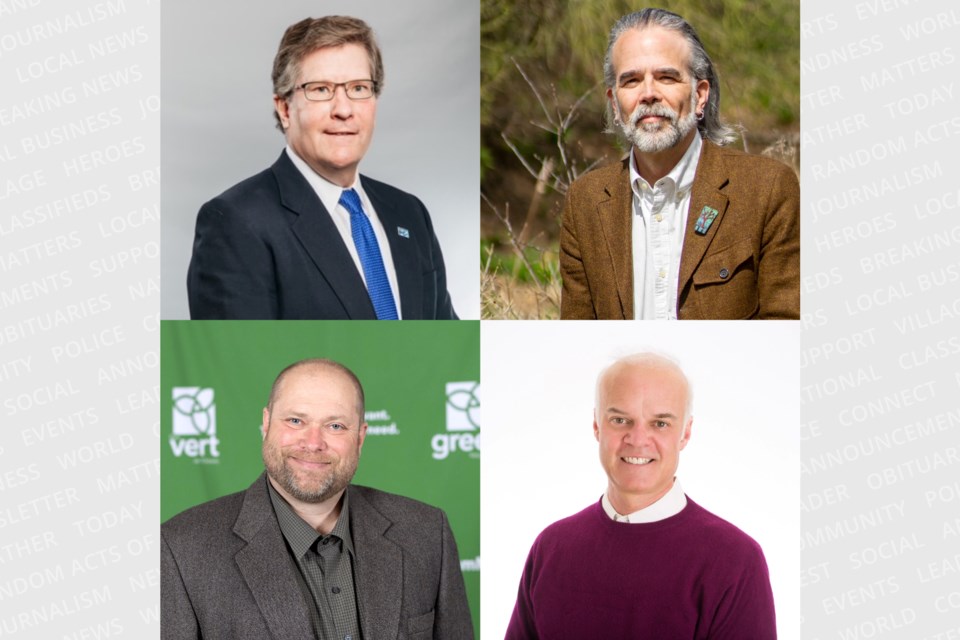 Clockwise from top left: Brian Saunderson for the PCs, Keith Nunn for the NDP, Ted Crysler for the Liberals, and Allan Kuhn for the Greens. | Contributed photo

We asked the four main provincial candidates in Simcoe-Grey a series of six questions via email. The following responses were submitted by the candidates and/or their campaigns. The answers have not been checked for accuracy; they represent the candidates’ platforms and opinions. External links have been removed.

The Simcoe-Grey riding is located directly west of Barrie and includes Essa Township.

Voting day is June 2 and advance voting is open until May 28.

Q: The last government was criticized for the number of times it used a Ministerial Zoning Order (MZO) to allow a development to go ahead. In Collingwood, there are two large projects asking for town support for an MZO, which bypasses public engagement and the re-zoning process normally undertaken by municipalities. There are also many developments in Collingwood that have appealed to the Ontario Land Tribunal, which has the potential to bypass town planning processes and public engagement depending on the decision of the unelected, non-local tribunal. What role do you think the province should be playing in local planning matters, and what protections, if any, should be added to local municipal planning authorities?

Keith Nunn, NDP: Doug Ford has used municipal zoning orders to override the planning rules in several cities and towns in order to secure large development contracts for his buddies. He has forced several cities to change their municipal boundaries in order to develop farmland and green space, despite residents and local councils voting against it.

We will restore integrity to the land use planning process and end the abuse of Minister’s Zoning Orders, while revoking MZOs that harm the public interest. We will reform the Ontario Land Tribunal to limit appeals of municipal decisions only to matters of law, while making sure that provincial planning policies and environmental protections are respected.

Ted Crysler, Liberal: Communities need a voice in planning decisions, and a Liberal government would support them having that voice.

With deep roots in this riding, I am committed to listening and making our voices heard.

The fact is, MZOs should not be used to override local planning.

Under a Liberal government, we would scrap MZOs and replace them with a new rules-based system limited to critical provincial projects only, such as new not-for-profit long-term care homes, affordable housing, or major employment developments. Restrictions would require open consultations with affected local groups and have judicial review of decisions. This would ensure they align to environmental protections, and instead of developers determining the future of communities, the community itself should be taking that action.

Allan Kuhn, Green: MZO’s should be the exception, not the rule. Planning and Conservation Authorities need to be able to have the authority to do their job. When so many local decisions are overturned for developers it shows a bias towards wanton growth. If we are to survive the next few generations we need to preserve what we have by empowering local authorities to disallow for sprawl. We need to restore the Office of the Environmental Commissioner. Rapidly repeal all recent changes that limited conservation authorities authority and provide stable funding mechanisms so Conservation authorities can fulfill their mandates, including watershed level protection. We need to reverse changes in Bill 245 that merged all land use planning tribunals, including the Environmental Review Board, into the Ontario Land Tribunal, and reverse damaging changes to the local Planning Appeal Tribunal. Having a veto against ecology is too much power in the hands of the profit driven. It isn’t superfluous red tape if it protects the future of our children. Environmental Health = Community Health

Brian Saunderson, PC: To be clear, in every case where a Ministerial Zoning Order (MZO) has been granted by the Progressive Conservative government, it has been at the request of the local municipality.