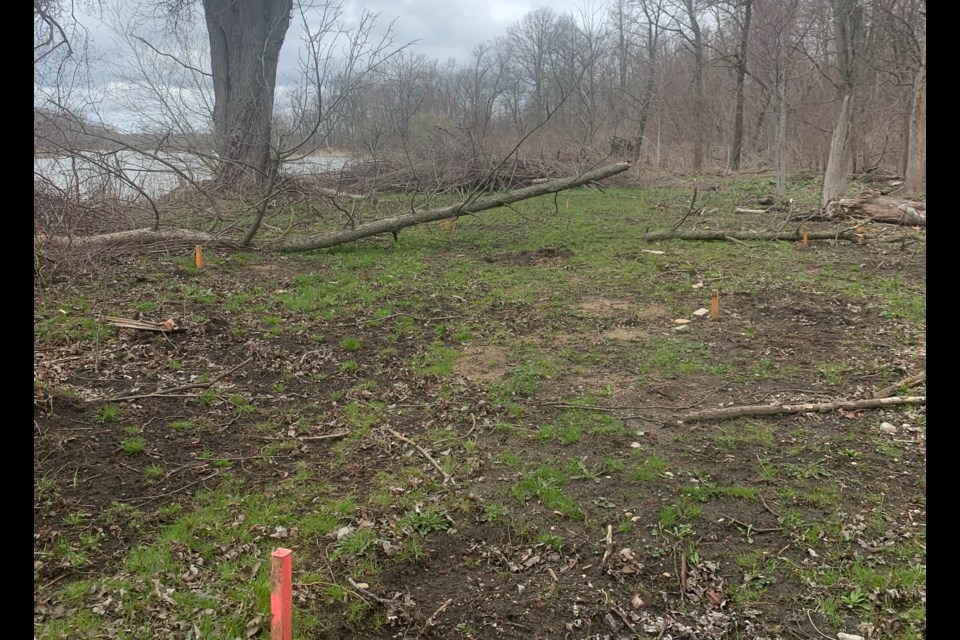 This is an area near the Holland River, just below Cooks Bay. The orange stakes indicate an archeological survey. | Supplied Photo

In 1812, the Ogemaawag (Oh-geh-maw-whag) Chiefs of the Anishinaabeg (Ah-nish-in-aw-behg) Ojibwe, along with their warriors canoed into the bottom end of Lake Simcoe into Cooks Bay and down into the Holland River. The river was deep and much wider than what we see today. The water, still pristine, held their canoes aloft as a slight breeze whispered their arrival to the lush green forest.

The Anishinaabeg have come to a staging area where the British military have assembled soldiers. The Anishnaabeg and the British will engage in a few days of planning, preparation and ceremony. Then, they will move further south from here and join other Indigenous Nations allied to the Crown to protect their lands from annexation by the United States at Niagara and Fort George.

On a cool windy morning last week, I visited that same area where my ancestors once made tracks. It is the 27th of April, 2022.

The clouds pass quickly overhead, sailing on the cool spring bluster, billowing like the white sails of the tall British ships of 1812. There is 210 years difference between my visit and those of my ancestors; the chiefs and warriors who fought alongside the British to prevent the fledgling state of Canada from falling into American hands. I am here to speak to those ancestors by conducting a pipe ceremony.

With me on this day is Bill Foster, who resides in the area. He is accompanying me to show me where the Ontario government will construct a new highway, the Bradford Bypass.

Bill tells me about how he is concerned for the wildlife in the area should this development go through as proposed. He tells me he has a website, frogs.ca, which chronicles his involvement and concerns.

He is very animated as he tries to have me understand as much information as possible during our walk through his neighbours’ property to the proposed site, which sits on the banks of the Holland River.

On a small pathway leading to the river, we are directly beside a forested wetland. My Indigenous eye begins to see things in the forest: things that I have come to learn are no longer in the purview of the non-Indigenous community. I see natural medicines. I see connections to my ancestors in those medicines. They aided in their survival here when this forest was far lusher.

Off to my left is a stand of black ash trees. I marvel upon observing that they are still untouched by the invasive emerald ash borer. The leaves of these trees carry the same medicine as aspirin and could be used as a treatment for headaches if one were to ingest the stem of the tree leaf.

To my right along the route reaching out from the wetland is the Red Osier Dogwood, a friend of the Anishinaabeg that helped us to reduce the effects of a fever. I also see a tall White Pine whose needles contain vitamin C and could ward off colds if consumed daily. The gum was used as the main ingredient to create a glue which kept our birch bark canoes waterproof.

Further along the route, a pileated woodpecker hollows out a tree in search of larvae and, as it does, it is creating living spaces for the influx of summer birds which will call this forest home. It is still warm enough to see frogs peering from below the waterline in this wetland. Their ancestors probably knew mine.

As we near the edge of the Holland River, I see two enormous turkey vultures overhead which is a good indicator that the circle of life and dying is very much evident here at this place.

My host and I stop to take in the scenery for a moment. Then Bill points out an archeaological survey that had been completed in 2021 on the ground beneath our feet.

He tells me of how this place was once a bustling centre for steam boat operators and how some of the first non-Indigenous settlers found cannon balls along the shore and pottery shards and stone tools, including spear heads, belonging to various Indigenous First Nations dating back thousands of years.

I lay the pipe onto the ground and explain that this is not my pipe. It belongs to the people and my role as a pipe carrier is to perform ceremony on their behalf. I can never claim the pipe as my own. I explain to Bill Foster that I will carry out a ceremony and during that ceremony I will ask the spirits of my ancestors to guide me and give me a glimpse of what had been here.

The ceremony is old, almost as old as the ground below me. When I am in ceremony I become another part of that ceremony. I connect spiritually to all things around me. And I am given gifts of knowledge.

In this ceremony, on the shores of the Holland River, I saw the river as it once was. The banks were wider. The remnants of those banks are still there today. Dormant. Waiting to once more hold the clean pristine water that it once held. Water has memory and it will return to this place once more.

I see my ancestors camped along these shores. They used everything around them including the leaves of the Cattails which they tied around the bottom of their Wiigwaams (Weeg–wawms) homes, so that the warm summer air could waft through.

I see that this place was a place of trade and many Indigenous Nations gathered here. It was neutral ground and no wars were fought here. It was known as Odenaang (Oh-deh-nawng), the Place of the Heart. It was where people would gather in large numbers without conflict and be of the heart. And it had been this way for thousands of years. It was a link to northern routes.

I see burial sites of my ancestors and those from other Nations. The campfires still burn along these shores. If you close your eyes you could smell the smoke. Peace still prevails along this place of the heart.

When I came out of ceremony, I saw that we had been joined by squirrels, crows, blue jays, and robins. They sat perched high in the trees partaking the spirituality of the moment. My host, Bill, was overcome with emotion from having experienced an awakening of sorts.

As a boy I had been told of how the Anishnaabeg had been here since just after the G’chi Bboon (Guh-chih Bih-boan), the ‘Big Winter’. The ice age. We called this river Mizizizaagiing (Mih-zihz-zaw-geeng), the river that goes everywhere. It had been Anglicized to Micicaquean (All meaning was lost in translation).

The people who lived along its banks were the Mizizaagiig (Miz-zihz- zaw-geeg), anglicized as the Mississauga. The river received its English name from John Graves Simcoe, the first lieutenant governor of Upper Canada who travelled there in 1793. Before then it had been known as the “Indian Landing” for all of the traders that paddled through this important hub.

I will forever be baffled at how the Ontario government would choose to pave over and develop what was once an important link; not only for Indigenous people but the settler community as well. This landing was the gateway to the north. It had already suffered an indignity by diverging the flow of its once pristine waters with dams and irrigation. Anishinaabeg wonder if Ontario is looking to finish it off.

The legacy, the footprint, stamped on grounds of this important part of history is imminently endangered now. Endangered by the same allies that my people had fought alongside to protect the lands on this Odenaang. This Place of the Heart.

Jeff Monague is a former chief of the Beausoleil First Nation on Christian Island, former treaty research director with the Anishnabek (Union of Ontario Indians), and veteran of the Canadian Forces. Monague, who taught the Ojibwe language with the Simcoe County District School Board and Georgian College, is currently the superintendent of Springwater Provincial Park.