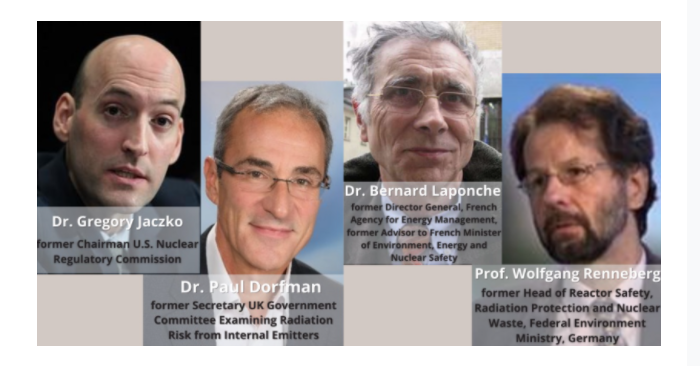 Why nuclear power can never be green The world must ponder whether it is worth tackling the poison in the air that is carbon by spreading poison all around us, in air, in soil and in water — because that is what will happen if we go full-tilt for nuclear energy.

Nuclear Power Doesn’t Belong in the Green New Deal The nuke industry advertises itself as “zero emissions,” “carbon-free” and even “renewable”. But nuclear power is none of these things.

Small modular reactors offer no hope for nuclear energy The belief that SMRs will help solve the energy crisis is grossly optimistic and diverts money and resources away from the options that can address climate change at low cost and in a timely manner.

New Radioactive Waste Plan Poses ‘Millennia of Risk’ for Ottawa River Communities Canada’s nuclear regulator is about to hold hearings on building a controversial 60-foot-high mound for one million cubic metres of radioactive and hazardous wastes, with the potential to leak for millennia into the Ottawa River.

Why is support for nuclear power noisiest just as its failures become most clear? Some gov’ts and mainstream media think we need nuclear to avoid the worst climate change. They’re wrong – so why aren’t we hearing that?

Guess Who’s Leading the Charge for Nuclear Power in Canada? Small reactors make no economic sense, despite the boost by Alberta Premier Jason Kenney and lobbyists.

Ontario Power Generation is irresponsible to consider another nuclear reactor The environmental and public risks – along with costs to the taxpayer – are too high, and it will also detract from mitigating climate change.

Local opposition to nuclear waste storage sites grows The Nuclear Waste Management Organization is down to two finalists in its search for a long-term storage site for high-level nuclear waste – the Municipality of South Bruce, in S. Ontario near Lake Huron, and the Township of Ignace, in NW Ontario near Kenora. But local opponents have emerged in both regions.

Switching to an air-source heat pump can cut your electricity costs by more than $2,000 a year and you will be slashing the greenhouse gas pollution that results from heating and cooling your home at the same time.

Germany spells out ‘gigantic’ effort to cut emissions and boost renewables To meet its 2030 climate targets, Germany plans to focus on expanding renewables capacity, with the aim of doubling their share in the energy mix to 80% by 2030.

“Base load” power: a myth used to defend the fossil fuel industry

Nova Scotia aims to be powered by 80 per cent renewables in 8 years Burning coal for electricity will be phased out in Nova Scotia by 2030 and renewables are setting the stage to power the province’s future.

Stop the Disposal of Nuclear Waste in NW Ontario High-level nuclear waste should be managed using a “rolling stewardship” concept, rather than abandoning it in a deep geological repository. Learn more. Make a donation to help local organizers educate their neighbours.

Residents of South Bruce, ON deserve a referendum on whether or not they want to be Canada’s nuclear waste dump.

Say no to nuclear waste in Labrador The citizens of Newfoundland and Labrador do not want to be the nuke waste dump for the world.

Say no to new nuclear in the GTA Tell Ontario’s political leaders that you want investments in wind and solar energy, not a new GTA nuclear reactor.

Decommission the Pickering Nuclear Station immediately after shutdown in 2024 This would provide a jobs transition for the workers and would reclaim the Pickering waterfront.

International Petition Against the Discharge of Contaminated Water from Fukushima into the Sea And here’s another.

Energy Democracy and Empowerment Wed. Jan. 19, 1:15 p.m. ET. How do we reorganize the energy system to empower communities?

Students Against Nuclear Weapons Sat. Jan. 22, 1 p.m. ET. This virtual forum focuses on the humanitarian implications of the renewed nuclear-arms race and the potential of the United Nations’ Treaty on the Prohibition of Nuclear Weapons to build a world free of the menace of nuclear war. Elizabeth May and Ray Acheson are the keynote speakers.

Nuclear Colonialism in the Age of the Ban Treaty: from New Mexico to Marshall Islands and across the Pacific Tues. Jan. 25, 1 p.m. ET. Speakers and artists of affected communities and allies will weave together the history of nuclear colonialism from uranium mining, nuclear testing, production and use — to the deadly waste that will be with us for generations to come.