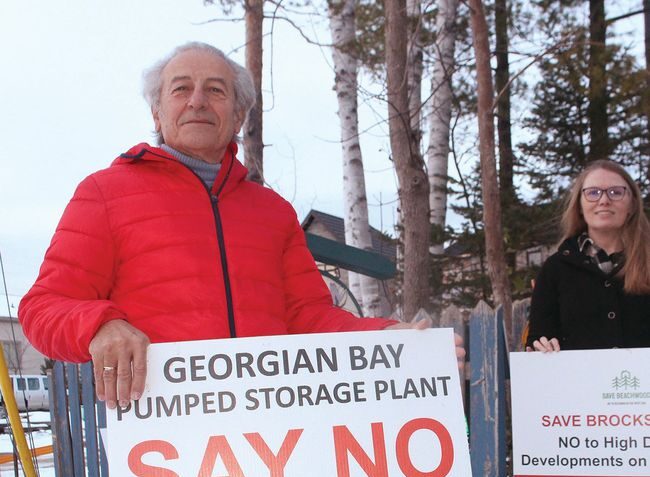 Gerard Dusastre (left) and Kerrie Atkins are part of a group of neighbours who came together in 2021 to challenge two projects in their quiet residential neighbourhood in the west end of Wasaga Beach.  IAN ADAMS/METROLAND

Gerard Dusastre had no intention of resting in retirement.

He left the working world in early 2020, at age 69, after a career in marketing and sales — the last two years of which were spent in information technology.

Dusastre wasn’t about to put his feet up on the back deck of the Shore Lane home he moved into seven years ago and watch the waves on Georgian Bay.

“I need to be engaged,” he said. “I’ve been passionate about politics since I was a young student.”

But he never imagined that by the middle of 2021, he would be entangled in two significant issues in his neighbourhood.

The first, an application at one end of the street to rezone a piece of R-1 and environmentally protected property to allow a high-density residential development; at the other end, news that a section of the shoreline had been purchased by a company proposing to build a stored-energy facility at Meaford. The company wants to run a transmission cable that would connect with the province’s electricity network.

Both matters have galvanized the neighbourhood, and the opposition to the residential development has evolved into the ratepayers group Save Beachwood.

Neighbour Kerrie Atkins is also committed to researching zoning and official plan policies. Atkins and her partner only moved to the area several months ago as a lifestyle change.

“We had five months to enjoy our property, and then we’re thrown headlong into this,” said Atkins, whose property backs onto the land slated for residential development.

Her partner built the website for the Save Beachwood group (www.savebeachwood.ca), and the couple got involved with community outreach.

“Everything was all-encompassing, all the research that went into it,” Atkins said.

“We had no expertise on … the local official plan and bylaws, so we had to definitely do a lot of research in order to be able to understand what was happening, what was the process,” Dusastre added. “There is a lot of information to digest.”

The group has also had to weather the social media storms. Atkins said there definitely seems to be a “clear line” drawn in the community.

“I think the story is changing, but definitely there was a lot of opposition on social media to the point where one of my comments was flagged to my employer,” she said. “People that have never been to this neighbourhood, have no clue where this neighbourhood is, are like, ‘Build it, build it.’

“I’ve been called NIMBY a zillion times. I totally don’t care, but it’s the one thing that’s strange.”

On the other hand, the community activism has provided a conduit for neighbours to connect and know each other.

“In Toronto, I never knew my neighbours,” Atkins said. “I’ve gotten to know basically everyone on this road.

“There are divisions, but it’s great that you can walk down the street (and talk to neighbours) — it’s been super positive in that respect.”