Home » Community news » The Canadian town of Tiny has the world’s purest water. A gravel mining operation could ruin it

The Canadian town of Tiny has the world’s purest water. A gravel mining operation could ruin it 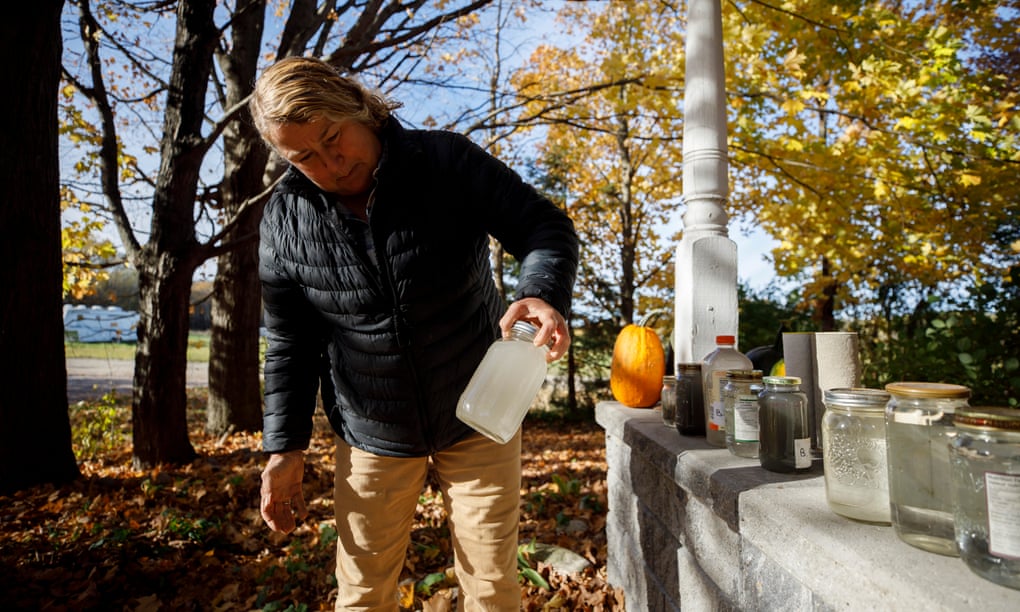 Bonnie Pauzé says the water from her artesian well is ‘some of the best stuff on the planet’. Photograph: Cole Burston/The Guardian

The people of Tiny and neighboring First Nations are fighting the expansion of the quarry pits to keep their water pristine.

Some of cleanest water in the world fell to the ground about 70 years ago, passing through smoggy skies that stuffed the droplets full of ash, soot, vehicle exhaust, chemicals and heavy metals.

It percolated through gravel, glacial silt and permeable rock and eventually gushed from a hose and into a pitcher held by Bonnie Pauzé.

The water shimmers in the morning sunlight as she pours a glass. “This is some of the best stuff on the planet,” she says, taking a gulp.

Moments later, she holds up a jar of turbid water. “And this is what it looks like when the companies start washing gravel.”

After years of careful analysis, scientists believe the Ontario townships of Tiny and Tay – just an hour and a half north of Toronto – have some of the purest water on the planet.

But the quirk of geology believed to have produced this water is also coveted by gravel mining companies, which have announced plans to expand operations. In recent months, the region has found itself at the centre of a mounting conflict, pitting the preservation of the water supply against the growing power of resource extraction companies.

Gravel quarries have operated in the area for more than a decade, but residents fear a planned expansion could prove disastrous to the region’s groundwater. The new 13.5-hectare Teedon Pit quarry atop French’s Hill – the towering mass of silt, gravel, alluvial soil and trees that scientist believe is the secret to the area’s pristine water – would see the soil and gravel layer stripped away by heavy machinery and trucked off to feed the construction boom in large cities. 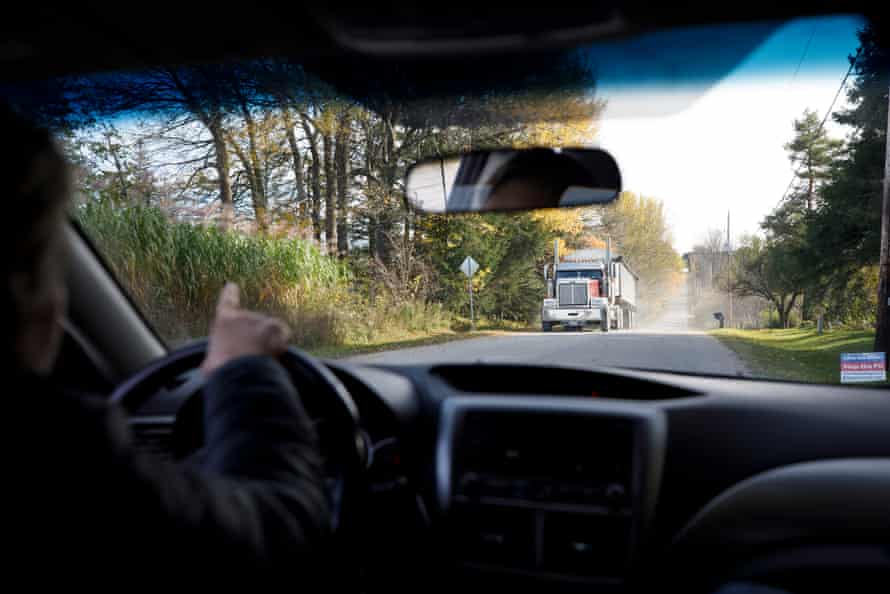 Since 2009, Pauzé has collected samples in mason jars, documenting changes to the water that she and other residents say dovetails with the expansion of mining in the area. Some samples contain tiny flakes of silt suspended in water; others turn inky black when shaken.

A hydrogeologist commissioned by Pauzé and her husband, Jake, shares their belief the water-intensive process of washing gravel is responsible for intermittently tainting the groundwater with silt. That claim is disputed by the province’s ministry of environment, which suggests she has problems with her well. 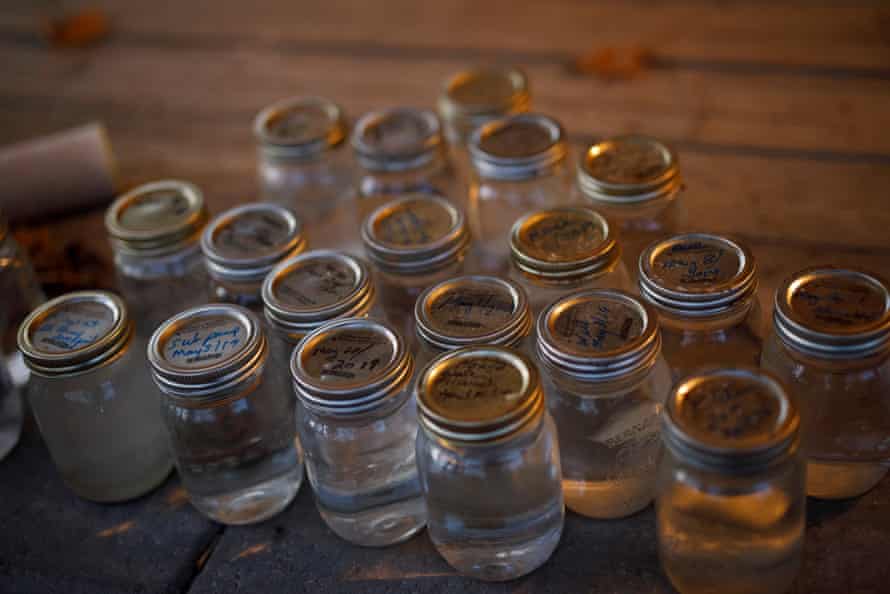 In a statement to the Guardian, Dufferin Aggregates, part of Dublin-based CHG, said all operations “are conducted in line with all legal and environmental compliance requirements, including minimising water use through reduction, reuse, and recycling measures wherever possible”.

But such certainty is misplaced, said William Shotyk, a geochemist at the University of Alberta, whose family farm sits in the shadow of French’s Hill.

“The world’s leading authorities don’t fully understand the water,” said Shotyk, the first scientist to quantify the purity of the water. “And yet, we have aggregate companies saying they won’t affect the quality of the water.”

Until recently, the purest water in the world was believed to be that trapped thousands of years ago in Arctic ice. But in 2006, Shotyk and colleagues discovered water from his farm had a lead concentration five times lower than Arctic core samples – a result he still finds mind-boggling. At the time, there were only a handful of facilities in the world that could measure a lead concentration so low.

Today, Shotyk has a carefully designed facility to better understand the water. Researchers from all over have travelled to his small cabin to take samples. The team washes the equipment in acid, uses polypropylene plastics and have enclosed the spigots in glass cases to ensure ambient air doesn’t contaminate the samples. Subsequent testing has found the water has incredibly low concentrations of chloride and is devoid of any organic contaminants from nearby farms.

John Cherry, a leading expert on hydrogeology and founder of the Groundwater Project, speculates it could be a mixture of Pleistocene-era water trapped in clay deposits, as well as rainwater filtered down from French’s Hill and trapped in a handful of artesian aquifers, like on Pauzé’s farm. But he fears the ecosystem could be altered before scientists can fully understand the phenomenon. 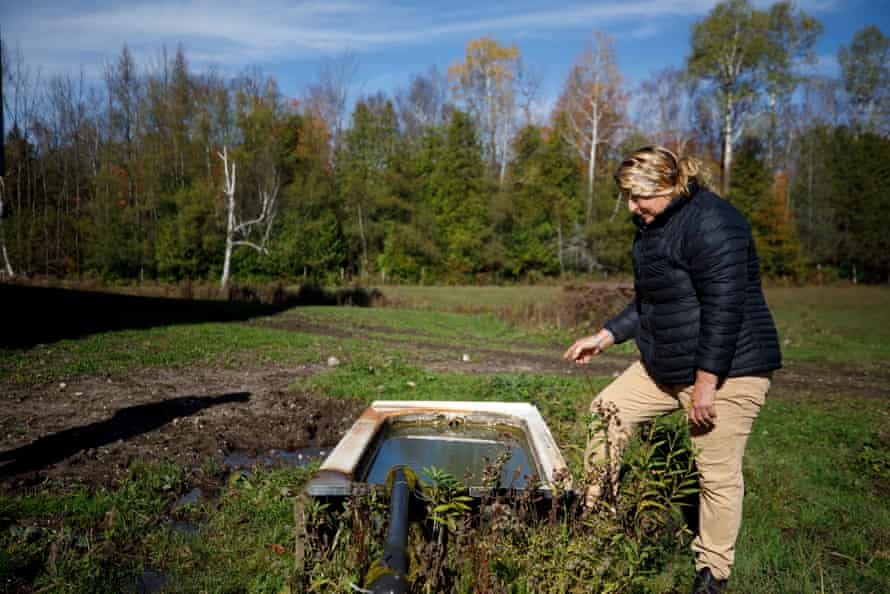 “The last place that a civilized society should be doing aggregate mining is an area where the most pristine waters are found,” he said. “A lot of what we do that’s stupid – and aggregate mining on top of pristine water is quite stupid – is because groundwater suffers from more ignorance than any other of the water resources – [because] we don’t see it.”

With so many unknowns surrounding the groundwater of Tiny and Tay, scientists are pleading for five years to study the water and surrounding ecosystem before quarry expansion begins.

“We’re told that Canada has more freshwater per capita than any other country in the world and that we live in this wonderful freshwater haven. Water is cheap and so it’s very rare that we actually do anything as a society to protect our water resources for the future,” said Cherry.

Residents in the area have won previous fights. In 2009, the 50-acre (20-hectare) Site 41 landfill was scrapped after widespread public opposition, a victory made possible only with help from neighbouring First Nations. 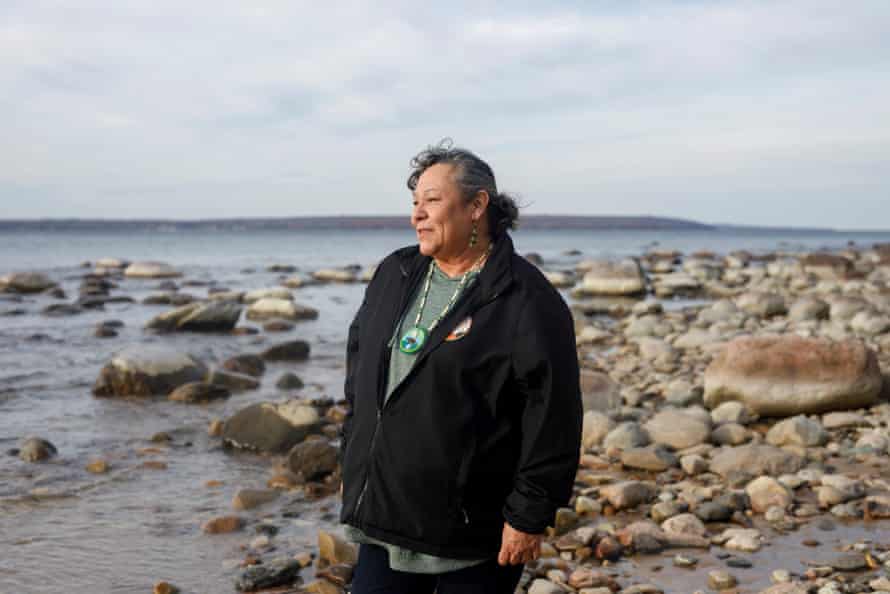 Those Indigenous communities are now closely watching the fight against gravel quarries – and preparing for another battle.

“I do this for my grandchildren,” said Beth Elson of the nearby Beausoleil First Nation. “Knowing they’ll need clear water is plenty of motivation. Water is just part of us. And it’s to be looked after.”

Elson was a central figure in the fight over the failed landfill project, and travels often from her home on the pristine shores of Georgian Bay to perform water ceremonies in the area.

“You lift the water, you say prayers and sing songs and honour the water. We give some to Mother Earth, some to the fire and then we pass the water around. Everyone has a little taste to help us all connect.”

But she worries that this battle feels different from Site 41.

“I don’t know when [Indigenous peoples] will get to play our part in here … As neighbours, we’re just watching, but we’re often called on at the 11th hour,” she said. “We should have been blocking roads right off the bat. Not waiting until they’ve dug the holes. We should have gone in right when the first tree was cut.”

Pauzé says the faltering momentum of the fight, worsened by public health restrictions, has demoralized the community. 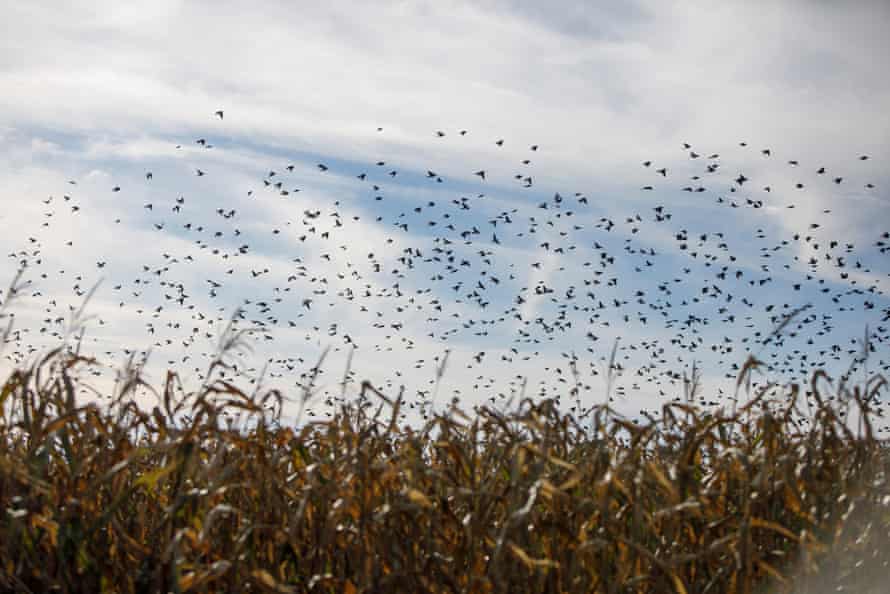 A murmuration of starlings fly by a cornfield in Tiny, Ontario. Photograph: Cole Burston/The Guardian

On a fall afternoon, walking beneath the maple, beech and hemlock stands that blanket the top of French’s Hill, Pauzé and local resident Kate Harries listen to the chatter of grackles swarming overhead – and the distant hum of the aggregate operations in the distance.

“We just want a pause on all this to really know what’s at stake,” said Pauzé. “We want to know why this water is so special.”

“If only for the history books.”

Watch the documentary on the purest water known to science. It aired on CBC’s the National on November 25 2021.

Among those who spoke to the National:

“Once it’s gone, it’s gone” – Michael Powell, of the University of Alberta, one of the scientists working to get a five-year project to study this pristine water. “We’re saying that this is a place that is unique on the surface of the earth as far as we know.”

Resident Bonnie Pauze: “We should be celebrating that (water), not fighting to protect it.”

Beausoleil First Nation elder Beth Brass Elson: “They’re washing gravel with the purest water and yet they can’t even look after our First Nations in the north that don’t have good drinking water? Nothing makes sense any more. Nothing.”

One Response to “The Canadian town of Tiny has the world’s purest water. A gravel mining operation could ruin it”