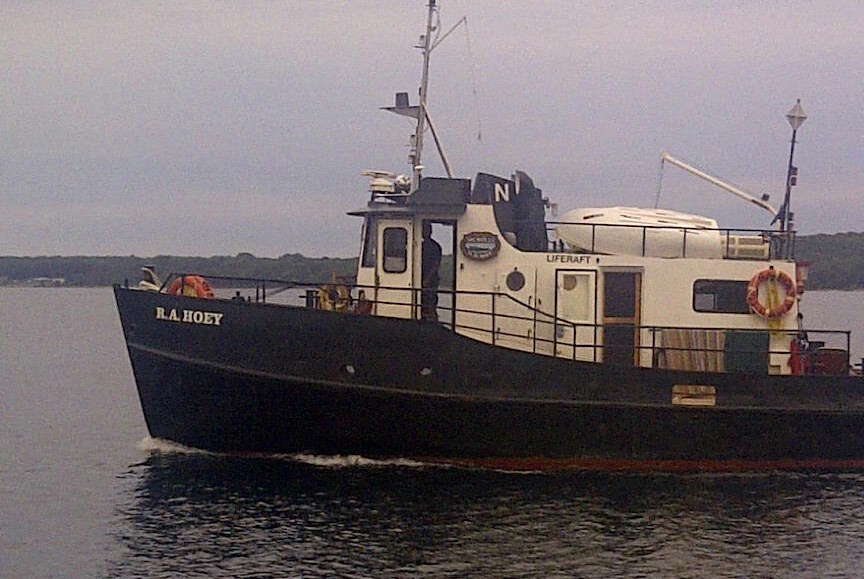 From 1961 through to 1985, a small tugboat, the R.A. Hoey, was in service as a passenger ferry and sailed the channel daily between Christian Island and Cedar Point on the mainland.Supplied Photo

It’s November and the winds have shifted and they now prevail almost daily from a north-westerly direction. At this time of year, I am reminded of Orillia’s own, Gordon Lightfoot, the legend, and the lyrics from his iconic The Wreck of the Edmond Fitzgerald: “Does anyone know where the love of God goes when the waves turn the minutes to hours?”

Back when the tragedy of the Edmund Fitzgerald occurred (Google it, download it, add song to playlist) that particular lyric from that song spoke to me, as I lived that lyric in real life whenever the gales of November came early.

On Christian Island, Georgian Bay (another Gordon Lightfoot reference), we all did.

From 1961 through to 1985, a small tugboat, the R.A. Hoey, was in service as a passenger ferry and sailed the channel daily between Christian Island and Cedar Point on the mainland.

This small ship proved almost unsinkable and it needed to be, as a tight schedule sanctioned by the Department of Indian and Northern Affairs Canada (at the time) meant that it had to be strictly adhered to by the boat captains.

The small tug was 50 feet in length and could transport approximately 35 passengers. And it did, through all types of weather. Wind, thunderstorms, even blizzards as the tiny vessel fought to break ice in an attempt to keep the 3.5-kilometre channel open. This channel was then, and it still is today, the lifeline of the community.

When I was a teen attending elementary and high school in Midland, my schoolmates and I would board the R.A. Hoey at 7:30 each morning for our trip to Cedar Point. The winds would often blow through the channel at 60 to 100 km/h at this time of year.

The rides there and back were often harrowing as the little tug was tossed about the surface like a small cork. It took great skill by the captains back then to keep her upright as we, the passengers, held on.

And riding eight- to 10-foot waves does indeed make you wonder where the love of God goes. I remember well cresting one of these giant waves and feeling weightless, suspended in air for a moment — though it seemed like hours — before we would suddenly drop to the bottom before being lifted and the whole process would be repeated over and over.

The R.A. Hoey was named for the bureaucrat who signed the paperwork which sent our parents to residential school. It was only fitting that we would have to risk our lives to attend school aboard his namesake.

Collectively, we spent many hours aboard that little boat. The feeling one gets from cresting monster waves is a feeling of surrender.

You turn your fate to the able hands of the ferry captains and I will forever be thankful for their skill and mastery of these waters. And when they finally made that last turn from those November gales we would sail safely into the calm that is the lee of Christian Island.

Jeff Monague is a former chief of the Beausoleil First Nation on Christian Island, former treaty research director with the Anishnabek (Union of Ontario Indians), and veteran of the Canadian Forces. Monague, who taught the Ojibwe language with the Simcoe County District School Board and Georgian College, is currently the superintendent of Springwater Provincial Park.