Home » Community news » Critics call it ‘unnecessary’ and ‘excessive.’ Watch how these RCMP arrests on Wet’suwet’en territory went down

Critics call it ‘unnecessary’ and ‘excessive.’ Watch how these RCMP arrests on Wet’suwet’en territory went down 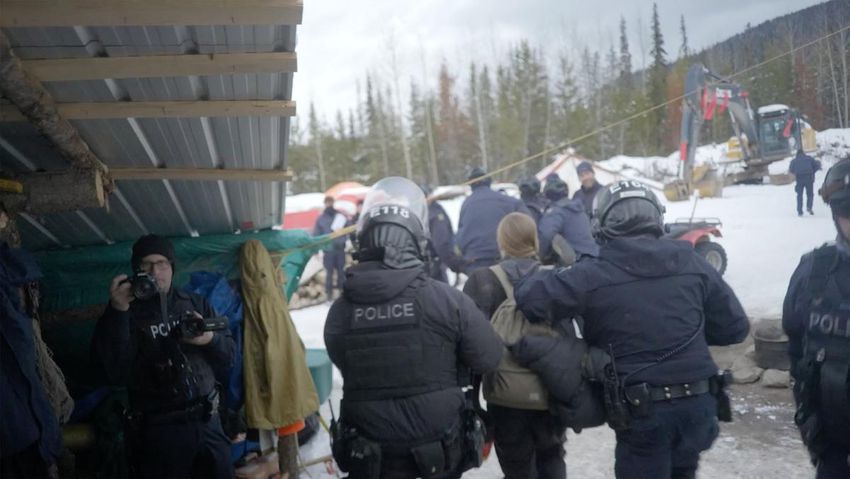 Footage of the RCMP raiding a camp and arresting Wet’suwet’en opponents of a 670-kilometre natural gas pipeline in Northern B.C. last week.

Warning: Some may find video contents and language disturbing.

VANCOUVER—Newly released footage taken by a filmmaker as the RCMP arrested him, another journalist and pipeline opponents is shining a spotlight on the methods used by Canada’s national police force on Wet’suwet’en territory last week.

On Wednesday, Michael Toledano, released video he had taken in the moments before his arrest late last week. He and photojournalist Amber Bracken were among those subsequently held in custody over the weekend before being released Monday on conditions.

The video shows the use of firearms, a police dog and a chainsaw during the arrests — measures that prompted Tom Engel of the Criminal Trial Lawyers’ Association to question the RCMP’s actions in the latest chapter of a dispute that has been raging for years and drawn international attention.

“You combine the canine, you combine all these police officers and then you combine the guns being pointed and the way the (emergency response team) is dressed,” said Engel, the chair of the association’s policing committee. “This is all a show of force and therefore it’s a use of force.

“And it just seems to be unnecessary to me and excessive.” A video from filmmaker Michael Toledano, shared with media outlets including the Star, appears to show RCMP as they raid a camp and arrest Wet’suwet’en opponents of a 670-kilometre natural gas pipeline.  YINTAH FILM SCREEN GRAB

At the heart of the pipeline dispute are hereditary Wet’suwet’en chiefs and their supporters, who have been trying to stop the construction of the 670-kilometre pipeline meant to carry natural gas across northern British Columbia. They say Coastal GasLink, the company building the pipeline, has no right to proceed because the project was not approved through traditional government systems. Elected chiefs have supported the project, and a B.C. court has issued an injunction against those seeking to interfere with the project.

The new video, which Toledano provided to news outlets including the Star, appears to show the inside of a structure at the pipeline opponents’ coyote camp as the RCMP arrive on the scene last week.

The video begins with police circling the hut.

“This is a private residence and you are trespassing, you need to leave now,” camp spokesperson Molly Wickham says through the door to police on the other side, who are threatening to arrest those there under the authority of a 2019 court injunction meant to prevent disruptions to the pipeline construction.

Moments later, pieces of the door fly into the room as RCMP begin to hammer it down. A police dog is heard barking outside.

An officer in tactical gear can be seen through the door pointing a rifle at those inside.

“Get your f–ing gun off me!” Wickham yells just before police fire up a chainsaw to finish breaking through the door. Those inside do not put up a struggle.

Toledano and Bracken clearly identify themselves as journalists during the arrests.

Toledano had been working on a documentary the CBC had commissioned for The Passionate Eye. He said Wednesday that watching the video now is traumatizing for him and others, adding it shows an “excessive display of force” by the RCMP.

“The use of axes and chainsaws to breach the doors, the presence of dog teams, the presence of assault weapons, the manner in which we were surrounded,” Toledano said. “It all points to a very aggressive and punitive response by the RCMP that is meant to scare people out of both resisting fossil fuel projects but also lawfully documenting the actions of police.”

Engel, of the of the Criminal Trial Lawyers’ Association, reviewed the footage at the request of the Star.

He raised concerns around the use of the chainsaw to breach the hut, the use of carbines by the RCMP’s emergency-response team in tactical gear, and the dog barking in the video. Even if they were allowed to use force to enforce the injunction, and could justify its use, “it’s a bad image for the RCMP,” he said.

Engel said that the officer at the door after it had been breached is holding his carbine in the “low-ready” position. That means not at the ground or right at someone’s chest, but it is held in a way that makes it “ready to raise and fire.”

“I don’t see any justification for pointing those firearms unless they had some reason to believe that the people inside were armed with firearms,” said Engel.

“Pointing a firearm at somebody without justification is a criminal offence.”

It wouldn’t be safe for the officers to stand directly outside the door, as they are in the video, if they believed the people inside did have firearms, Engel added.

Additionally, Engel said the use of the chainsaw was “risky” given that police officers typically have a ram with them to take down doorways.

“What if they hit a nail or something and it comes flying off and blinds somebody?” he said. “They could have just rammed it in, I mean, this is not a steel door or something like that.”

The dog barking, which Engel assumed was a police canine, is “supposed to be under control,” he said.

“A dog barking like that is frightening,” he said.

The arrests of the journalists during the encounter drew sharp criticism of the RCMP from advocates for the freedom of the press.

James Cudmore, the director of communications for Canada’s public safety minister, Marco Mendicino, said in an emailed statement that the footage “reinforces concerns that have been raised about operations on the ground and the freedom of the press to gather and report the news.”

“The RCMP’s job is to uphold the law, ensure public safety and to respect the rights of all Canadians,” he said. “This obviously includes journalists.”

The Canadian Association of Journalists has said the courts have previously affirmed the right of journalists to report in court injunction areas, pointing to a 2019 decision made by Newfoundland and Labrador Supreme Court Justice Derek Green to dismiss civil charges related to coverage of the Muskrat Falls site protest, which had shut down work at a dam in 2016.

In July, the CAJ, along with other media organizations, also won a court challenge at the Supreme Court in B.C. on press freedom in the Fairy Creek area. The judge’s final decision agreed with the media groups, indicating the RCMP cannot interfere with coverage without providing an operational reason to do so.

Both journalists were among those held in custody for several days and transported to Prince George, B.C., for a court appearance. Prior to their release, they promised to appear in court in February on civil contempt charges.

RCMP arrested about 30 people last week at camps and roadblocks along the Morice River Forest Service Road who were attempting to stop a natural gas pipeline from being built through Wet’suwet’en territory south of Smithers.

RCMP have said the arrests featured in the footage came after 60 minutes of dialogue with those inside the structures, and that the two journalists did not identify themselves as reporters during the one-hour discussion.

But Carol Linnitt, executive editor of the Narwhal, the online publication for which Bracken was working, told the Star earlier this week she had informed the police Bracken was at the camp on assignment.

Toledano said the force knew about his presence in the area, because his production company had notified it he was there covering the events. The officer who arrested him wasn’t interested in reading his press credentials when he was taken into custody, Toledano said.

Previous protests at the site have also resulted in police detaining or trying to intimidate reporters, he said.

Police have said the two were not denied access to the area and were not told to stay in any specific area while police made arrests.

“The RCMP did not arrest anyone for being a journalist or detain anyone for performing their job,” the force said in a release Monday.

The RCMP did not respond to a request Wednesday for comment about the use of rifles and a police dog during the filmed arrests.

Sean Holman, a professor of environmental and climate journalism at the University of Victoria, said, that what is at stake in situations like these is, fundamentally, “the ability of the governed to see what their government, and the agents of that government, are doing.”

There could be a scenario where police arrest a journalist if the reporter is putting others “in immediate danger,” Holman said, but what the journalists were doing in this circumstance was providing transparency to the public.

“Journalists enjoy, or should enjoy, certain privileges and protections associated with that work,” he added, “and there appears to have been, on the basis of what we see, a breakdown in that understanding.”

It is just the latest flare up of a long-running dispute.

In 2020, after protests across Canada in support of the hereditary chiefs erupted, a memorandum of understanding was signed between the hereditary chiefs and provincial and federal governments to discuss Wet’suwet’en land and title rights. Those talks have not progressed, a spokesperson for the chiefs told the Star last week. The latest round of blockades by pipeline opponents started when Coastal GasLink was preparing to drill under the Morice River.

There have been renewed protests in different parts of the country this past week in support of the Wet’suwet’en hereditary chiefs.

One Response to “Critics call it ‘unnecessary’ and ‘excessive.’ Watch how these RCMP arrests on Wet’suwet’en territory went down”