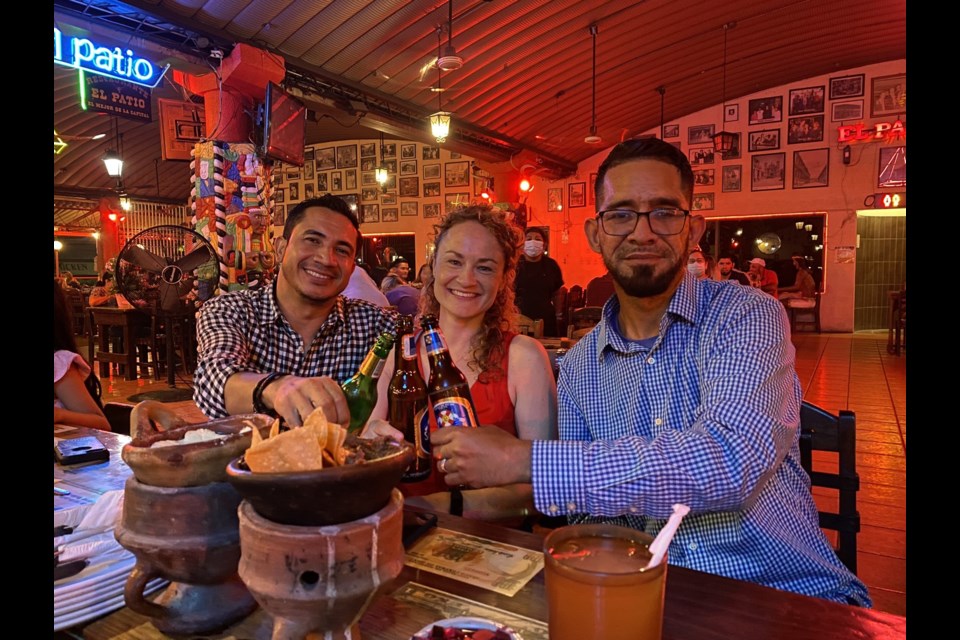 Edwin Espinal, Karen Spring, and Raul Alvarez celebrate after the two men were cleared of the trumped-up charges against them.

It’s been a dream for so long, a hope that waxed and waned as they languished in an inhumane prison, but today it is true. It is real.

Among those grasping this hope were Espinal’s family in Simcoe County.

Janet Spring, of nearby Elmvale, has been fighting for the release of her son-in-law since his arrest in 2018 on trumped-up charges related to anti-government political protests. They were accused of organized crime, arson, and other crimes.

Her daughter Karen Spring fought alongside while sharing her time between Honduras and Canada until COVID hit. She married Espinal in a concrete chapel inside the prison on Oct. 18, 2018. She brought him food, water, and news from those who were standing with him in solidarity.

Janet and Karen advocated internationally. They went to Ottawa, bent the ear of any politician who would listen. Around them rallied friends and family to form the Simcoe County Honduras Rights Monitor.

Espinal, Alvarez and several other political prisoners were locked away in a maximum-security prison called La Tolva for 19 months. Conditions were inhumane, with no access to clean water, basic hygiene, medical treatment, and enough food.

Espinal and Alvarez met in prison. Their cases were tried together in court.

They were eventually released on bail and waited months for a trial without much faith in the judicial system to offer a fair trial. But on Sept. 17, 2021, Espinal and Alvarez were cleared of all charges.

Karen Spring embraced her husband in the courtroom in Tegucigalpa, Honduras right after all the charges against him were dropped.

“Thank you to everyone for carrying us through this,” tweeted Karen from Honduras after Espinal was cleared. “We couldn’t have done it without all the solidarity, the actions and constant encouragement. This victory is yours.”

Karen, Espinal, and Alvarez celebrated together by dining out after the trial.

At home in Elmvale, Janet Spring, her husband John, and some friends anxiously awaited the verdict, fearing the worst and daring to even believe the best.

“When it did come through it was really unbelievable,” said Janet. “It takes a little while to sink in.”

She is tired and grateful for the support from friends and strangers.

“We couldn’t have done this without everyone’s help and the international solidarity,” said Janet.

She looks forward to the day when Edwin can come to Canada to visit, perhaps in time for Christmas. And though there is cause for celebration, the work is not over.

“There are more people like Edwin, a lot of them are environmental and water defenders,” said Janet.

She sees the similarities between the work of Indigenous Guapinol water defenders and the Indigenous people who protested Site 41 in Simcoe County.

“Those kinds of things happen everywhere and we have to be mindful there are political prisoners still in Honduras,” said Janet.

In Honduras, they are being arrested and charged as Edwin was. Some of them are also wrongfully imprisoned like Edwin and Raul.

“We’re going to continue working on that and bringing attention to that,” said Janet. “The right to protest anywhere is so important.”