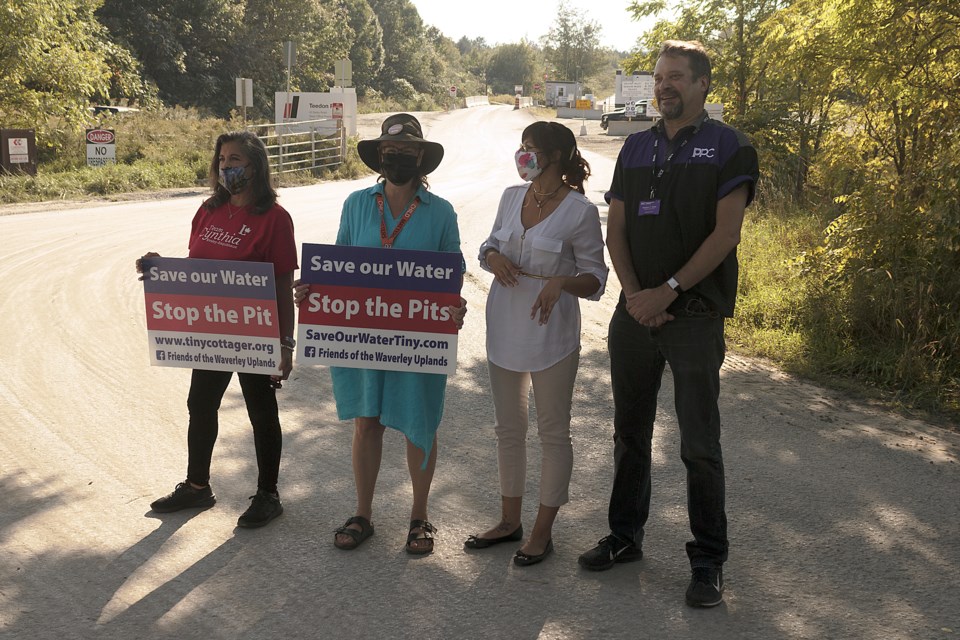 ‘We’re trying to see past any ideological blinders, because clean water is relevant to everybody,’ said organizer of Friday’s protest

The message was simple: Water unites us all.

Late Friday afternoon, more than a dozen attendees of a Teedon Pit protest gathered at 40 Darby Road near Waverley with signs and flags. The crowd was a mix of protesters, supporters, politicians and citizens.

Opposition to Teedon Pit arose from the potential that site operations could damage the valuable clean water of the Alliston Aquifer Complex which runs beneath the property, as well as throughout many of Tiny Township’s wells and water systems.

“This is a pan-partisan event,” said organizer Erik Schomann, CEO of the Simcoe North Green Party, who stated he wasn’t there in that official capacity. “We’re trying to see past any ideological blinders because clean water is relevant to everybody.”

The invitation for parties and supporters to attend the Teedon Pit demonstration was provided by Krystal Brooks (Green Party of Canada) during Wednesday night’s all-candidates meeting.

“We didn’t receive a response from the Christian Heritage Party (candidate Russ Emo), and Adam (Chambers, Conservative Party of Canada) expressed his (regrets) this morning as he has business elsewhere,” said Schomann.

Teedon Pit is an aggregate washing facility owned by Dufferin Aggregates, a division of building material and construction company CRH Canada Group Inc. Currently, up to 6.8 million litres of water per day has been authorized for extraction, which can be taken from the groundwater system for washing gravel and other on-site uses.

“This is the world’s purest water, and it needs to be protected on a national level,” Brooks told the gathering.

Stephen Makk (People’s Party of Canada) said that there hadn’t been enough transparency with Dufferin Aggregate, and he wanted to know what they were doing with the site water as well as what would happen once they were finished using it.

“We’re all in this together,” said Makk. “We’re all part of this environment, and we have to take care of it.”

Cynthia Wesley-Esquimaux (Liberal Party of Canada) remarked, “Yes it’s a business, but if the business is hurting the people around it then that business needs to be addressed.”

Janet-Lynne Durnford (New Democratic Party of Canada) told the crowd, “Anything that we can do as candidates to continue to advocate, to keep this water of the Alliston Aquifer as pure as possible, we need to do it.”

Makk added that the crowd should get to know the six candidates running, even though only one will be elected. “We may take other roles; the ones who lose are not going to quit, and we’re going to get involved in our communities.”

Among the crowd was Matthew Lund, a neighbour from the other side of French’s Hill where the operations are located. “This has been a fight in my backyard; it’s taking drinking water literally out of my kids’ mouths.

“We’ve been working with MP Bruce Stanton for the past year, trying to get this place designated as a UNESCO world heritage site. I think the more that our elected representatives are understanding of the issues here, the more that they’re going to be willing to fight for us,” said Lund.

Several in attendance, both politicians and protesters, were in support of the Indigenous community.

Tiny activist Johnny Hawke was at the event to speak to participants, and was mostly quiet through the political speeches except for Liberal candidate Wesley-Esquimaux, to whom he yelled specific words of protest; no other candidate was interrupted.

Or read the article from the Toronto Star here