Home » Community news » COLUMN: Tragedy of residential schools has much to teach us

COLUMN: Tragedy of residential schools has much to teach us 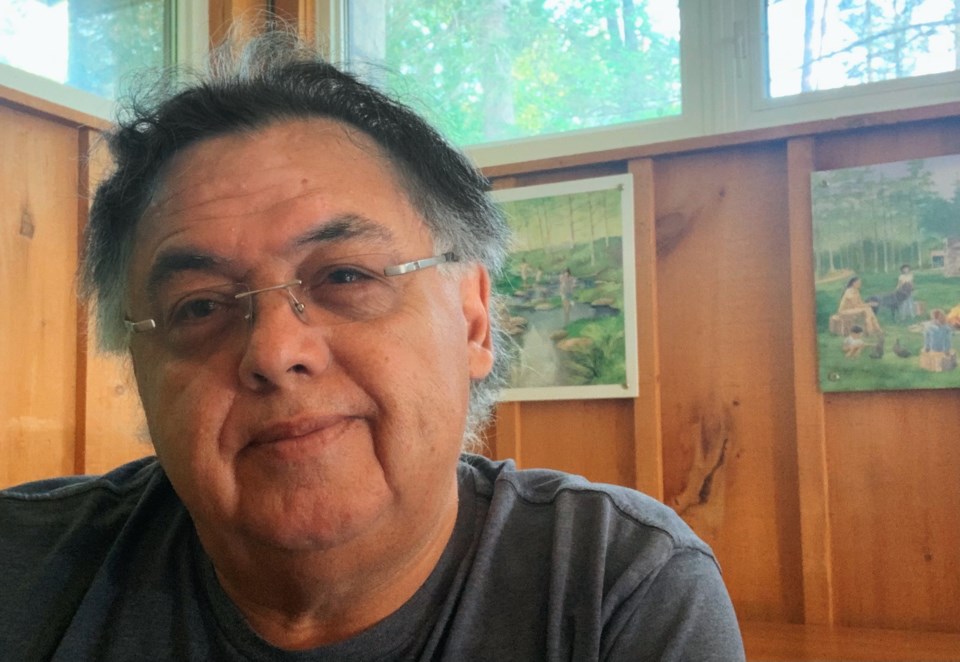 Elder Jeff Monague kept a Sacred Fire burning for four days and four nights after the bodies of 215 Indigenous children were found in an unmarked grave in Kamloops, B.C. Monague’s column will appear every other Monday.

Local elder lit Sacred Fire in memory of ancestors who died in residential schools; ‘My heart cried along with theirs as I watched them bleed sorrow into the flames’

It is early morning on May 30, 2021, and a young man, a helper, or Shkibewiss (Shkih-beh-wiss) in the Ojibwe language, grasped nervously onto the sheet of birch bark coiled in his left hand as he fumbled a striker and a marble-sized piece of quartz with his right hand.

The elder instructing him on the preparation of a Sacred Fire leaned in and reassured him with a joke and a smile. The young man relaxed, and a few deftly placed sparks onto the birch bark cone filled with dried grass and birch tree fungus, ignited into a small fire which he then placed gently into the centre of the fire pit.

This began our ceremony of a Sacred Fire which would burn for four days and four nights.

Just two days prior, on May 27, 2021, 215 Indigenous children’s bodies were found in a mass burial site on the grounds of a former Residential School in Kamloops, B.C.

It was devastating news for many. How could Canadians not have known?

For the Indigenous people living on their ancestral lands now referred to as Canada, it was equally as devastating, but it was also expected. The survivors of those so-called schools throughout every province and territory in Canada knew that this day would come. They just didn’t know when.

I first read the news online as the story broke late that night. The sadness that sits at the pit of my stomach from a lifetime of trauma welled up immediately and I struggled to gain control. I became angry – angry that this would have ever occurred in the first place. Angry that it happened here, in this country, a place that likes to boast of its human rights record.

The following day I carried that news with me like a large boulder on my back, bending me, threatening to bring me to my knees. That boulder was made of anger and was it thick with sadness.

I thought, if I’m feeling this way, then surely others are as well. They will need something to help them. A place that is safe and reassuring. So it was then that I decided we would light a Sacred Fire at my place of work, Springwater Provincial Park.

As an elder in the community, I would teach, provide care, console those who needed something to help them through this hurtful news. I decided that the Sacred Fire would be open to all, regardless of race, religion, or political affiliation. And so it was.

That morning after the young Shkibewiss had lit the fire, we had a number of Indigenous people come to say a prayer and to leave an offering of tobacco to the open flames. As the smoke rose and dissipated into the spirit realm, their words, their prayers, would be carried to the Creator, however they understood that Creator to be.

Over the next four days and four nights the fire burned and did its work. A steady stream of Indigenous people from all Nations attended to pray, to sing, even to laugh together in a safe space.

The survivors of those so-called schools came as well. My heart cried along with theirs as I watched them bleed sorrow into the flames.

By the second evening, word had spread, and we began to see more of our White brothers and sisters tentatively attending the Sacred Fire. Recognizing their hesitancy, we guided them through the protocols in the way our ancestors would have been proud to see us do.

Each apologized for knowing so little about Residential Schools, but they vowed to learn more. They vowed to read the Truth and Reconciliation Commission’s report (TRC) released in June 2015. Just 5 years prior to our Sacred Fire.

They were also angry – angry at their ignorance on the topic. Angry at never being told. Angry that their governments weren’t doing enough. Angry that it could have happened at all.

The souls of those 215 children were honoured through our ceremony of the Sacred Fire. They are the ancestors now and their souls need to be heard. They have much to teach us. We need to listen.

As I write this, that original number of 215 has risen to 5,409 bodies found at former residential school grounds across Canada and the United States.

Are we listening to them?

A National Indian Residential School Crisis Line has been set up to provide support for former students and those affected. Access emotional and crisis referral services by calling the 24-hour national crisis line: 1 (866)925-4419.

Jeff Monague is a former chief of the Beausoleil First Nation on Christian Island, former treaty research director with the Anishnabek (Union of Ontario Indians), and veteran of the Canadian Forces. Monague, who taught the Ojibwe language with the Simcoe County District School Board and Georgian College, is currently the superintendent of Springwater Provincial Park in Midhurst.