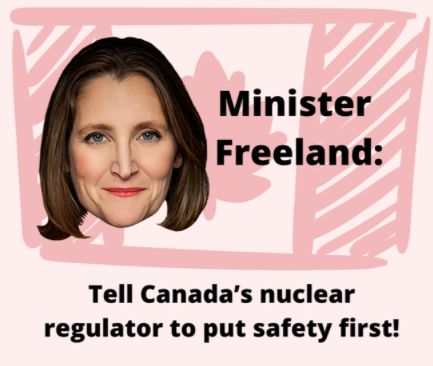 By Angela Bischoff, Director of the Ontario Clean air Alliance

In the wake of revelations about dangerous conditions discovered in the critical pressure tube system in two Bruce Nuclear reactors, the Canadian Nuclear Safety Commission (CNSC) has ordered Bruce Power and OPG to not restart any shutdown reactors before receiving approval from Commission inspectors.

This is an extraordinary admission from the CNSC, essentially suggesting that the safe operation of these reactors cannot be guaranteed, and that existing computer models meant to predict the condition of tubes used to cool the reactor core may be wildly inaccurate.

So why is the CNSC allowing reactors to continue to operate knowing what it now knows about unreliable projections of the state of these critical components? It appears that deteriorating conditions that can lead to formation and growth of through-wall cracks in tubes may be far more advanced than projected in older CANDU reactors. The CNSC must make public safety its number one priority and demand the proper inspection of all these reactors as soon as possible.

Instead, the CNSC has left it to the nuclear operators to undertake inspections only when a reactor is eventually shutdown for scheduled or unscheduled maintenance. Ontario’s nuclear stations typically operate for over a year between maintenance shutdowns. This means that some units could operate until the end of 2022 before being shutdown. This is simply not good enough, particularly for the aging Pickering reactors located in Canada’s largest urban area. The CNSC needs to set firm deadlines for shutting them down so that staff can properly inspect these reactors even if it is economically inconvenient for nuclear operators.

It has taken the CNSC months to act on the critical issue of nuclear operators not providing proper information on the state of these critical pressure tubes in aging reactors. It’s time to end half measures. The CNSC must act like this is a real potential threat to millions of people – because it is.

Please send a message to Deputy PM Chrystia Freeland – Tell her to instruct the CNSC to close Pickering and redo the flawed tests that the CNSC flagged and then ignored. We need real evidence of whether the Pickering reactors are safe to operate and we need it now.