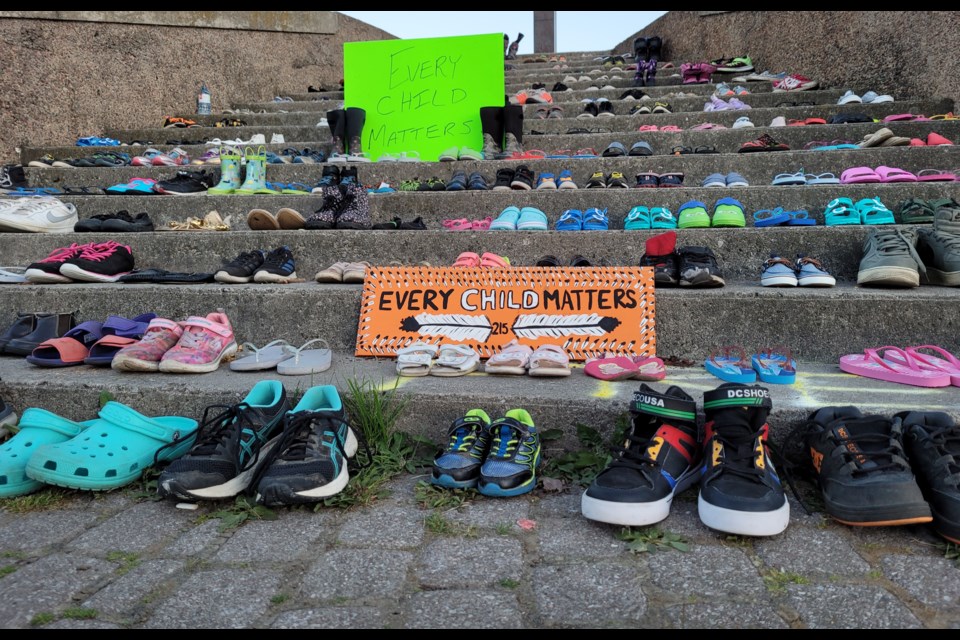 Signs are laid out and children’s shoes line the steps of the Spirit Catcher in downtown Barrie in memory of the 215 children whose bodies were found buried on the grounds of a residential school in Kamloops, B.C.Shawn Gibson/BarrieToday

‘We’ve been talking about this for years; some people are now just listening,’ says Barrie Native Friendship Centre official

Hundreds of pairs of children’s shoes line the steps of the Spirit Catcher in downtown Barrie as people mourn the deaths of 215 Indigenous children whose bodies were found buried on the grounds of one of Canada’s largest residential schools.

In a statement on Thursday, a representative of the Tk’emlúps te Secwépemc First Nation said the discovery of the children’s bodies in Kamloops, B.C., was confirmed last weekend using ground-penetrating radar.

Memorials have been erected around the country in honour of those affected by the residential school system.

Barrie Mayor Jeff Lehman tweeted on Sunday that, beginning today, flags at city hall would be “lowered to honour the memory of the 215 children found on a mass grave at the residential school in Kamloops.”

Orillia Mayor Steve Clarke said that would also be happening in Orillia.

Flags will be lowered for 215 hours, the equivalent of nine days.

Barrie Native Friendship Centre (BNFC) executive director Samantha Kinoshameg said the Spirit Catcher memorial was not organized by the BNFC, but rather a member of the community who took it upon themselves to do it.

Speaking about the discovery of the mass grave of the 215 children, Kinoshameg said the revelation, while known by Indigenous people for decades, still hit home for her.

“My father and his brother both attended a residential school, so it’s very close to me. But that would be the story for anyone because everyone has a parent or grandparent or someone they know that was put in the schools,” Kinoshameg said.

“My father didn’t talk about it. We knew he went, but he didn’t discuss what happened,” she added.

Residential schools were created to take Indigenous children away from their own culture and assimilate them into the European-Canadian way of life.

For more than a century, it is believed approximately 150,000 children were placed in residential schools across the country.

“This news of the findings isn’t really news to me or others in the community,” Kinoshameg said. “I was kind of appalled to a degree at all the posts on social Facebook, because there are people dealing with this trauma who may be upset at seeing the wave of posts.

“We’ve been talking about this for years; some people are now just listening,” she added.

There were 139 residential schools identified within the Indian Residential School Settlement Agreement. The last one closed in 1996.

Kinoshameg said the trauma faced at the school, which included physical abuse, sexual assault and severe isolation, is just the start of what families had to deal with.

“It’s the intergenerational effects that have caused such great damage,” she said. “Maybe it was just one person in your family sent to the schools, but that disconnect from their family home and cultural identity caused generations of disconnect.”

Kinoshameg suggests anyone who wants to learn more about the residential schools and their effect on Indigenous people and culture should read the Truth and Reconciliation Commission report.

For the next three days, there is also a sacred fire at Springwater Park in MIdhurst for anyone who wishes to make an offering and a prayer. COVID protocols will apply.